The History of Indonesia Economic Growth 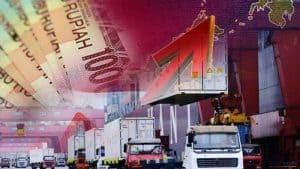 However, the Indonesian economy has also experienced negative contractions or growth, it was in 1963 in the Old Order era and in 1998 when the Asian financial crisis occurred. The occurrence of a crisis coupled with riots throughout the country made the Indonesian economy contract very deeply to -13.13%. For more information, here is a detailed history of Indonesia economic growth. We would start from after Independence day of Indonesia.

The state of the financial economy in the early days of independence was very bad, partly due to very high inflation, due to the uncontrolled circulation of more than one currency. At that time, the Indonesian government temporarily declared three currencies in effect in the territory of the Republic of Indonesia, namely the De Javasche Bank currency, the currency of the Dutch East Indies government, and the Japanese occupation currency.

The National Loan Program was carried out by the finance minister Ir. Surachman, with the approval of BP-KNIP, was carried out in July 1946. In addition, the government held the Economic Conference in February 1946 with the aim of obtaining a unanimous agreement in tackling urgent economic problems, namely: problems of food production and distribution, clothing issues, and status and administration of plantations. Soekarno as the president also formed the Kasimo Plan which was essentially about food self-sufficiency efforts with some practical implementation guidelines.

This period was called a liberal period because in politics and economic system it used liberal principles. The economy is left to the market according to the classical school theories which state laissez faire laissez passer. Though indigenous entrepreneurs were still weak and could not compete with non-local entrepreneurs, especially Chinese businessmen. In the end this system was only worsened the condition of the newly independent Indonesian economy.

The government implemented the Benteng Program (Natsir Cabinet) with an effort to nurture indigenous entrepreneurs and encourage national importers to compete with foreign import companies by restricting the import of certain goods and giving their import licenses only to indigenous importers as well as providing credit to indigenous companies so that they can participate in national economic development. But this effort failed, because of the nature of local entrepreneurs who tended to be consumptive and could not compete with non-local entrepreneurs.

As a result of the presidential decree of July 5, 1959, Indonesia adopted a system of guided democracy and Indonesia’s economic structure led to the system of etatism (everything was regulated by the government).

The first devaluation was announced on August 25, 1959, reducing the value of money as follows: Rp. 500 denomination notes to Rp. 50, Rp. 1,000 denominations up to Rp. 100, and all deposits in the bank that exceeded 25,000 were frozen. In addition, the government also formed the Economic Declaration (Dekon) to reach the stage of Indonesia’s socialist economy in a guided manner. In its implementation it has resulted in stagnation for the Indonesian economy. Even in 1961-1962 the price of goods rose 400%.

The failures in various monetary actions were compounded because the government did not save its expenses. During this time many lighthouse projects were carried out by the government, and also as a result of the politics of confrontation with Malaysia and Western countries. Again, this is also one of the consequences of the choice of using a guided democratic system that can mean that Indonesia is oriented towards the East (socialist) both in politics, economics and other fields.

The new order in Indonesia lasted from 1966 to 1998 under the leadership of Suharto. After looking at past experiences, a mixed economic system was chosen within the framework of the Pancasila democratic economic system. This is the practice of one of Keynes’s theories about limited government intervention in the economy. So, in certain conditions and problems, the market was not allowed to determine itself. For example in determining UMR and expanding employment opportunities. This was the beginning of the Keynes era in Indonesia. Government policies began to orient Keynesian theories.

Economic policies were directed at development in all fields, reflected in 8 channels of equity: basic needs, education and health, income sharing, employment opportunities, business opportunities, participation of women and young people, dissemination of development, and justice. All of them were done with the implementation of the general five-year periodic long-term (25-30 years) development pattern called Pelita (Five-year Development).

As a result, in 1984 Indonesia succeeded in self-sufficiency in rice, a reduction in poverty rates, improvements in people’s welfare indicators such as education participation rates and a decrease in infant mortality, and rapidly increasing industrialization. The government had also succeeded in promoting preventive checks to reduce the number of births through family planning and setting the minimum age for people to marry.

However, the negative impact was the damage and pollution of the environment and natural resources, economic differences between regions, between occupational groups and between groups within the community felt increasingly sharp, and the accumulation of foreign debt. Besides, development had created conglomerates and businesses that were full of corruption, collusion and nepotism. Development only prioritizes economic growth without being balanced by fair political, economic and social life.

Even though it has succeeded in increasing economic growth, national development was fundamentally fragile. As a result, when a crisis was the impact of the global economy during 1997 and 1998, Indonesia got the worst impact. Prices increased dramatically, even the rupiah exchange rate weakened rapidly. It was caused chaos in all fields, especially the economy.

After the resignation of President Soeharto, then the vice President of Bj Habibie took the rule for Indonesia. He had not carried out sharp enough maneuvers in the economic field. The policies were prioritized for controlling political stability.

Even during the leadership of President Abdurrahman Wahid, there were no significant actions to save the country from adversity. Various economic problems inherited from the new order that must be faced, including the problems of Corruption, Collusion and Nepotism, economic recovery, BUMN performance, inflation control, and maintaining the rupiah exchange rate. In fact the president was involved in the Bruneigate scandal which dropped credibility in the eyes of the public. As a result, his position was replaced by President Megawati.

During the rule under Megawati, The urgent problems to solve were economic recovery and law enforcement. The policies adopted to overcome economic problems include: the request a postponement of debt payments of US $ 5.8 billion at the 3rd Paris Club meeting and allocate foreign debt payments of Rp 116.3 trillion. Next step was privatization policy of BUMN. Privatization is selling state companies in a crisis period with the aim of protecting state companies from interfering with political forces and reducing the burden on the state. The sales results succeeded in increasing Indonesia’s economic growth to 4.1%. But this policy sparked a lot of controversy, because privatized BUMNs were sold to foreign companies.

At this time the establishment of the Corruption Eradication Commission (KPK) was also realized, but there was no concrete breakthrough in combating corruption. Whereas the existence of corruption makes many investors think twice about investing in Indonesia, and disrupt the course of national development.

In mid-October 2006, Indonesia paid off all remaining debt to the IMF of 3.2 billion US dollars. With this, Indonesia is expected to no longer follow the IMF’s agenda in determining domestic policies. However, the discourse for more debt abroad has resurfaced, after reports that the economic gap between the rich and poor has sharpened, and the number of poor people has increased from 35.10 in February 2005 to 39.05 million in March 2006. During his two years periods of president SBY from 2004-2014, economic growth did touch most of the 6%. The lowest was 4.9% in 2009 which was the impact of the global crisis that occurred in 2008.

However, President SBY or Susilo Bambang Yudhoyono’s first controversial policy was to reduce fuel subsidies, or in other words to increase fuel prices. This policy was motivated by rising world oil prices. The fuel subsidy budget was diverted to the education and health sector subsidies, as well as fields that support the improvement of community welfare. The second controversial policy was Direct Cash Assistance (BLT) for the poor people. Most BLTs do not reach the right hand, and their distribution caused various social problems.

New President s the new regulation of Economy. Various programs and breakthroughs have been launched to boost the economy, ranging from electricity megaprojects, infrastructure programs, to digital road maps. No need to turn a blind eye, the economic success in the era of President Jokowi was indeed recognized by the world.

The World Bank has even released the Ease of Doing Business 2017 rating. In its report, Indonesia’s ranking jumped significantly from the previous rating of 106 to 91 or up 15 rankings. Price equality in all parts of Indonesia is the main program of President Jokowi. Next is the continuation of mass infrastructure development in various regions: toll roads, dams, bridges, to the addition of thousands of electricity megawatts across Indonesia.

Unfortunately, due to the strengthening of the American economy, the rupiah slowly weakened to 15,000 per US $ in 2018, causing a price increase although not significant. The partial removal of fuel subsidies is also a controversial policy for Indonesians. The country’s debt is increasingly swollen, reaching more than 4000 T for the first time. However, all that is comparable to the rapid progress of infrastructure in Indonesia.

Those are the history of Indonesia economy growth. Economy in Indonesi have passed up and down. Thanks to God, Indonesia economic growth today, it has got better, although it doesn’t significantly grow much.

The List of 15 Types of Beer in Bali Indonesia