You all knew already that Indonesia has some kind of speciality in variety of foods. Some of may already ried the kinds of dishes or snacks that avalable in here, that available in so many spots, came from different forms and taste. If you want to study ore about the Indonesian traditional dishesh, best you should try the Balinese dishese first. The island has so many variants that worth to try.

Now, we’re not talking about some dishes or snacks of Bali again, but we will go to the known city  the province of Central Java called Yogyakarta. You can also find so many kinds of food in this cultural city. There are snacks and main dishes that we will introduce to you, so let’s start with the first one on the list of traditional foods of Yogyakarta. 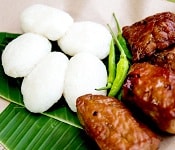 Number one on the list is Jadah Tempe or Tempeh as you know it. Maybe some of you already knew what Tempeh is, but what about Jadah? Jadah is usually some rice or white ketan (if the rice isn’t prepared) formed into an oval by the makers hand. They usually make the Jadah to the bite size, that easy to eat, and easy to chew.

Then, that Jadah combined with the additional stuff like Tempeh for this one. The kind of Tempeh is not just the ordinarty fried tempeh, but the tempeh bacem, tempeh that has the sweet taste. The combination of both of them is really good and be more completed if the ice tea is around. For the alternative, you can choose the tahu (tofu) bacem beside tempeh. 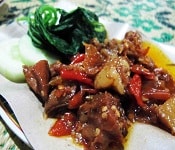 Mercon means fireworks. So, you can imagine having the burning fireworks on your tongue after eting this Oseng-oseng mercon. This is not the ordinary oseng-oseng that has the tasteful flavor, but this one is a time bomb for the spicy lovers out there. The hot is keep increasing by the time you eating it.

For you the weaklings, maybe you can try just one or two spoons of this, and have your eyes cry a  bit. Some portions can even cause diarrhea for some people, so you must eat it with full consideration for your stomach. 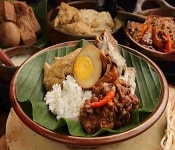 Of course, the culinary journey in the land of Central Java is not complete without tasting this special dish called Gudeg. This one is top notch, the king of all foods in Yogyakarta. Even this food became one of the special things that came from this beautiful city.

This food has considerably sweet taste, that is not too sweet for some people that don’t like the sweet taste. The delicacy is just perfect, and none can surpass it. Even though the making of it is pretty simple by using some coconut milk, but the taste is always wonderful. Ou shoudl try one plate of it before you go somewhere else. 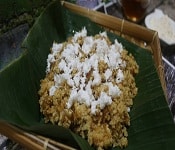 Again, this one is also can be included as one of the famous foods of Central Java. This food is more popular in the country sides, but most of town folks already love this when it finally came to the city. You can find so many Tiwuls especially in the area of Gunungkidul.

At the first, Tiwul is actually used for the alternative for rice, because back in the old days, some people can’t even afford to buy some rice for their family. Then they had an idea to make this Tiwul, that processed through the simple input, cassava. It became more good after the addition of some stuff like coconut sprinkle and sugar. 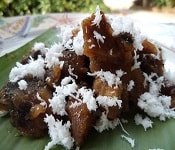 There’s the Indonesian hero called Gatot Kaca, which has no relation at all with this snack. Just like the Tiwul above, this Gatot also came from the land of Gunung Kidul, Yogyakarta. Also, it made of cassava, that can easily be found in some villages in Gunung Kidul.

The texture of Gatot is a little bit different. This one has more like jelly-ish texture, and having darker colour. Usually it combined with Tiwul as one package of snack. The combination of both has no specific name by the way. 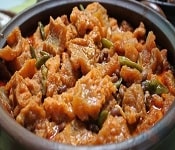 The next food on our list of traditional foods of Yogyakarta is Krecek. Krecek is actually on the Indonesian sambals, so you can include this as a must try additional food for the other main dishes of Yogyakarta that also worth some tries.

This Sambal Krecek is of course has the spicy flavor, but there’s also some sweetness in there, maing the sambal itself more tasteful. Krecek is actually used as companion for the Gudeg, because its taste is really match with it. 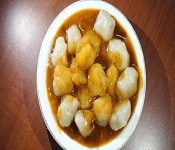 Cilok is one of the best Indonesian snack that easy to find and has familiar taste. It made from tapioca, which is also can easily be found on grocery stores. Even some of you can make some with easy by just forming the tapioca into some small balls and the fry them till cooked.

Even though Cilk firstly made from West Java, its popularity keep spreading until reaches the land of East Java. Of course, Central Java is included. In those areas, cilok has its own speciality based on the area, like the find that you can find in the city of Yogyakarta called Cilok Gajahan. You should try it too. 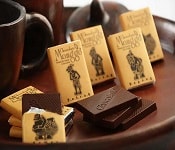 Coklat Monggo (or Monggo Chocolate) is the traditional chocolate that home made and also a percet souvenir of Yogyakarta. The store itself is pretty new, and can be considered a crowded one since the day it was opened.

With its humbilng cover, Indonesian people out there will know that this special chocolate is came from Yogyakarta. With much variants of taste, you can pick what you prefer. You can also buy some for your dearest people back home. 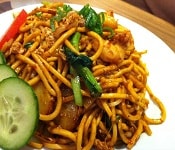 Bakmi is the same like mie or noodle in English. There are two kinds of noodle in Indonesia, the wet one or the fried one. Well, for some people the wet one is the best, because you can also taste the soup after eating the noodle.

But, this fried noodle is maybe way better than those instant wet noodles. Like many Javanese noodles, the Yogya Noodle is actually fried noddle combined with the special Javanese spices. This exlclusive noodle from Yogykarta is of course worth trying. 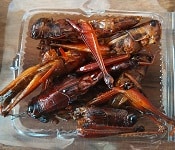 Again, another food that came from Gunung Kidul. That rea is indeed having some unique foods, like this one for example, the fried grasshopper. This food is not for the ones that eaily sick when trying some extreme stuff like this, even though the food has so many great benefits.

The vitamins contained in this fried grasshopper are good for your body, also there’s some nutrition in here that best for your metabolism. Even though it’s a bit strange, doesn’t mean that it’s a sin to consume it. Maybe, this is the time for you to do some strange unique things, starting from this.

So that’s our complete list of 20 traditional foods of Yogyakarta, are you interested enough by their beauty? All the foods are actually pretty simple to make, you just need some little efforts to start makingthem your own. They can be used as the food for the guests or maybe just being your snacks that will eaten during some chill time like watching movie or reading book.

Don’t be worry about the fat though, they are usually less dangerous like the other snacks. The traditial dishes are also worth to make, remembering how easy the method and the ingredients are. With those benefits, you can easily make them with less stress and much happiness.

20 Interesting Facts about Yogyakarta You Need to Know