The Brief History of Surabaya, Indonesia 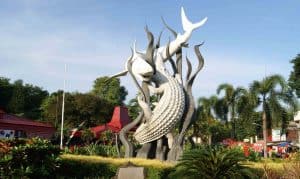 Surabaya has a population of 2,813,847 inhabitants (2014). The Surabaya area covers the Gerbangkertosusila metropolitan area with a population of nearly 10 million people, the second largest number in Indonesia after Jabodetabek. Surabaya has Juanda International Airport, Tanjung Perak Port and Ujung Port.

The name that is often called for the nickname Surabaya is the City of Heroes because its history is very calculated in the struggle to seize the independence of the Indonesian nation from the invaders. Surabaya itself is said to derive from the mythical story of the battle between sura (shark) and baya (crocodile) and eventually became the city of Surabaya.

Historical evidence shows that Surabaya existed long before the colonial era, in 1358 AD in Trowulan I inscription. In the inscription it is stated that Surabaya (Churabhaya) is still a village on the banks of the Brantas river as an important crossroads along the Brantas river. In the book of Kertagama Country written by Mpu Prapanca which tells about the journey of Baginda Hayam Wuruk in 1365 in Pupil XVII (the fifth stanza, the last line) also mentions the city of Surabaya.

Many historians deny it even though it has been written in Negarakertagama and Trowulan inscriptions they believe that Surabaya has existed long before. In his hypothesis Von Faber, Surabaya was founded in 1275 AD by King Kertanegara as a new settlement for his soldiers who succeeded in crushing the Kemuruhan revolt of 1270 AD Surabaya was formerly named Ujung Galuh, based on the alleged withdrawal by historians.

Surabaya comes from the story of fighting life and death Duke of Jayengrono and Sawunggaling. After the defeat of Tar Tar army, Raden Wijaya established a palace in Ujung Galuh and awarded the authority of Duke of Jayengrono to lead the area. As time progresses Jayengrono becomes strong and increasingly independent so threatening Majapahit sovereignty. To conquer Jayengrono diutuslah Sawunggaling who mastered the science of Sura.

The battle took place near Peneleh precisely at Kali Mas. For seven days and seven nights the battle took place tragically, both forced to die from exhaustion. Philosophically the word ‘Surabaya’ is often defined as a battle between land and water, between land and water. There is also mention that the word Surabaya derived from the mythology of Suro and Boyo fish that raises the notion that the name of Surabaya there after the event of war between Suro and Boyo.

Surabaya can not be separated from the original name Hujunggaluh, because the name change shows the existence of a motive. Motives can also indicate when the change took place. That Hujunggaluh is Surabaya which can now be researched and traced based on the meaning of his name, location and the meaning of his position in the state arena.

Judging from the meaning, the name “Hujung” or the tip of the land that jutted into the sea, the cape, we can be sure this region is on the beach. “Galuh” means gold. In the Javanese language the goldsmith and silversmiths are called: Wong grass or packs as listed in the Juynboll and Mardiwarsito dictionaries. In purbacaraka galuh is synonymous with silver. Hujunggaluh or Hujung Emas, can also be called Hujung Perak, and then become “Tanjung Perak” located at river mouth or Kali Kali (Kalimas). Well, it could be Tanjung Perak now that’s what used to be called Hujung galuh.

Initially Surabaya is only a village or rural on the banks of the river. Geographically it can be seen that Surabaya is an area that is near the sea and big river flow (Brantas, with the child). The names of villages that still exist such as Kaliasin, Kaliwaron, Kalidami, Ketabangkali, Kalikepiting, Darmokali, and so on provide evidence that explains that the Surabaya area is a region that has many streams and streams.

Surabaya was stunned by the beach, the area that became the flow of human traffic from various regions and regions. In 1612 Surabaya was already a bustling commercial airport. Surabaya as a port city has a very important function for the life of its people. At that time the river Kalimas is a river filled with boats sailing into remote parts of Surabaya. Surabaya, became the center of the Javanese meeting with people from outside the region.

Many Portuguese traders bought spices from native traders. At that time, the city was used as a hoarder of goods under the power of Trunojoyo. Then to bring valuables from the interior, they use Kali Mas river as their transportation route.

It is said that Surabaya is the gate of Majapahit Kingdom whose estuary is in Kali Mas. On May 31, 1293 became the victory of Majapahit troops against the Mongol Empire of Kublai Khan’s envoy but on that date was made as the anniversary of Surabaya. The army of Raden Wijaya who came from land was symbolized as Baya (crocodile or danger). Mongols who came from the sea were symbolized as Sura fish (brave sharks). So if it is taken literally that is dare to face the danger that comes threatening. On the day of victory is commemorated as the anniversary of Surabaya. (Also read: History of Garuda Birds)

Did you know that the name of Surabaya has existed since the Dutch East Indies? Since the colonial era the name of the city of Hero already exists and even the public has known him. The following will be explained in more detail about its history.

Initially the city of Surabaya is the capital of the Residency of Surabaya in the Dutch East Indies precisely when the colonial in this country. The areas include the now Jombang, Sidoarjo, Gresik and Mojokerto. Only after 1905 Surabaya became a municipality or called Gemeente.

And Surabaya finally served as the capital of East Java Province in 1926. Surabaya is growing very rapidly becoming the second largest modern city after Batavia or now known as Jakarta. In 1900 Surabaya was only centered around the Red Bridge but after the 1920s settlements developed such as Gubeng, Sawahan, Darmo and Ketabang. Only in 1917 facilities such as ports began to be established in this city.

Those are the long history until now it is famous at Surabaya. For further explanation about Surabaya, you must see also the facts about Surabaya Indonesia.  It is also one of recommended city to visit while you are in Indonesia.

A Brief History of Srivijaya Kingdom and Its...

A Brief History of Majapahit Kingdom – From...

Megalithic Site in Gunung Padang: A Place To...

The Growth of Technology in Indonesia (Opportunity and...