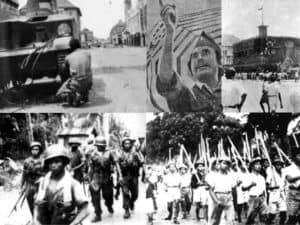 Surabaya War, commonly known as The battle of Surabaya, occurred on 10 November 1945 in Surabaya. It is considered as one of the historical moments in the history of Indonesia.

The story of Surabaya war took place in Surabaya is considered as part of chain of events that is started by the arrival of Allied Forces on 25 October 1945, headed by Brigadier General A.W.S. Mallaby.

Meanwhile, this brigade is a part of 23rd Indies Division under the command of General D.C. Hawthorn. This brigade is assigned to disarm the Japanese soldiers and rescue the soldiers of Allied Forces. This troop has 6,000 personnel in which most of the officers are British while the soldiers are the Gurkhas from Nepal who have excellent experiences in combat.

1. The Arrival of the Allied Forces

The people of East java and its government under the command of Governor R.M.T.A. Suryo are initially reluctant in accepting the arrival of Allied Forces. After that, delegations from Republic of Indonesia government conducted a meeting with Brigadier General A.W.S. Mallaby and both parties made an agreement with points as listed below.

On 26 October 1945, the Allied Forces proofed violating the agreement by conducting an ambush to Kalisosok Prison. The Allied Forces are freed the Dutch prisoners in which one of them is Colonel Huiyer. This action is followed by the distribution of pamphlets that contain the command for people of Surabaya to turn over their weapons.

The people of Surabaya and TKR (Tentara Keamanan Rakyat or Public Security Troops) are determined to drive out the Allied Forces from Indonesia and will never turn over their weapons.

On 27 October 1945, the Allied Forces with power of one platoon attacked the Kalisosok Prison in order to free a Dutch Navy Colonel named Colonel Huiyer and the officers of Relief of Allied Prisoners of War and Internees (RAPWI) who are captivated by Indonesian government.

Besides that, the Allied Forces are also occupied strategic spots in Surabaya such as Tanjung Perak Port, International Bank, and Central Post Office. These actions that are performed by Allied Forces trigger the battle. On 27 October 1945, 14.00 o’clock, the first crossfire is occurred between the Surabayan youth and the Allied Forces.

The next day, 28 October 1945, the people of Surabaya attacked almost every Allied Forces posts that are located in Surabaya. The Allied Forces became overwhelmed and then requested the help from Indonesian leaders in Jakarta to stop the battle in Surabaya.

On 31 October 1945, President Soekarno accompanied by Vice President Drs. Mohammad Hatta and Minister of Information Amir Syariffudin came to Surabaya. They then negotiated with Mallaby. Both sides formulated the result of negotiation as listed below.

The negotiation delivered the decision to stop the battle. In that negotiation, the members of Contact Committee from both sides are also selected.

After the negotiation is over, President Soekarno and his group left Surabaya. Even though the ceasefire is negotiated, the crossfire is still occurred on several spots. The Contact Committee visited the spots where the battle still occurred immediately in order to stop them.

However, when Contact Committee visited the International Bank building in Red Bridge, incident occurred. This building is still occupied by Allied Forces. TKR and paramilitary troops demanded the Mallaby’s troops to surrender. But Mallaby refused that demand. This event is followed by larger crossfire and ended with the killing of Mallaby.

4. The Death of Mallaby

After that, on 9 November 1945, the leader of Allied Forces released the ultimatum for people of Surabaya and demanded that all leaders and Indonesian people who are armed must report and turn over their weapons in spots that are specified and after that they must surrender by raising their hands. On 9 November 1945, Major General R.C. Mansergh as the successor of Mallaby released ultimatum to Indonesian people in Surabaya.

The content of this ultimatum is the demand to all people of Surabaya and their leaders to surrender and turn over their weapons, raise the white flag, and marched with hands on their head. If on 06.00 o’clock that ultimatum is still ignored, then the British will assemble all its military forces. This ultimatum is considered as the insult to the dignity of Indonesian people.

Therefore, the people of Surabaya refused this ultimatum officially through the statement that is released by Governor Suryo.

Due to the rejection of that ultimatum, the war occurred on 10 November 1945. Through the radio broadcast that is sent from Mawar Street No. 4, Bung Tomo triggered the spirit of the people of Surabaya to fight. The first crossfire occurred in Perak until 18.00 o’clock. Allied Force under the command of General Mansergh mobilized one infantry division with 10,000 to 15,000 troops which is backed up with raid from the sea by “Sussex” warship cruiser and “Mosquito” and “Thunderbolt” air fighter.

In this Surabaya war, the troops from Allied Forces mobilize more than one infantry division which is the 5th Indies Division along with the rest of Brigade Mallaby with total personnel about 15,000 troops. They are backed up by cannons on Sussex warship cruiser and several destroyers and also Mosquito and Thunderbolt fighters. On the contrary, the people of Surabaya only used casual weapons such as machete, sharpened bamboo, arrow, and weapons that are deprived from Japanese troops.

Moreover, this imbalance battle went on until December 1945 and claimed thousands casualties from the people of Surabaya. To honor the struggle of people of Surabaya, government established 10 November as Indonesian Hero’s Day.

Interesting Facts about the Surabaya War

There are several interesting facts from Surabaya war. Such as:

These are full explanation about history of Surabaya War, commonly known as Battle of Surabaya.