20 Traditional Dances in East Java You Should Know

East Java is a province located in the Eastern part of Java Island. It is an area of 47,922 km ² covering 38 cities and regencies. In the field of art and dance, East Java has a variety of dance art that has been well known by the people of Indonesia or even the world. Lots of dance areas of East Java that exists today that consists of classical folk dance, creations, or modern dance. The dance in East Java is fortunately still much preserved by the inhabitants. Here are the lists of traditional dance in East Java you need to know. 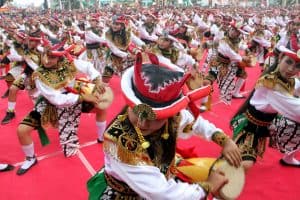 Reog Gendang is an original traditional dance that created by Tulung Agung society. The history of Reog Gendang is related to the history of Kilisuci Goddess. Narrated in ancient times, a Bugis wanted to marry the daughter of Airlangga named Dewi Kilisuci. When the man from Bugis wanted to marry her, Dewi Kilisuci also asked the Bugis man to make a Sanipan as a condition in wooing him.

Beskalan Dance is a traditional dance originating from Malang, East Java Province. This dance is usually performed at the reception of the big guests who are coming there. In addition to being a welcome dance, this dance is also often performed during Ludruk’s performance as an opening dance after Remo Dance. Beskalan dance is a famous traditional dance in Malang. In the show, this Beskalan Dance will usually be played by 4 (four) female dancers. But on certain events can also be played by 2 (two) people, there are even more than 4 (four) people. 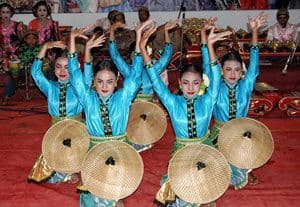 Caping Ngancak dance is one of the traditional dances from Lamongan district, East Java province. This dance depicts the activities of the farmers in the fields. In this dance dancers dance like a farmer who uses a hat or hat made of woven bamboo as an attribute in the dance. Caping Ngancak dance is a famous traditional dance from Lamongan district.

In the show, this dance is performed by dancers in groups. This dance will usually be performed by 9 (nine) women dancers with the formation and also movement that is compact, lively and full of meaning. The movement in this dance depicts the activities of the farmers in the fields starting from planting rice to harvest. This dance is more dominated by hand gestures and also a game of caping as an attribute in their dancing. The movement is done in a compact and neat so it will look interesting. 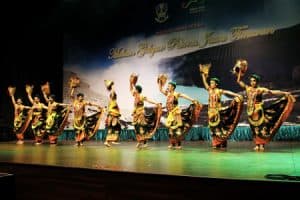 Gandrung Marsan Dance is a traditional dance originated from Banyuwangi, East Java Province. Historically, this dance is derived from art that developed in the year 1890. At that time, there is an art presented by a group of men aged 7-14 years. This art is accompanied by drum musical instruments and also tambourine. They perform from one village to another.

One of the dancers who continue to act in art until the age reaches 40 years of Marsan. The figure of Marsan was so admired. As a dancer, she is known to be very good at playing a role as a woman. Not only that. The admiration of the people of Marsan is also due to the moral message conveyed in every dance performed. At that time, there was often competition between dancers. Until not infrequently, there was a fight in the show. 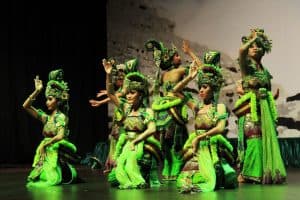 Glipang Dance is a traditional dance from Probolinggo, East Java Province. This dance depicts the daily life of society. Glipang dance is a blend of Islamic culture and Javanese culture that is packed into a dance. According to historical sources, Glipang Dance was first created by a young immigrant from Madura who lives in the village of Pendil, in Probolinggo district called Seno Truno. Seno Truno was originally a foreman of a sugarcane logger at the Dutch Colonial Sugar Factory in Probolinggo. Due to the Dutch colonial attitude that arbitrarily made Seno Truno then decided to quit his job. Then he created a dance as a form of resistance to the Dutch colonizers. 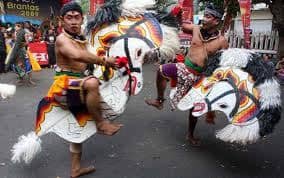 Jaranan dance is a traditional dance performed by the dancers by riding a mock horse made of woven bamboo. In addition to the rich value of art and culture, this dance is also very thick to the impression of magical nuances and spiritual values. Jaranan Dance is a very famous traditional art in East Java Province. In some areas of East Java province this jaranan art is still alive and preserved. One of them is in Kediri Regency which makes this dance as a traditional dance typical there.

In the show, the dance is performed by a group of dancers in soldier clothes and also riding a braid horse. While riding the horse the dancers dance with a dynamic movement and in harmony with the music pengiringnya. In addition to dancing they will also play horse braids with varied movements. In this Jaranan Dance performance is also accompanied by various gamelan music such as kenong, kendang, gong, and others. 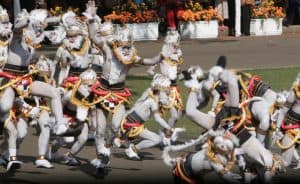 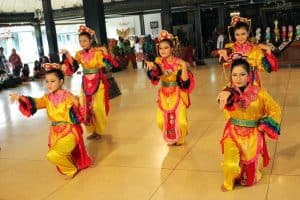 Lenggang Dance is a typical welcome dance from Surabaya, East Java Province. This dance is played by a dancer who dances with a beautiful and elegant movement. Lenggang Dance Surabaya is an adaptation of the previous art development of Tanda Tanda’an or Ledek Tayub and also Sandur Madura. Historically, this dance was created by Dimas Pramuka Admaji in 1995. At that time he was asked to create a welcoming dance to enliven the anniversary of Surabaya. The request was then welcomed by Dimas Pramuka Admaji which included various elements of culture and also art in the city of Surabaya in the dance creation. 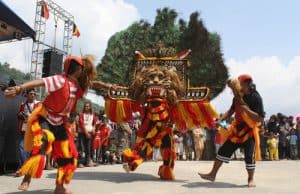 Reog Ponorogo is often performed during occasions such as khitanan, weddings, national holidays, and annual festivals organized by the local government. Festivals that are often held by the government are like the National Reog, Reog Mini Nasinonal, and also the show at the time of full moon which is located in the square ponorogo district. However, the National Reog Festival is always held at the time of entering the month of Maharam or often called the month of Suro in Javanese tradition. This reog ponorogo staging is a series of birthday of Ponorogo city or also Grebeg Suro event. 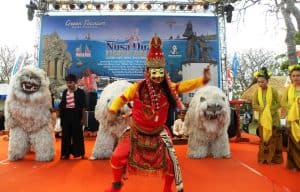 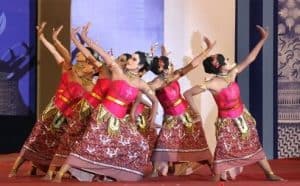 Thengul Dance is a traditional dance inspired by Wayang thengul from Bojonegoro, East Java Province. In this dance is usually performed dancers in groups with movements, expressions and costumes that resemble the Thengul Puppet. Thengul dance is in addition created for the art, as well as a form of appreciation and effort in raising the art of Thengul Puppet which is currently almost drowned.

Thengul dance is usually displayed by 7 (seven) female dancers in costume and also makeup of white face as well as dolls. The dancer is dancing like a Thengul Puppet with rigid movements and facial expressions that look funny to create an impression of humor and always entertaining in every show. Movement and facial expressions make the special characteristic of this Thengul Dance. 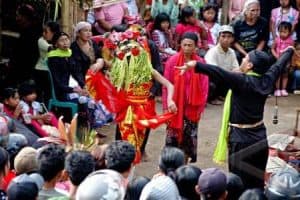 Seblang is one of the traditions of the Osing community in Banyuwangi, East Java. This tradition is a tradition as a clean village needs and reject the reinforcement to keep the village safe and peaceful. Tradition seblang can only be found in two villages within the district Glagah, Banyuwangi, namely the village of Bakungan and Bysari.

Seblang is basically a typical dance of the Osing tribe in Banyuwangi District. There is a resemblance between this Seblang Dance with Sanghyang ritual in Bali Province and Sintren dance ritual in Cirebon.

Those are the dances in East Java. Once you have a leisure time while visiting East Java, seeing one of these traditional dance could be a nice thing to do. It means you have helped us to preserve one of the Javanese culture.