Military forces or defense forces are the elite forces that are most reliable in maintaining the sovereignty of a country. So it’s no wonder, so many countries are trying to optimize human resources and military equipment so that their country is respected by the enemy.

The troops like this are required to master many things, for example trained in mastering heavy terrain and also the use of weapons, martial arts experts to be good at using technology. The superiority of an elite team is a pride for a country. In Indonesia, there are a number of special elite forces formed to safeguard the country’s security. Here are most Elite Indonesian special force.

The greatness of the elite Kopassus troops is highly respected by the World. Based on the 2008 edition of Discovery Channel Military’s elite elite forces, Kopassus is in the position of the three world’s elite forces. Several operations were successfully carried out by Kopasus such as the Woyla aircraft liberation operation from piracy in 1981. The operation succeeded in freeing the Woyla aircraft and its contents which were signaled by terrorists.

The hostage release operation in Mapenduma Papua from OPM, this operation took place on 8 January 1996 to 9 May 1996. For approximately 130 days, the Kopasus managed to rescue hostages consisting of 26 people, most of whom were researchers in the 95th Lorentz Expedition. The greatness of Kopasus is able to outperform other countries. Kopasus, who is a contingent of shooting the Army, succeeded in becoming the General Champion 12 times in the ASEAN Armies Rifle Meet (AARM) event. And at the world level Kopasus was also able to win the overall champion in the Australian Army Skill at Arms Meeting (AASAM) competition for the past 10 years.

This special unit, also known as the Satbravo-90 (formerly Bravo 90 Detachment), is a special operating unit of the Special Forces Corps (Kopaskhas) which is located under the Korpaskhas Commander.

The Satbravo-90 was formed around 1990 in the era of Marsma TNI Maman Suparman’s leadership as the Commander of Puspakhas at that time. The specialization of the Satbravo-90 is to cripple the enemy alustsista in supporting operations and prosecution of terror and piracy in the air. The Satbravo-90 has the motto ‘Faithful, Skilled, Successful’. 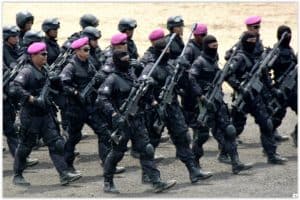 This elite force, abbreviated as Denjaka, is a special detachment in dealing with terror in the sea aspect. Denjaka is a combination of personnel from two special force of the Navy, the Katak Forces Command (Kopaska) and the Marine Corps Amphibious Battalion (Yontaifib). Denjaka was formed on November 13, 1984.

Denjaka’s ability is not only for fighting but also as a reliable combat intelligence unit. As an executing element, Denjaka soldiers were challenged to have the operational readiness of speed mobility, confidentiality, and the highest level of operation and field of operation in the form of ships, offshore installations and coastal areas. The troops, nicknamed the sea ghosts, also have the skills to approach targets by sea, vertical and air.

Detailed information about the Gultor or Terror Management Unit is very confidential. We will not know for sure who the members, what weapons they use, and what mission they will carry out. Even so, it can be known with certainty if the Gultor consists of elect people.

Gultor is a unit or group within Kopassus. This force was formed since 1982 with the initial goal in response to the rampant aircraft piracy in the 80s. The troops themselves were first formed by two army officers who specifically studied the GSG-9 or German elite forces. Gultor is now recognized as one of the most progressive elite forces in the world. 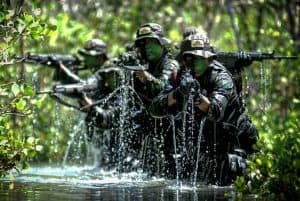 The Baatalyon Intai Amfibi or Yontaifib Battalion is a special force formed within the Marine Corps body. Of course the members are elect people who have passed many tests that are not easy to pass. The special force has tasks related to the marine aspect. As the examples: conducting combat diving operations, underwater infiltration and demolition, sabotage, to reconnaissance.

The training of a member of the Yontaifib was also very heavy. At the beginning of their admission, they had to go through one of the tough tests, where Yontaifib students were tied up with their hands and legs and then told to swim 3 kilometers away. This is only a part of the many crazy exercises of the Yontaifib members. Even in special training, the conditions are likened to being authentic, where life is a bet.

If the Marines have Denjaka, the Air Force also does not want to lose by forming a special unit named Denbravo. This one force is formed from Paskhas members who have been rigorously selected. Denbravo itself is arguably the youngest elite force in Indonesia, even though their abilities are very, very mature.

Denbravo is more focused on the air sector. Where their main mission deployed is to sabotage enemy air installations, to intelligence. Denbravo was also more resilient when they were invited to use all TNI AU defense equipment. As the example is tactical car to warplanes. 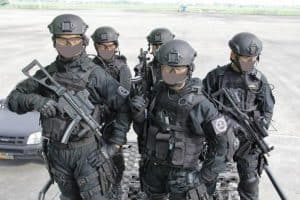 Tontaipur or stands from Pleton Intai Tempur is an elite force inside Kostrad. A unique fact about Tontaipur is that the number is not much. This can indicate that the selection to become a member is so extraordinarily difficult. Tontaipur itself is not only required to be good at land, but also land and sea. So, this army can be considered special and complete.

Not only good at combat in three aspects or military language, Tri Matra, Tontaipur members were also taught how to carry out intelligence and sabotage actions. The beginning of the formation of Tontaipur was at the initiative of Lieutenant General TNI Ryamizard to form a special army of small numbers but extraordinary abilities. 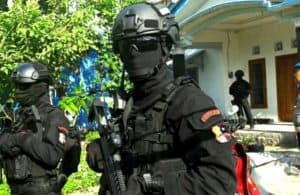 The existence of the Special Detachment 88 was not separated from the terrorist acts of the Bali Bombing on 12 October 2002. Long before the unfortunate event emerged, Indonesia did not yet have a special force to deal with terrorism. In 2003, the Polri Anti Terror Special Detachment 88 was formed or commonly referred to as Detachment 88. The number 88 itself comes from the word ATA (Anti-Terrorism Act), which if pronounced in English reads Ei Ti Ekt (Eighty Eight). Densus 88 was then inaugurated on August 26, 2004.

Densus 88 members are required to have a number of qualifications in the form of skills in handling bomb threats, hostage taking, security intelligence, detection, analysis and counterintelligence. In addition, members of Densus 88 are also required to have good negotiation skills.

Long before Detachment 88 was established, the National Police had the Brimob Corps (Mobile Brigade). This unit is one of the oldest units in the Polri organization. This unity played a role during the Japanese occupation. Brimob fought in the battle of 10 November 1945 in Surabaya.

In carrying out its duties, Brimob plays a role in dealing with terrorism, handling riots, high-risk law enforcement, search and rescue (SAR), rescue hostages, and defusing bombs (EOD). To maximize its duties, Brimob had two main regiments, namely Gagana and a pioneer. If traced further, the gegana regiment is divided into five detachments, each of which has the main capability, namely: Intelligence, Jibom, Anti-Anarchist, KBR, and Anti-terror.

Those are most elite Indonesian special force. Some of them has even been recognized as the strongest force in the world.