According to the neighbor countries like Malaysia and Australia, Indonesian Air Force is a great and respected air force due to its troops and equipment. 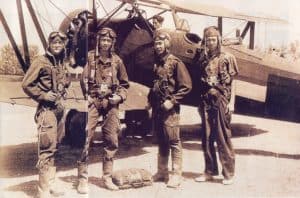 Indonesian Air Force was born simultaneously with the founding of the People’s Security Force (BKR) on August 23, 1945.

At that time they used planes which were taken from Japanese soldiers such as Cureng, Nishikoren, and Hayabusha. Then after a few years later, the Air Force received Dutch air force assets including aircraft, hangars, maintenance depots, and other logistic depots. (See also: New Years in Indonesia)

In accordance with the legal basis in Indonesia, the Indonesian Air Force is tasked for:

Indonesian Air Force is currently strengthened by two forces who both have different duties and functions that consists of: 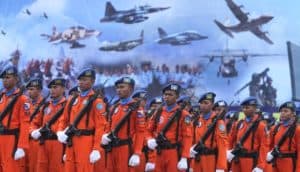 The orange beret troop that used to be very famous by the name of the Fast Movement Corps (PGT) is a qualified army for Para-Commando. It is an offensive combat troop air of Indonesian Air Force which consists of:

b. Air Force Base Defense and Security Unit (Defensive) 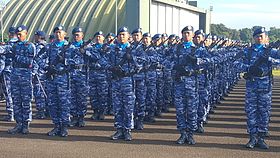 These troops had previously existed in every main air-base throughout Indonesia whose members were formed by taking staffs from every base with an officer as Head of Air Force Base Defense and Security Unit. In the future, these internal units will be formed into an Air Force Military Police (POM-AU). The unit consists of:

In the future is ship for radar deployment that is located in the mid-ocean that there is no island and also to mobilize personnel and equipment to remote radar units that cannot be landed by aircraft.

Indonesian Air Force orders some the main equipment of new weapon system (Alutsista) in recent years and will show it to the public on the anniversary of the Indonesian Armed Force on 5 October.
Qualitatively the needs of defense equipment and its deployment are arranged based on the tasks to carry out the air operations in order to uphold sovereignty on land and at sea, therefore it should ideally have: 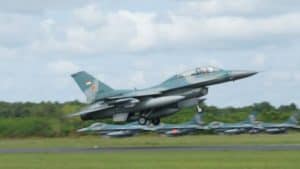 A.  Aircrafts and Helicopters

Indonesian Air Force has total of 110 combat aircrafts. The inventory includes SU-27 and SU-30 as the main fighters (from Russia) supplemented by F-16 Fighting Falcons (from the USA). The Indonesian Air Force is also currently engaging in talks with Russia to purchase 8 Sukhoi SU-35 as a replacement for the already-aging US Northrop F-5 Tiger light fighters in its inventory. (See also: Volcanoes in Indonesia)

The aircrafts in Indonesian Air Force are differentiated according to its function as below:

Combat aircraft is an aircraft that is used in a military operation. This type of aircraft is designed to destroy enemy equipment using their own aircraft ordnance. It is normally developed and produced only by military forces. Indonesian Air Force purchases their combat aircraft from USA, Russia, Brazil, and United Kingdom.

This type of aircraft is used to operate for long duration over water in maritime patrol roles. It is used by maritime for anti-submarine warfare, anti-ship warfare, and also for search and rescue (SAR). Indonesia has 3 maritime patrols in total. They are purchased from United States and Spain.

This aircrafts are typically fixed wing and rotary wing cargo aircraft that are used to airlift troops, weapons, and other military equipments. It is usually flight to any area of military operations but usually outside the commercial flight routes. Indonesia has some military transport aircraft which also includes some helicopters. These aircrafts are purchased from Europe and USA.

Trainer aircraft is an aircraft that is designed specifically to facilitate flight training of pilots and aircrews. Indonesia has some trainer aircrafts includes helicopters that are purchased from Europe, USA, and Republic of Korea.

B. Radar and Missile

Those are complete explanation about Indonesian Air Force Strength .

Indonesian Beliefs and Values – (#6 is Important)