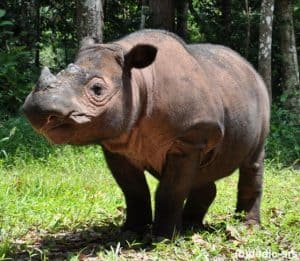 It is one of the 5 species of rhinoceros that still survive from extinction.

The other kinds of survived rhino in the world are Javan Rhino, Indian rhinoceros, African black rhinoceros and African white rhinoceros.

Sumatran rhinoceros is one of the natural wealth of the earth that the population only exists in Indonesia. Its presence in Peninsular Malaysia has been declared as extinct. Because Sabah has only a small and isolated population, it can only breed in captivity, if it could be successful. Furthermore, these are the interesting facts of Sumatran Rhinoceros.

The Sumatran Rhinoceros is 120 to 145 Cm in size, and about 250 Cm in length. The Sumatran rhino has two horns. The length of the front horn is about 15-25 Cm, while the rear horn is smaller with a size of about 10 Cm. The horns in female rhinos are smaller and shorter than the male rhinoceros.

The typical characteristic of the Sumatran Rhinoceros is a fairly long fur covering the entire body. The hair is grown from the outer side of the front foot, stomach, up on both hind legs. In fact, for the Sumatran Rhinos living in the wild, the fur is very dense than the ones living in captivity. This typical Sumatran rhinoceros is the only hairy rhino in the world.

The Sumatran rhino is the only Asian rhino that has two horns. Unlike the Javan rhinoceros, which is only hairy in the ears and the tip of the tail, the Sumatran rhino is hairy almost in all parts of its body. No wonder if he was nicknamed hairy rhino (haired rhino). Physical size is also considered the smallest compared to other rhino species. Body weight is not more than a ton and height of his body was under 150 cm.

It is estimated that this herbivorous population of two horns is less than 200 tails. It is no wonder if the International Union for Conservation of Nature, (IUCN) Redlist then includes this species in the critically endangered list. The Sumatran rhino officially holds as one of Endangered Animals in Indonesia since 1996.

The location of the Sumatran Rhinoceros is now increasingly reduced. For comparison, based on records at the beginning of the Indonesian Rhinoceros Conservation Strategy in 1994, there are 17 rhinos enclosure in Sumatra Island.

For many years, the hunting of the Sumatran rhinos for horns and other body parts – usually believed to be traditional drug substances – has resulted in the declining population of the animals. Currently, the loss of forest habitat poses a major threat to survival of the remaining Sumatran rhinoceros.

The destruction of forests accompanied by various unsustainable activities by humans has led to a further deterioration of the Sumatran rhino population towards extinction.

Andatu is the first rhino to be born outside its habitat, since breeding conservation efforts have been conducted in Asia since 124 years ago.

The lifetime of the rhino is not long. The lifespan of rhinos that only range from 35-40 years, making the existence of this rhino increasingly threatened not to mention there are some cases found in rhinoceros treated in preservation area will mostly die at the age under 35 years.

If the maximal age of the rhinoceros is only 35 years and the reproductive period begins at 7 years of age with 18 months of pregnancy, the rhinoceros has only 25 years to reproduce as well as the child rhino age for at least 1 year, each parent will likely only produce a maximum of 4-5 individual rhino children throughout his life.

The Sumatran rhino also has a fairly shy nature. They also prefer to live in a small group and generally prefer to be alone. The nature of those who like to live alone seems to make it difficult for scientists to breed them. That is why this type of rhinoceros is currently very little populated. The Sumatran rhino (Dicerorhinus sumatrensis) is an exploratory animal that lives in small groups although it generally lives solitary.

WWF-Indonesia is also intensifying efforts to conserve the Sumatran Rhino in the area of Leuser Ecosystem Management Agency, Aceh. Various research activities were conducted to identify the distribution and quality of rhino habitat.

Meanwhile, in an effort to secure the area, according to Adhi, the involvement of local people who have lived longer around the habitat of Rhinos can be an effective “fence” in maintaining the rhino population.

Those are the ten interesting facts of Sumatran Rhinoceros. Although the population is endangered, the good news comes from Ratu. It, a 9-year-old female Sumatran rhino is confirmed pregnant at Penagkaran at Na Kanan Way Park.

The rhino pregnancy in captivity that was the first time in 112 years gave little hope for the development of Sumatran Rhinoceros and Javan Rhinos in Indonesia.