10 Most Popular Streets in Jakarta

When visiting the capital city of Jakarta stuck in traffic jam on the streets there is a common thing. Not impossible, if in rush hour starting at 7 am-9 am, and at 4 pm-8pm, the highway in the capital is like the threat of death number two. Not infrequently, you will even get lost while walking the streets in Jakarta. This is because Jakarta traffic activity is very crowded and too many traffic signs that must be obeyed. Prior to Jakarta, it’s good to recognize the names of the roads in Jakarta. Here is a list of the most famous street names in Jakarta.

Jendral Sudirman Sudirman or better known as Jalan Sudirman is one of the main streets in Jakarta. It is located between the West and the Central City of Jakarta that makes this road seems so busy. Various office and economic activities are spinning rapidly here. There aee also various supporting facilities such as office buildings, shopping centers, entertainment centers, as well as various apartments in Sudirman become a sign of the bustle and development of this one area. Sudirman also refers to the central business district or so-called Financial District.

Muhammad Husni Thamrin street or known as Jalan Thamrin is the name of one of the main streets of Jakarta. It is also the largest Business Center in Indonesia. In addition, every Sunday morning the road is also closed for vehicles for the Car Free Day area. That’s why on Sunday morning many people do exercise on along this road. The sudden market also spill over into this place. The name of the street is taken from the name of a National Hero of Indonesia namely Mohammad Husni Thamrin. Jalan MH Thamrin stretches along 2.5 KM from Bunderan Fountain of Bank Indonesia, Gambir, Gambir, Central Jakarta to Dukuh Atas, Tanah Abang, Central Jakarta. 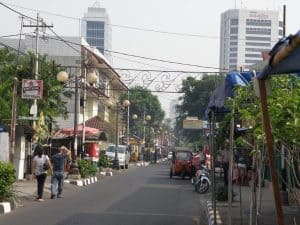 Jalan Jaksa is a 400 meter short road in Central Jakarta. Initially, this road has existed since the Dutch era, when students of Rechts Hogeschool Batavia (Jakarta Legal Academy) settled here while studying. Jalan Jaksa is increasingly recognized by foreign tourists for entering and being recorded in well-known travel guides such as Lonely Planet. Became the cheapest stopover for world travelers in Jakarta, which is around Rp75.000 – Rp100.000. If you want a standard AC accommodation you can pay a maximum of Rp 250,000.

Currently, the road prosecutors not only become the center of tongkrongan bule-bule, young children of Jakarta and even backpacker area enliven this street every night. They joined in and joked together while listening to live music at one of the local cafe. The food is also fairly standard and cheap. All well-equipped, there is chinese food, japanese, western, indian food, as well as local food. 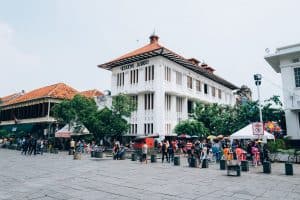 Jalan Taman Fatahillah also became one of the most famous street in Jakarta precisely in West Jakarta. On this street there is Kota Tua area which became one of the tourist bersajarah in Indonesia. The Kota Tua is a tourist place that contains a lot of history and contains a lot of knowledge. There are many museums you can visit such as the Fatahillah Museum, Sunda Kelapa Harbor, Bank Indonesia Museum, and the Museum of Ceramics. Location This street is also strategic because it is adjacent to Jakarta Kota Station and Asemka

Sabang is a street name in central Jakarta that has long been known as a hangout center and culinary center. Year after year, the residents of Sabang also alternately come and go. But still quite a lot that still exist in this increasingly heavy competition arena. As the sun sinks, the sidewalks there quickly become lined with tent stalls. Jalan Sabang is synonymous with the center of Jakarta’s roadside hawker, where most shops operate until small hours. This is the attraction of the area. If you go to Jakarta and want to try culinary, I would recommend this plac to you. 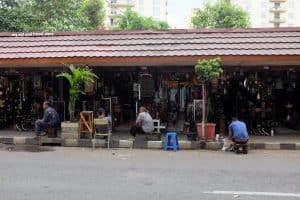 Surabaya street is not a street in Surabaya, it is one of the most popular street in Jakarta. Located in Jakarta’s luxury residential area, the stalls are crowded with various ancient objects, handbags and luggage imported second hand lined on Jalan Surabaya, Menteng, Jakarta.Letaknya strategic, in the office area, making the Road Surabaya is also quite easy to reach.

A variety of antique decorations for the house such as patterned plates for wall hangings can be found in the shops on this street. Because the one-way traffic path makes the Road Surabaya is not too crowded so there is not too much noise. The atmosphere on this street is clean and neat, as it may be in an elite residential area.

Beside famous as antiques market, Jalan Surabaya is also famous for the luggage market. Various suitcases and bags of different shapes, sizes and uses are available here. There are also various options, want production in the country or abroad. For the price, all the traders in this market do not set a fixed price. 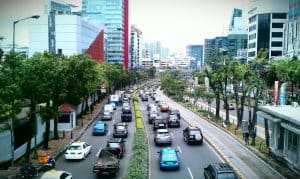 Jalan HR Rasuna Said or Jalan Rasuna Said is the name of one of the main streets of Jakarta and is also a business center or called Financial District (Sudirman-Thamrin-Kuningan). This road is also one of the most crowded roads in Jakata causing severe traffic jam. The traffic jam in the area is due to its strategic location and the crossing of vehicles that want to go to Pasar Minggu, Blok M, and to Kuningan. This street name is taken from the name of a National Hero of Indonesia, Rasuna Said. This road stretches along 4.9 kilometers from Menteng, Menteng, Central Jakarta to Tendean, Mampang Prapatan, South Jakarta.

Unlike the road in general in jakarta, this one area is most different. The famous Mangga Besar Street in West Jakarta is not only big and famous for its nightly entertainment only. Not only news about his dark life. Mango Besar is also famous for its delectable food. It is also a heaven for culinary lovers. By 10 o’clock, the night world began to open. Lots of hotels and discotheques from lower class to five stars are also available. Even a massage and spa plus is also here. Some female sex workers start wandering by the side of the road. The cars of sex-worshipers were parked by the side of the road. Some kiosks selling sex equipment are also here. 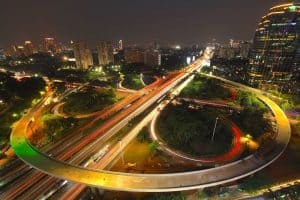 Simpang Susun Semanggi was inaugurated in 2017. Non-toll road flyover (JLNT) with a length of 1,622 meters of this road became the first in Indonesia to use the longest span on Jakarta’s toll road in full curvy (hyperbolic). Its existence is expected to break down the congestion that occurred around Semanggi area up to 30 percent. Moreover, during this Semanggi area became the meeting point of the flow of vehicles from various directions. As a result, there are frequent congestion in the area, either morning, afternoon, and evening. Semanggi bridge turned out to have a long history. As the name implies, the bridge built upon the initiation of Sukarno, the first President of the Republic of Indonesia, has a unique form because it resembles a clover leaf. 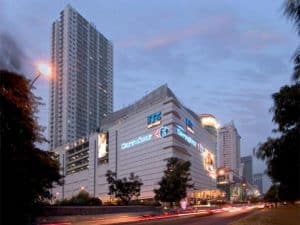 Profesor Doktor Satrio Street or Jalan Satrio is the name of one of Jakarta’s main streets and is also a Business Center and Shopping Center. There are several tall and elegant shopping centers here. In addition, several apartments and elite housing also turu enliven this area. This street name was taken from the name of the Minister of Health of the Republic of Indonesia to the 10th Major General (Ret.) Prof. dr. Satrio. This road extends along 2.25 KM from Karet Sudirman, Tanah Abang, Central Jakarta to Tunnel Casablanca, Kuningan, South Jakarta and located in the Golden Triangle area of Jakarta.