People often say that expensive food in a five-star restaurant is a prestige-filled meal. Made from selected ingredients and processed by the hands of chefs who have the world-class certificate to make whatever food they serve that’s considered good by the community. In fact, if we can be honest, then the most suitable food for the people of Indonesia is not that served in the famous restaurant. For our people’s local tongues, a culinary paradise actually lies in a typical street food 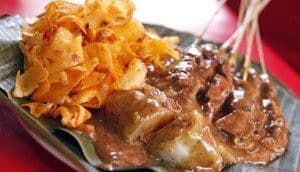 The only menu sold in this street vendor is just Satay Padang. But you can choose which satay you’d like, there is various stuff you can order such as Tongue Satay, Meat Satay, Heart Satay and Mix Satay. What is obvious is that Padang Ajo Ramon satay has a heavenly flavored taste that’s so delicious and has tender meat. The gravy is also abundant with its thick, and crunchy taste. When the satay is finished then you can try its delicious crackers with a sauce that acts as your desserts. 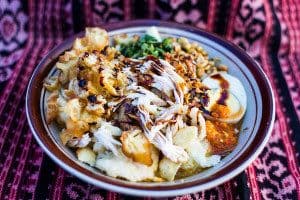 Blessed are those who live in Kelapa Gading because you can enjoy the most delicious Chicken Porridge every afternoon. Its location is opposite Al Azhar Kelapa Gading and opens only from 4 pm to 7 pm. But when the place is crowded then the porridge there is sold out even at 6 pm.

Naturally, this Chicken Porridge is very delicious and even its topping is so many that it will overflow when you stirred it not too carefully. Although it has the larger portions the price is cheap just like other typical street food and costs only 12 thousand rupiahs. This porridge uses a yellow sauce and added quail eggs satay or gut satay to increase its flavor. 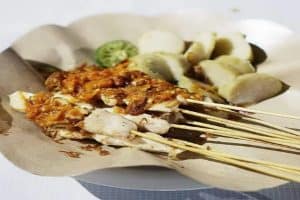 Taichan satay is everywhere, but if asked which one is most delicious, then Taichan satay by Bang Ochit in Senayan is the answer. The place is just a tent stalls erected in the street of Asia Afrika, but those who came there are many. The queue of people buying is even already existed before the shop opening. Just like Taichan Satay in general, this satay is white, not brown like usual Satay.

What makes this satay difference than other competitors is that the marinade topping does not use peanut sauce, but instead uses chili sauce and lemon for its spiciness. So for those of you who don’t want to feel spicy then you can add lontong with the satay to make it less hot. 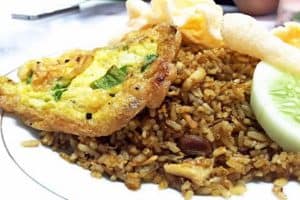 The Fried Rice serve here is already delicious, but how would it taste when full of spices? Certainly more favorable. Many people don’t mind queuing for long hours to get a plate of Nasi Goreng Kebuli Apjay served in front of them, the aroma that’s pushed into their nose will make them super happy.

Moreover, the spicing is really tasty and it was fitting and the meat was not smelly either. With the addition of pickles and emping crackers then make this food increasingly addictive. 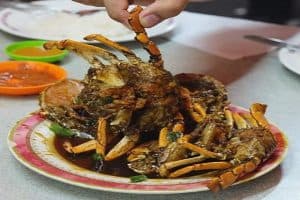 Eating great tasting seafood does not have to be an expensive experience. You can try it by coming to Seafood Santa 68 in Senopati. Although only a tent stalls, all the food there in this seafood restaurant is delicious. You can have a taste of food that makes many people willing to queue for long hours.

Meanwhile, you can try to order Crab Sauce Padang, the price is cheap and the contents are brimming full with topping. The Seasoning sauce of the filling can even be tasted into the crab meat. They also have Pomfret Fish that became the favorite menu of many people. Roasted fish meat is perfectly cooked and the original sauce makes customer addictive. 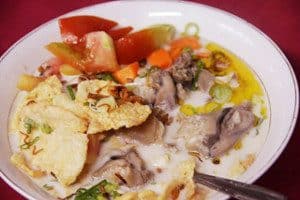 The tent stalls of this street vendor are erected on Musi Street Roxy area. If you want a goat meat soup then you can try Dudung Roxy Goat Soup that is highly recommended. Basically, this is Soto Betawi which contains goat meat and it does not smelly at all, so you can comfortably consume it.

Then, the soup of coconut milk is so soothing and not too thick, and very tasty to your taste buds. Also the soup is prepared in rich savory broth with spices and seasoning similar to another Indonesian favorite like oxtail soup. 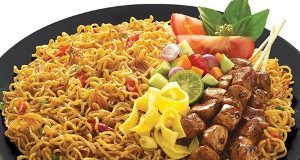 Italian spaghetti is a food that’s famous around the world. However, for the tongue of the Indonesian people, then the instant noodles made from Burjo places are obviously winning the heart of many Indonesian as their preferred delicacy.

The pleasure of consuming instant noodles made by Burjo places already become an urban legend among the favorite hangout places for the Indonesian people looking for favorable street food and to also socialize with each other.

Other than Jakarta’s street food that we explained above, there are other street food in Jakarta which you need to taste when you stay in Jakarta, such as:

The local delicacy of street food available in Jakarta is a heavenly experienced that must be tasted. With so many people there then you can find every food that suitable to every person need, and you’ll be able to appreciate just how vastly varied is the food there and can become a culinary activity that yet to be explored.