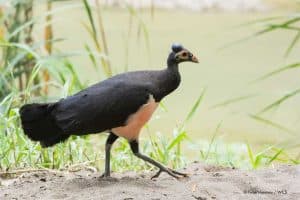 Indonesia is a country rich in biodiversity. One of the best known fauna in Indonesia is the Maleo bird. It looks like a chicken, but it is true that this animal is a kind of birds. Maleo is the only species in the world of the Genus Macrocephalon, and can only be found in the Indonesian state of Sulawesi.

Its name is Macrocephalon maleo, usually known as the Bird Maleo or Maleo Senkawor. Maleo bird is the original “mold” or also mentioned as endemic of the island of Sulawesi. However, Maleo could also be found in Maluku. Here is the facts of Maluku Maleo Bird.

Maleo does not incubate the eggs that have been hatched. After passing through the reproduction and hatching period, the maleo will bury its eggs in the sand that has geothermal natural heat. Maleo does not go through the incubation process because the size of the egg is large enough, even larger than the size of his own body. If estimated, one maleo egg is the same size as 5 chicken eggs. Because of the size of this egg, maleo until it can pass out when hatching.

2. The fetus of maleo needs long time to meet its mother

Maleo fetus must wait for approximately 80 days to be able to hatch and meet with its mother. The process is quite long. Not yet calculated the struggle out of the sand that heaped up. No wonder that maleo chicks are more often dead and over time the number is reduced. This is too bad. Maleo is one of the most beautiful birds owned by Indonesia.

Although maleo included on aves family (obviously have wings), It doesn’t make flying as their hobby. Unlike other birds, maleo is more often using their feet to walk. It makes them seem like chicken rather than a bird. So don’t be mistaken if you see this kind of animal.

The duration of the drain takes about 62-85 days. But once recorded there are also eggs that hatch less or even more than the time range. When the right time comes, the egg breaks and the boyo boy will come out. The newly hatched maleo boy has to go out on the ground himself without the help of the mother.

6. An endemic animal from Central Sulawesi

Not many animals are loyal to their partners, one as an exception is the maleo bird. All his life, maleo will only live together with one partner alias monogamy. This can be evidenced through the rare maleo-male daily activities, never even colonizing. Throughout his age, maleo birds prefer to co-exist with their spouses and keep each other’s guard over the group looking for protection.

8. A pair of maleo will cooperate together to keep their nest

Usually, the maleo flies to the nesting ground in pairs in the morning. Alternately, the pair will disassemble the ground, sand, and gravel, to form a large hole with a diameter of about half a meter. The female then will pause in the hole to lay eggs. While the males are scurrying around the hole by trying to poke their necks out, watch out for all the dangers. When the female came out, they again took turns closing the hole.

The size of male bird is just as big as an ordinary chicken, not worth the size of its egg. The size of maleo egg can reach 5 to 8 times the size of chicken eggs. Its diameter can reach 11 cm with weight up to 270 gram per grain. Because of the magnitude, a female maleo will do much struggle when they laying eggs. In fact, it is so heavy. That is why it often found a female male fall faint after laying their eggs.

10. Monitor lizards are the main predators of maleo birds

It has been known that this animal is the main predator for pets such as chickens, as well as maleo. Lizards are the killer enemy for maleo. Besides they prey on small maleo, they are also the main predators for maleo eggs. Because of their very sharp sense of smell so easily they find a maleo egg that has been buried in the ground though.

If it’s time to hatch, the the small will try to get out of the egg and sand pile alone. Instinctively, he will find a place to hide in the woods and find his own food. Although newly hatched, the small maleo has had fine hairs on his body and his wing feathers are already large like an adult bird. That is why the small maleo could fly while the size is so small.

Maleo bird is dominated by black, from its fur, horn / crest hard to the skin of his feet. Therefore, the Maleo bird is classified in the type of birds burned. Around her eyes are yellow, with brownish brown eyes, orange beak and down side feathers are pure white. Between male and female birds are similar, it’s just that female birds are smaller and darker.

13. Maleo is one of endangered animals in Indonesia

This Rrare endemic birds from Sulawesi and Buton Islands are included in the “Endangered” list by the IUCN Red List and listed in CITES Appendix 1 and protected by PP No. 7/1999. Of course, this bird should get serious attention. Do not let the Maleo bird really go extinct in the next few years. Pity our grandchildren who can’t enjoy the beauty of Maleo birds as one of the native endemic animals of Indonesia.

Maleo wildlife populations that are protected by their presence are threatened with extinction due to the continuous loss of habitat. In addition, the threat of extinction is also due to illegal logging and the opening of new land for resettlement without considering the functions of the surrounding area. In addition, the theft of Maleo birds by the local people, egg predation and maleo birds by predators such as lizards and snakes, habitat destruction due to encroachment, illegal logging, flood or forest and land fire, and the hunting of adult Maleo birds.

15. Although the status is endangered, there is not much conservation in Indonesia

To avoid undesirable events, Maleo birds must be conserved. Conservation of natural resources in Indonesia is one of the core parts of national development aimed at achieving sustainable development. One indicator of the success of conservation is the increase in population of 25 endangered species of priority in accordance with the IUCN Redlist of Threatened Species by 10 percent. Maleo bird is one of the priorities of population increase.

Those are the facts of Maleo Maluku Bird. As Indonesians, we should proud of the owning the-only-one special animal like Maleo. We should help to conserve it. Don’t continuously steal its eggs or hunt them masively. It would just send the name of Maleo into one of the extinct animals in Indonesia.