Indonesia is a very unique country. This country consists of several large sized islands and thousands small sized island. Each island in Indonesia has its own culture. There are so many cultures in Indonesia and people in Indonesia came from so many ethnics.

A. The Lives of People in Rural Areas in Indonesia 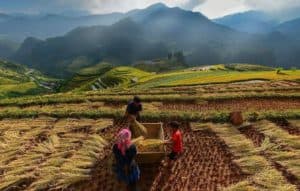 There are certain areas in Indonesia that are very remote and can’t be accessed easily. The geographical factor also plays main role in shaping the way of life of people who live in the rural areas of Indonesia. Besides work as farmer, some people who live in rural areas might also have several side jobs as well such as fisherman or breeders.

Most people who live in rural areas in Indonesia work as farmer. This is because the land in rural areas is still fertile and not being used for infrastructure such as office building, housing, or other public structures.

B. The Lives of People in Urban Areas in Indonesia 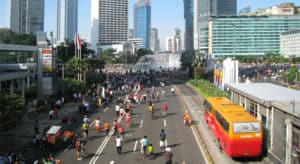 Besides rural areas, Indonesia also has urban areas as well. Before we get into the lives of people in urban areas in Indonesia, first you might need to know the definition of urban areas. Urban areas are usually related with cities.

According to Max Weber, cities are the urban areas that became the center of social changes. A city is a world capitalist system. The people who live in the city or urban areas are commonly known as urban community.

The sanitation aspects, especially about clean water, are not become a major concern for people who live in the city. According to studies that are conducted by WHO, the water system in cities of developing countries is not managed well and might contaminated by many factors. Therefore, the risk of bronchitis and emphysema disease that are caused by air pollution is quite high in the cities.

The rush and the activities of people who live and work in cities require fast and instant lifestyle. This condition is used by fast food companies. Therefore, the fast food restaurants grow rapidly in the urban areas.

Various types of fast food such as hamburger, pizza, French fries, and fried chicken usually came with very high calories level, low in fiber, and low in nutrients. That’s why nutritionists and health experts usually call this type of food as junk food.

These days, junk food became more popular among kids. Families that live in the cities usually have very busy activities and they don’t hesitate giving the junk food to their kids without paying attention to negative effects that might be caused by this type of food in long term. Fast food restaurants can be found easily in almost any parts of the city these days.

The lifestyle of people who live in the city and the influences of environment in developing countries have been associated with many essential causes of death besides cancer and cardiovascular diseases.

The rapid increase of people with diabetes might be caused by the combination of genetic factors and diet. Cardiac cirrhosis is usually caused by alcoholism. People who live in the city usually have unhealthy diet. They eat too much carbohydrate, especially sugar and fats.

Lifestyles That Can Only Be Found in Indonesia

One of the most interesting things about lifestyle in Indonesia is that people who live in this country have very high creativity in modifying almost anything. People who live in Indonesia can assemble or modify anything to meet their needs. For example, in some cities in Indonesia you will find a very unique vehicle called “Betor”. In local language, Betor is a word that is a combination between two words, “Becak” and “Motor”. Becak is one of the traditional vehicles that you can find in Indonesia. However, these days people are no longer using this vehicle since there is regulation that forbids it.

Bentor is the type of Indonesian Traditional Transportation that combines Becak and motorcycle. You can find this type of vehicle in almost any big cities in Indonesia. Motorcycle modification is also a very popular thing in Indonesia, especially among teenagers. Indonesian people are also known for their creativity in modifying various types of foods as well. This is considered as one of the most important parts of lifestyle in Indonesia.

However, overall, people in Indonesia tend to have high tolerance and excellent mutual cooperation. The members of society will help each other without discriminating race, religion, ethnicity, and other aspects of life.

Indonesian People are also known for their hospitality as well. Hospitality plays a very important role in lifestyle of people who live in Indonesia. In Indonesia, if people meet with their neighbors on the street, they will smile and greet them. This is considered as a very common thing in Indonesia. If you take a bus and you sit beside a stranger, you might have a chance to involve in a very friendly conversation with that person.

When people eat their foods together, they will talk to each other about almost anything. This condition will break the ice and makes the atmosphere becomes more friendly and warm. Sharing foods with your family, friends, or even colleagues is considered as a common thing in Indonesia. Moreover, there are so many choices of foods that you can find in Indonesia since each area of this country has its own traditional foods.

Talking about food, Indonesian people also have a quite unique lifestyle. If you visit Indonesia, you might hear expression that said “If I don’t eat rice, then it’s not eating” in many parts of this country. Most people in Indonesia consider rice as their main food. So even though they’ve already eat noodles or bread, they will still eat rice since they feel that they are not really eating if they haven’t eat rice.

Other bad thing that became lifestyle of people who live in Indonesia is curiosity. Most people in Indonesia don’t know how to keep their own business and always try to find out about other people’s affairs. In some levels, this is acceptable. However, there are some cases that make curiosity became quite annoying because it can harm other people’s privacy.

8 Most Largest Ethnic Groups in Indonesia