Spending some holidays in the island of Bali is one of many goals that everyone wants to reach for. Some people even start to save their money to be able to enjoy the paradise island, with the smallest cost possible. Of course, the places that always being hunted are the famous ones like beaches, shopping center, etc.

But, if you want to have different journey in Bali, you can switch from hunting the famous locations to cultural places that exist in Bali. There are so many, some even hidden. Mostly they are in form of temples which spread across the island. But beside the temples themself, there are some other places that can be interesting for you to visit. All included in our cultureal tourism in Bali below: 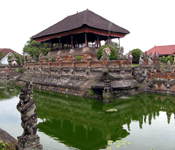 The first location that built as one cultural spot is Bale Kambang. In the East Java province, you can find the other place called Bale Kambang beach, which doesn’t have no relation with this place even though the name is perfectly the same.

Inside the area of Kertha Gosa, you’ll find one temple located in the center of a pool called Bale Kambang. The thing to see in there are the relics that can be seen on the top of the inner temple. There are three of them, each has different story. 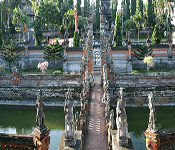 This is the area where the first location on above located. Kertha Gosa is one cultural tourism attraction for the local and foreigners who interested to knowing the Balinese culture. Built in Klungkung Dynasty on 1686, the area still looks great today.

You must use the clothing called Sarung or Selendang before entering the place. Also you should respect the rules and the traditions that still exist in the area. Inside, there are so many architectures that are interesting to see and also “captured” by your camera. 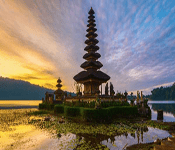 Next location is Bedugul. For you who don’t know, Bedugul is one famous area, that exists with its famous attraction, the Bratan Lake. So, it’s perfect for the people who want to seek relaxation and feel the peace in Bali island.

Aside from that, you can also find that there’s one great mosque called Al Hidaya Mosque. This can be a symbol of harmony, because even thoguh there are so many temples that surround it, the people either muslim of hindu can show respect to each other still. 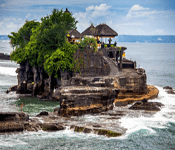 Tanah Lot is also one of the famous locations that one should visit during holiday in Bali. At the gate, you’ll be spoiled with the additional restaurant and also souvenir shops that are so many in the area. So, maybe you can look for them upon entering the place.

But, so many peopel come here not for the shops, but rather to visit the well known Temple, that can be exclusively open to people in some occasions. People can enter the temple once the waves .are lower, and safe enough for people to cross. 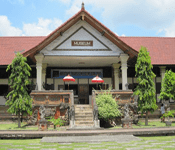 This location is also perfect or suitable for the people who want to seek peace atmosphere in crowded island Bali. The musem is actually the school building that has the thick nuance of Colonial Era on it. But even though it has such a very long age, it still well maintained.

Inside the museum, you can find so many things that has relation or relevance with the great war of Puputan. Beside those items, you can also find the Balinese products. The museum itself was inaugurated along with the monument of Puputan. 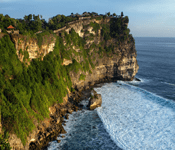 The next one is also a place with the form of a temple, Luhur Uluwatu Temple. Just like the temple in the area of Tanah Lot, there are many people who would like to visit the temple of Luhur Uluwatu in their spare time.

This temples is located near the rocks, just few meters from the beach lips. If you interested, you can come to the temple which in the area of Pecatu Village of Kuta Bali. The location of this temples is pretty popular because of the surfers who visited this place before. 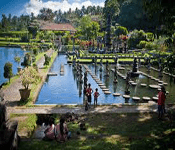 In the area of Karangasem, area with tons of good attractions in Bali island, there’s one attraction in there that you can not missed, the Tirta Gangga Castle. This is the heritage of the Karangsem Kingdom in the old glory days, and now becoming one of the favorable spots in Bali.

Beside coming here to study about the history of Karangasem Kingdom itself, visitors also have different purpose like seeing the mejstic fountains and also pool labyrinth that exists in the ara of Tirta Gangga Castle. 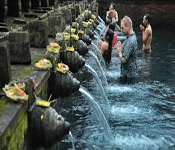 Tirta Empul is a temple that located in Tampaksiring area of Gianyar Bali. Tirta Empul is considered to be the Hindu temple of all temples in Bali. In this temple, there’s a special water that people refer to as Holy Water.

This Holy Water believed to be a cure to cleanse the Hindu people from evil. That’s why during special days, you can some people gathering around the cleanse themself with the water. Also there’s a villa in there which used a resting spot for the visitors, the wealthy ones. 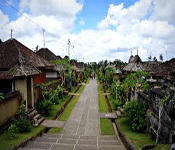 Aside from the temples and museum, in Bali there are some villages that can be included as cultural tourism spots. One of those examples is the Panglipuran Village. The name Panglipuran means Entertainer, or Penghibur in Indonesian.

Why the village was named with that name? Because most of the people who live here were entertainers for the Balinese King. Even until now, you can see the beautiful traditional Balinese architeture in there still. 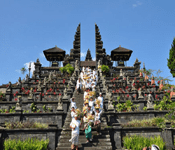 This one is like the center of all temples in Bali. In the complex, there are some temples lingering the area. One of them is Penataran Agung temple, which is the center temple of Besakih Temple Complex. That’s the biggest one. 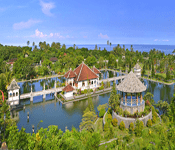 Next location, which is also a very history rich place is Sukasada Waterpark.Then,the place was used to be the bathing place for King, and the switched to be the resting place for the delegations from Karangasem Kingdom.

Now, it becomes one favorable place because of its look that is very unfamiliar and amazing for some reasons. Visitors can see how beautiful the architecture is, the Europeancombined with the building ruins that very contrast. 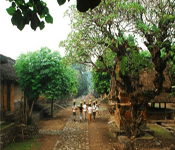 Next village beside the Penglipuran village is this Tenganan Village. This village is actually one of the Bali Aga villages. Bali Aga is like the ancient Bali community that still live until now, at least some of them. Tenganan Village was built even before Majapahit Migration on 15th century.

The people in there still very traditional, which is very good for the people who want to learn about Balinese culture, or ancient heritages. Villagers still use Gringsing Cloth, which is belived to be evil repeller. 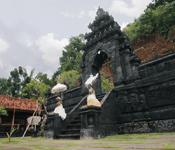 And then, for the final place on this list, there’s Dasa Temple. Located in the East Side of Bali, this temple has so many benefits for the tourists who love quietness. The place it self is not so crowded with people, you can even hear the sound of waves near it.

Although the temple doesn’t have anything to provide for the tourists except maginficent view and other traditional restaurans near the location, many people still refer this place to be a suitable spot to release stress.

There are 13 places that already mentioned on the information above. If you want to dig more deeper of cultural journey in Bali island, here we provide to you some other spots like village, temples, and statues as choices of cultural tourism in Bali.

So that’s out total 17 cultural tourism in Bali that you could try. This can be a great options for the tourists who considered themself as backpackers. Why? Because the costs to visit them and actually entering the places are considered really low, and yet, it’ll be a great experience to find and explore the unusual spots.

Are you one of them who want to try to do the journey of cultural tourism in Bali? If so, maybe you can prepare your stuff then, including the budget which isnot very high to visit those beautiful yet historical places that exist in Bali island.