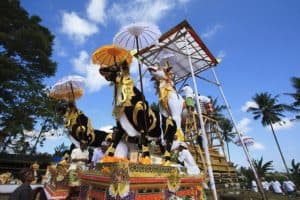 Ngaben ceremony or also often called Cremation Ceremony is an important ritual performed by Balinese Hindu in Indonesia to send the deceased to the next life.  This ceremony is very well known not only in Indonesia but also worldwide.

It always attracts tourists from all over the worlds because this is done uniquely, vibrantly, artistically, and is the one and only in the world.

Tourists that have seen this ceremony feel so honored that they be able to witness one of the most unique tradition in Indonesia.

If you have not had the opportunity to attend this ceremony yet, it’s still okay because in this article I will explain all the things related to Ngaben includes the meaning, history, and procession of Ngaben in Bali.

The word “Ngaben” means turn to ash and initially is a term used in public society in Balinese social culture.
The ceremony is performed in a proper day after consulting a specialist on ceremony days. On the day of the ceremony, the body of the deceased will be placed like when you were sleeping. While, the family will shed no tears thus they believe  is only for temporarily absent then it will reincarnate in the future.

Ngaben in Bali is an important ceremony for Balinese Hindu. Thus, this is a realization of respect and love for the deceased one of Hinduism in Bali, and also related to the family social status of the deceased one.

As already mentioned above, Ngaben is performed by Hindu people in Bali. Initially, this sacred ceremony is started when Bharatayuddha (the descendants of emperor Bharata) in India around 400 B.C. They believe that this cremation ceremony will bring back the deceased body into the natural foundation of the Body (water, heat, wind, earth, and ether,).

Hindu people also believe that this cremation ceremony will also free the soul from their bad deeds while they are still alive and it will accompany them to heaven and reincarnate as a better person. Then, after Hinduism came to Bali around 8th century, this ceremony was also introduced there and is inherited form generation to generation until right now.  In this modern era, this holy ceremony is still performed and become a unique tradition that can not be separated away from Balinese Hindu.

The Procession of Ngaben

Ngaben in Bali is a series of procession that will take time and effort for the preparations until the final procession. In general, there are three main processes in Ngaben, they are:

For further explanation, I will explain all of these three processes in detail below.

The procession of ngaben is begun by placing the death body in an individual coffin which typically buried at Pura Dale or also referred as “the temple of the death”. Actually, Ngaben may not be performed immediately after a person passed away, it may be performed any time depends on the financial condition of the family.

The noble family usually performed Ngaben individually for the deceased within three days, meanwhile people from lower society class will bury the deceased first which then will be cremated with the village’s other dead in a mass ceremony.

The ceremony will be performed on a good day according to Balinese calendar and after an agreement between the families with a priest. Preparation is made in advance and during this period the family will make a sarcophagus resembling a buffalo (Lembu) and a kind of great tower with multi tier roofs decorated with colorful carved papers, woods, and bamboos.

Actually, the sarcophagus also may be formed as the other animal such as Singa (Lion) or Naga (Dragon), it is according to their social status. For example the royal family usually uses Naga as sarcophagus form. The sacrophagus is a symbol as the transporter of the deceased person to Nirvana or heaven.

At the day of Ngaben, the ceremony is started from early morning and we could hear the sound of vigorous Balinese orchestra which could take the family away from sorrow. The coffin will be placed inside Lembu and paraded to the graveyard and the cremation process will be held there.

The vibrant parade consists of the Balinese orchestra, offerings carriers, the blacksmiths, and the relatives of the family. This is why Ngaben always attracts tourist to come and observing the ceremony. In every intersection, the Bade and Lembu will be spun from east to south three times while the others sing a prayer with a hope that the soul of the deceased could get a good place and could reincarnate as a better person in the future.

After arrived at the graveyard, the deceased body that is inside Lembu will be burnt and become the climax of a Ngaben ceremony. In Hinduism, people believe that Brahma is the God of creator as well as the God of fire, so fire is a tool to purifying the soul therefore the deceased one will be back to their creator.

The burning procession is initiated by a priest and all of the family member will gather around to place offerings around the sacrophagus and start to pray for the soul. During the cremation, we can feel a solemn atmosphere and sometimes it is a touching moment when we can see the family member shedding their tears for their beloved ones.

Generally, the cremation process will take time around one hour until the Lembu is completely burnt into ashes. After that, the family member will gather the ashes in a white and yellow cloth. The final ceremony which is the final purification is performed twelve days after the cremation.

During this ceremony, the ashes will be washed away into the sea. If the sea is too far, the ashes will be taken to the nearest river which will eventually carry it to the sea. Hindu people believe that sea is the symbol of God’s place gate. The other meaning of sea is that the human body consists of five elements which are water, heat, wind, earth, and ether, and performing this procession will bring the deceased body back to the universe. This is believed as a tool for the soul to go to a higher level which from there the soul can follow the final stage of reincarnation.

In Hinduism, people believe that the soul will return back as a reincarnation of a new family member such as the first baby that born after this final ritual.

From the explanation above, we can learn that Ngaben in Bali ceremony is a way for Balinese to respect their beloved ones and shows us how important it is that mortality is not the end of life but it is the beginning of a new better life. A separation with our dearest family is not always a sorrow, we learn that we can see it as a new beginning and we can celebrate it joyfully with our relatives.  The ceremony that is filled with prayer, sincerity, and joy will accompany the deceased until they arrive in their last rest place.