13 Examples of Ecotourism in Indonesia

This ecotourism presents many things about coffee growing and famous in Malang regency. Tourists can recognize, feel and even learn directly about Malang coffee, especially in District Dampit. Even this ecotourism has just opened in January 2018.

They can learn how to start planting, equipment until the processing aspect to be a delicious coffee dish because it has a different taste. The lovers of coffee archipelago will certainly be satisfied if a visit to this new tourist destination in Malang regency. Tourists who come to Malang Regency will feel complete because they will be able to enjoy a row of beautiful beaches, religious, cultural, and agricultural tourism such as Amadanom Ecotourism.

Pura Ulun Danu is the largest pura (temple) in Bali after Besakih Temple. The name of this temple refers to its location which stands on the shores of Lake Beratan. Location of this temple is quite special because it is in the highlands Bedugul, which is about 1,239 meters above sea level (asl). Such conditions make the temple environment is quite cool, with air temperature between 18-22 degrees Celsius. Ulun Danu temple which stands on Lake Bratan is used as a place of worship in particular a tribute to the goddess of water, Dewi Danu. Lake Bratan is known as the main source of irrigation in central Bali.

Ulun Danu temple made ecotourism because in addition to enjoying the beauty of nature, you can enjoy various tourist attractions, including parasailing or speed boat, water duck bike, and water ball. Parasailing in Bedugul certainly different with parasailing at Tanjung Benoa Beach, Nusa Dua. 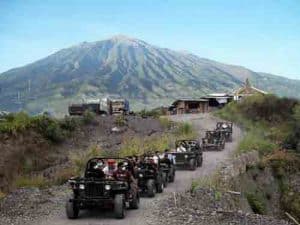 Merapi Lava Tour is an adventure tour in Yogyakarta located in Kaliurang, right at the foot of Mount Merapi. Jeep tour with crossing-off roads will explore the area around the cool lava flows and hot ash eruption of Mount Merapi during the eruption. Be careful of rocky road surface and sandy eruption of Mount Merapi. You need to use glasses and masks because these Jeep Cars will race very fast. You need to hold on tight so you will not be thrown off the jeep. It may scare you. But this will be very exciting, enjoying a fun and exciting adrenaline rush at the same time.

Along the road will see the village landscape destroyed and abandoned by its owners due to eruption of Mount Merapi in 2010. Jeep drivers provide masks for passengers to filter dust and Merapi Lava Tour with experienced chauffeurs across the off road to Merapi. 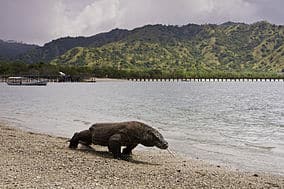 With a total area of 1,817 sq km, Komodo National Park has a myriad of popular tourist destinations for tourists to visit. Not only domestic tourists, there are but also many foreign tourists who admire the beauty of this place. Komodo National Park consists of many islands including three large islands such as Rinca Island, Komodo Island and Padar Island. 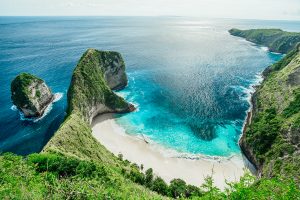 The island of 200 kilometers wide is a hope for the conservation of starlings Bali, one of the rare fauna of Bali. In the 2006-2010 timeframe, breeding managed by the Friend of National Park Foundation (FNPF) managed to incubate 58 Balinese starlings from an initial population of 64 birds released into the wild.

Nature and community in Nusa Penida Island are relatively more conducive to receiving Bali Starling conservation program. The natural vegetation of the forests of Nusa Penida is relatively appropriate as the habitat of Bali’s starlings. In addition to Bali’s starling captivity, you can also visit points of interest on the island such as Atuh beach, Broken Bay, Angel’s Billabong, Tembeling Beach and Waterfalls, and many more.

The appointment of Gunung Pancar Nature Park as one of the ecotourism of Indonesia aims to protect the types of flora and fauna, whether or not protected by the law, and protect and maintain its ecosystem in order to be utilized for the benefit of science, research, education, tourism, and other activities that support cultivation.

The area of Nature Park Gunung Pancar has interesting attractions to visit, including hot water baths, sacred tombs, and enjoy the performances of traditional arts areas. Tourism activities that can be done in Padang Mountain Nature Park is the activities of hiking, camping, cycling, tennis, swimming in hot springs, cross country and others. 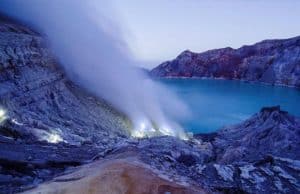 Nature Reserve / Natural Crater Park Ijen in Alas Purwo National Park has a wealth of diversity and appeal so it can be a major capital in the development of ecotourism with objects that can be marketed to consumers both at home and abroad.

Ijen Crater is a crater or lake located at the top of Mount Ijen. Banyuwangi Tourism Ijen Crater is located at an altitude of 2444 meters above sea level. This crater is famous because of the phenomenon of blue fire or blue fire that appears at night, exactly in the morning around two o’clock to four o’clock. Blue fire phenomenon is said to exist only in Ijen Crater. No wonder, not only the traveler who visited there, but also the geologists and researchers, many who visit it. At any time, many local and international tourists are curious about this blue fire phenomenon. 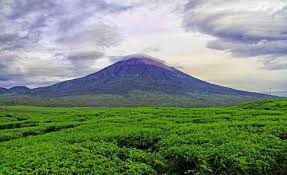 Kayu Aro Tea Plantation in Jambi, precisely in the area of Mount Kerinci is the oldest tea plantation in Indonesia since the Dutch colonial period in 1925. The location is in the area of Mount Kerinci, precisely in Sungai Penuh, Kerinci regency, Jambi Province. More astonishingly, this tea garden is the world’s second largest tea garden after the Darjeeling tea plantation in India. The area is about 2,500 hectares and is located at an altitude of 1600 mdpl.

There, you will be presented with views of green tea gardens, fresh air, and Mount Kerinci from a short distance. Visitors who come will be welcomed by the workers in the garden and allowed to pick their own tea. To arrive at the tea garden location, it takes about 8-10 hours to arrive at Kayu Aro. It is because the location is in Jambi and directly adjacent to West Sumatra. 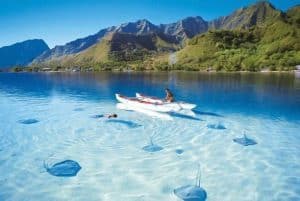 Rubiah Island is one of the islands located in Nangroe Aceh Darussalam. This island is part of the city of Sabang, precisely in the northwest of Weh Island. This 26 hectare island offers the beauty of underwater paradise and marvelous marine tourism. In fact the island is nicknamed as a marine park paradise. This is because the island is like an aquarium that contains a variety of decorations in it.

This island is perfect for tourists who have a hobby of snorkeling, diving or wandering by glass boat (glass bottom boat) because on this island there are various types of coral reefs are very colorful and various shapes. Surely the corals that form a very interesting cluster will be very spoil the eyes of lovers of marine tourism.

Penglipuran Tourism Village is a traditional village of Bali in Kubu Village, Bangli District, Bangli Regency. The most strikingly distinctive feature of this village is the same traditional architecture and stands very neatly. Since the village of Penglipuran was seen in one TV station Indonesia, which is used as a place shooting FTV (television film), the interest of domestic tourists to visit the village Penglipuran Bali higher.

In this village you will see the shape of each resident’s house almost the same. The similarity of each house is seen in the gate of the house, the roof of the house and the walls of the house using bamboo, the width of the gate that only fit for one adult. In Balinese society this type of door is called angkul-angkul. In addition, the division of each layout of the house is also the same, as the bedroom and kitchen. 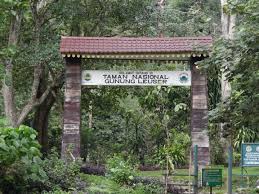 When crossing the incredible landscape, enthusiastic adventurers will not be disappointed. For that place is used as ecotourism in Indonesia. Almost the entire area is covered with dense forest with several rivers and waterfalls. This area is defined by UNESCO as a biosphere reserve and some time ago recently visited by Hollywood actor Leonardo DiCaprio.

12. The combination between Pindul Cave and Oyo River 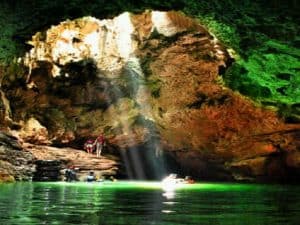 This place is located in Gunun Kidul, Yogyakarta. The combination of Pinndul Cave and Oyo River is very interesting to visit. No wonder the local government started to make this place into ecotourism. By boarding a raft made of large truck tires, you can enjoy the beauty of stalagmites and stalagtites that adorn the walls of Pindul Cave. For approximately 45 minutes, tourists are invited to enjoy the beauty of the underground river along the 350 meters.

After having been satisfied to admire the beauty of Pindul Cave, tourists can adrenaline with a little rush to the river tubing on the Oyo River. This one kilometer river has several stream meetings which is certainly a challenge for tourists, even the rubber tires can be overturned due to the rapid flow of the river. Don’t worry since there are guides who accompany tourists along the Oyo River. Tourists can also enjoy the beauty of two waterfalls commonly referred to as surrounding residents as the Bridal Waterfall. 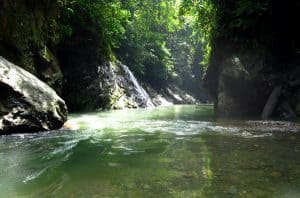 Tangkahan commonly called The Hidden Paradise in North Sumatra. Most Indonesian people do not know much and Tangkahan is long known by foreign tourists, especially for those who are outside of Sumatra Island. There are beautiful places that can be used as a tourist destination for those who want to enjoy the atmosphere of the forest and nature.

Tangkahan ecotourism is actually located in Gunung Leuser National Park located in Langkat Regency. Tangkahan began to be visited because of its amazing natural scenery and the freshness of the air served to make anybody linger here. If you are not satisfied with just enjoy the natural scenery in Tangkahan, many activities you can do such as rafting on the Alas River, visiting the conservation of endangered Sumatran orangutans.

Those are the examples of ecotourism in Indonesia. Once in your life, you need to visit some of them. It would give much experience for your life.