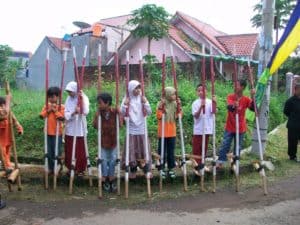 Indonesia is a country with thousands of cultural diversity. In addition to dance, music, and singing, Indonesia also has many traditional games.

This game is usually played by children. Although not infrequently some adults also play this game.

Unfortunately, the existence of this traditional game has started many abandoned by children in Indonesia.

The game is becoming less popular with games apps on Smartphones, Play Station, or even Online gaming. Here are the examples of traditional games in Indonesia. 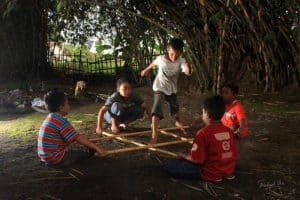 Rangku Alu game is a game that comes from Nusa Tenggara Timur, this game is a favorite in all ages. This game is usually played when the harvest arrives. To play it you only need 4 bamboo sticks. There are two groups to play this, each group of four.

One group in charge of guarding and one more group playing. The guard group is in charge of playing bamboo which in the bumps to form a square accompanied by singing. The playing group must jump up and down to avoid being squeezed between bamboos. If one of the players’ leg is pinched, then they will change the task. 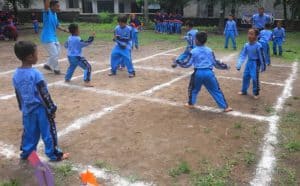 This game is certainly a popular game in Indonesia, even until now this traditional game used as a game for the match. This game requires strategy and speed in, through the enemy and capture the enemy, this game is also a most favorite game for boys and girls.

In this game, there are two groups, each group of 4-5 people. There are groups in charge of guarding and some are playing. There are two teams named guard players and active players. The guarding group will dispel the opponent’s group rate so as not to escape, and if touched it will change the task.

This game requires a large enough field. You should make it like a badminton court, guard player are on the horizontal line. The guard player in the front position can be traced to the vertical line in the middle of the field. The Players team will go back and forth, and keep away from the guard teams (guard teams can’t move out from the line). Then they will get points if they could pass until the backward line. The winner is a group that has many points. 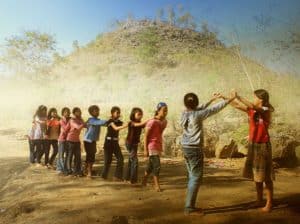 This game called ular naga (dragon snake) because this game would shape the player make a long line like a dragon snake. This game can be played at least by 7 children, 2 people served as guard and the rest will walk past the guard. When starting the game it is usually at random first with hompimpa (one of the ways to determine who was chosen to play first) to determine who 2 people as a guard.

The rest of the players lined up with each other’s shoulders and walked past the two guards. The game of a dragon begins with a song of regional or other songs of choice. When the song stops, the guard will catch one of the guys and the one caught must get out of the game. 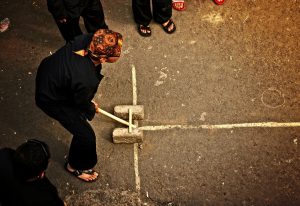 The gatrik is a traditional game that uses two thin bamboo stems 30 cm long and 15 cm long. It is also used 2 bricks to support the game. The gatrik is played in an open field and a flat place, this serves to make it easier to catch bamboo.

The game is played by two groups, each group of 3-4 people. This will require a large area. Each group has a task, there is a group in charge of throwing bamboo stems and other groups catch the bamboo stems. If a bamboo rod is caught eating will swap roles. The winning group is a group with many points.

Gasing or gangsing is a traditional long-standing game in Indonesia, this game being one of the favorite games for boys, as it pits strength and endurance. Gasing is usually made of small berembung fruit or coconut. Fruit that is not too oval and round until this fruit can be rotated. These fruits are numerous along the shores, as they can’t last long, eating an idea to make a replica of this fruit made from tree or bamboo trunks.

This game uses a tool called gasing. Usually, it is played on a flat place. You should make a circle that will later be topped in the circle. The gasing which does not circle out and spin the longest is the winner. This game can be played by two or more. 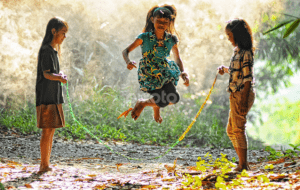 Lompat Tali is including traditional games made of rubber bands. The rubber bands are combined and arranged long. This game is often played by girls. The rubber band strap that is used in this game is an immature rubber band.
The game is usually played by 3 or more people. There are 2 people as a rope holder and the other is in charge of jumping rubber. The height of the rubber starts from the ankle until it reaches the head and even the hand is held up.

The height of the rope is up to the chest. It requires participants to jump without touching the rubber / strap. If the player touch the rubber or be entangled in rubber, then the players fail to win. Then the position will change between the payer and the rope holder. If all players have made it through the jump challenge with the final height, then the game will be repeated from the beginning, and so on.

This one game has its own charm of Congklak board form available. In addition, this game will not make you sweat because you play with sitting and relaxing. The number of holes contained in the Congklak board amounted to 16 holes, divided into seven small holes and two large holes, the hole being the destination with each player having one hole.

This game is played by two players. Typically, players use board tools and Congklak seeds. There are 49 congklak seeds are divided into 14 small holes. Each hole contains 7 cOngklak seeds. Then, choose a turn. The first player, handing out the Congklak seeds in his area, choose one of the holes to distribute his Congklak seeds to each small hole, and one big hole that becomes yours, or your seed savings. Share evenly. Each pass through the holes, fill with 1 congklak seeds Do it continuously until the seeds Congklak out, if it is finished then turn alternately play. 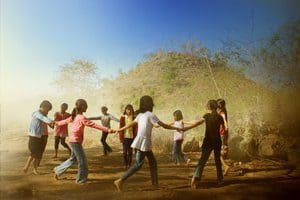 The game begins with hompimpa (one of the ways to determine who was chosen to play first). The winning children will then form a small circle while singing a song. The loser will stand in the middle of a circle. Children who are in the middle of the circle and then can answer the song with the words Jamur Montor, Jamur Patung, Jamur Putri Malu, and many others.

When the child answers the Jamur patung (statue) that means all children should be styled like a statue. They should not move, smile, speak, and being tempted or talked to. If there is a child who laughs, smiles or speaks, then that child should replace the child who lost earlier.

Each player must jump through each box by using 1 foot and should not exceed or out of the box line.

If any player is dropped or violated, then the stone should be placed in the last box as a sign to start the next turn. Have you experienced to play it when you were a kid?

Boi-boian is a traditional game that comes from Java. This game is usually played by boys and girls. Boi-boian is almost the same as a bowling game.

You have to throw the ball to the target. To make a ball, you can use rolled paper then tied up with a rubber band or we can use a ball.

After that, we collect pieces of stone or tile that will be arranged into a pyramid. The game consists of two groups.

One group is in charge of throwing a ball while the other is arranging a collection of stones into a pyramid or arranged upward. The more members who participate, the more exciting the game is. This game requires speed in arranging rock gatherings and cooperation of members is also needed.

Those are the examples of traditional games in Indonesia. Almost of them usually played in a group. The games are also need much movements for children that will make them healthy. Compared to the video game or play station, those games are more incredibly exciting.

10 Best Activities in Bandung You Must Try