10 Extreme Foods in Indonesia You Should know 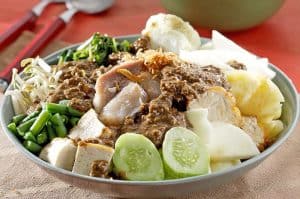 Indonesia consists of thousand archipelagos that in every tribe, they have their own culture. That includes clothing, houses, languages, even food. Indonesian food is usually known as spicy with rich seasoning that makes it taste very rich.

Indonesian food is mostly known as healthy food as it includes a lot of vegetables and fruit in the production process. But do you know that there are several extreme foods that you can find in Indonesia that might sound weird. Here are the lists:

Gulai is kind of food that consist of traditional seasoning from Indonesia such as ginger and turmeric that’s boiled with coconut milk. It has usually yellow color and it has rich taste thanks to its seasoning ingredient. Gulai usually uses meat, beef, chicken or some vegetables like jack fruit or cassava leaves as its main ingredient.

But in Riau, people has made Gulai using snail as its main ingredient. The main ingredient might be slimy and stink, but it’s produced by certain method that’ll get rid of that part. You can try this Gulai if you’re bored with Gulai kambing (mutton Gulai) atau Gulai sapi (beef Gulai)

You probably wonder what is this food. This is cereal that’s original from Indonesia. It’s made from fragmentation of Buffalo’s milk then it’s added by lemon to give the porridge a fresh odor.

Rujak is a local food from East Java, specifically Surabaya. It’s basically a salad but it’s added with ketchup, fragmented shrimp and fish called Petis, and peanuts sauce. It has rich taste since it consists of various ingredients of vegetable and rice.

But what makes Rujak Cingur is an extreme food is the Cingur itself. Do you know what it is? It is a cow’s or buffalo’s tongue and nose. Can you imagine that? It might be a little gross but it tastes very good especially when it’s blend with tofu and tempe and all the seasoning in your mouth. Whenever you visit East Java, don’t forget to taste Rujak Cingur.

Rujak is usually served as main plat in lunch, but if you want to know more about what Indonesian people eat in lunch, go check 17 Typical Lunch in Indonesia That Have Fresh Taste!

If you visit Yogyakarta, you probably know its infamous local food called Gudeg, a traditional food that’s made from jack fruit. But it’s not the only thing that you could find in Yogyakarta. There’s an extreme food that you can try in this special region

In Gunung Kidul region, people fry grasshopper and eat them as snack. They also have industry that focuses to produce fried grasshopper. They take this opportunity because grasshopper is found in their field eating their plants. So farmer captures most of them and fry them because they don’t know what to do with it.

Some people say that it tastes like fried chicken. However, it is believe that grasshopper has rich amount of protein that could be beneficial to your body. You can get more information about food in Yogyakarta here 15 Unique Foods Must Try in Yogyakarta during Ramadhan

But don’t worry this snack taste sweet because it uses many sugar as it’s topping, some also uses chilly and salt to make the taste different. Overall the taste is not bad at all. You should try this one. You want more Indonesian snack? Check this article The List of Must Buy Snacks in Indonesia

Laron is unique animal that’s usually found during rainy season in Indonesia. It’s kind of insect that can fly but they’re mostly and underground animal. That’s why they’re vulnerable when they’re surrounded by light. But they have to flee from the underground when rainy season after their home is flooded with water from the rain.

People use this opportunity to capture them and fry them to make a local chip called rempeyek. It’s usually made of specific flour with some ordinary seasoning such as onion and salt with peanuts. But when rainy season comes, people make rempeyek with Laron as subtitute for peanuts. What an extreme snack.

Eating a mouse? Is it good? Isn’t this animal considered as very dirty animal? But yet you can find it in Manado as it’s produced there. But Manado’s people don’t use a mouse that’s found in sewer that’s completely contaminated by dangerous material, they use mouse from farm and forest that they believe is healthy and fresh.

It’s roasted with local seasoning that makes it tastes like fried chicken.

After talking about extreme foods from West Indonesia, it’s now the time to mention the beloved province from East, Papua. They have one extreme food that’s usually served as side dishes in the main course.

It’s processed Sago caterpillar. Yes, you hear it right. Papuans often harvest Sago for their primary food that can be got from Sago Tree. While they harvest the Sago, they usually find Sago Caterpillar. Sometimes they keep it to be fried or roasted, but sometimes they swallow it directly from the wood. Interesting right?

The caterpillar is believed to have rich amount of vitamin that the Papuan uses it as side dishes. It’s usually served with some salad and Sago.

This might be looks very weird, but it definitely exists in Indonesia. Who would have thought of such extreme beverage that made from a living animal. Juice is usually made from fruits or vegetables. But, not this juice. It’s made from earthworm instead.

But it’s not a direct living worm to be crushed in the juice machine. The worm has been trough some process that it’s finally becomes powder. Then people can blend it with water and add some ice to make it fresh. It is believed that this beverage contains high protein that comes from earthworm.

This Balinese extreme food is made from pork and some vegetables. Interestingly, this food is not to eat. It is used by local people to give offering to the God in some particular event. But, as the time advanced, some Balinese restaurant serve this food in a modern way that could attract tourist to try it.

What makes this food extreme is not its pork, but the food also uses the blood of pork. Interesting, right? But they probably get rid of it when it’s served in a restaurant. It’s also cooked food so you don’t have to worry if the pork is raw or not. For more interesting food fact in Bali, check out this article 13 Foods eaten in Bali You Should Try

This food is originated from Banjar, Borneo. It is considered as extreme food in Indonesia because this food could be consumed after several weeks it’s cooked. Usually, the cooked food will be stale after three to four days, won’t it? But this food is served weeks after they produce it.

It’s fermented fish using salt water and some vinegar. It’s raw food like Sushi, but it’s more extreme because it’s fermented and it uses fish as its main ingredient. After a week, the fish is ready to be consumed. Do you dare to try it?

Those are some very extreme foods that you can find in Indonesia. See, Indonesia doesn’t not only consist of rich seasoning and well-cooked plat, but it also has some weird but interesting food if you dare to try it.

Recommended Places to Visit Around Bromo