Home » Food and Beverage » 17 Typical Lunch in Indonesia That Have Fresh Taste!

17 Typical Lunch in Indonesia That Have Fresh Taste!

In Indonesia, there some severalchoice available for you to choose. They are really delicious, and also start to spolling our money out of wallet because the foods will make us want to try more and more. Some of them also the foods that you can’t find anywhere else beside Indonesia.

Also, those traditional foods can also be  used for breakfast, lunch, and also dinner. But, you should pick the right food to each time of meal to get the best taste possible. And now, we’re gonna tell you about the list of foods that also can be typical lunch in Indonesia. There are seventeen in total, starting from the first one. 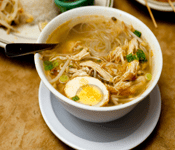 The first one, also as the most refreshing meal is Soto. Even though it’s served as a hot one, but, the taste of it will blown you away. In a bowl of Soto, you can find of course the yellow soup, which has salty taste, then rice, some chicken meats on top, vermicelli, and also other spices.

Usually you can easily get one bowl of Soto buy buying it at the vendor that sold it just right beside of the main road, You can easily see the “Soto” sign on the stalls. There you can get one Soto with only some thousand rupiahs. 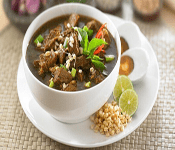 Aside from Soto, there’s also one food called as Rawon. Has the same range price with the Soto above, Rawon also has a very delicious taste. Of course, if you looking for a good option for lunch, you can’t skip this one.

With the soup that has the black colour and tasted a little salty, you can get one bowl of Rawon filled with so many things like the beef, and rice. Usually you can get it so easily from the street vendors. It’s hard to miss it. 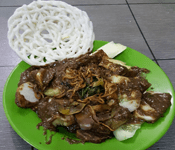 Then, in the third place, we put the Rujak Cingur on the list. In Indonesia, you can find different Rujaks, and we will go from this one. Rujak Cingur is the combination of a cingur, one of the traditional herbs commonly found in tropical area like Indonesia, with the peanut sauce.

Usually the peanut sauce will added again with some chillis, to make the flavor more stronger and much refreshing. Really good for lucnh though, especially to make your tired eyes t open again. With a portion of Rujak Cingur, you’ll be ready for the next work. 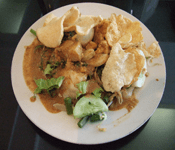 Almost the same as the Rujak Cingur above, Gado-gado is also using the peanut sauce as the additonal topping. But for this one, they don’t add some chillis with it, because the spicyness of the chilli can make the sweet taste gone.

With such a sweet sauce, Gado-gado also filled with so many good vegetables. They are can give a lot of benefits to our health. Of course, just one portion or one plate of Gado-gado would be enough to eat for the lunch. 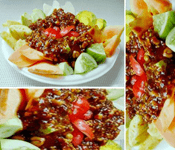 Another form of a Rujak. Basically, all the rujak use the same sauce, the spicy peanut sauce. If the Rujak Cingur use a cingur aside from the vegetables, in this Rujak Buah, you can find so many kind of fruit inside.

Say it, mango, cucumber, pinneaple, and other fruits can be found within. You can pick your favorite fruit though, buy ordering the just the same fruit. But of course, the variety of the food will be gone, replaces by one fruit. This is the thing that you really want to eat during hot day. 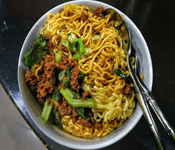 The next thing is, another form of noodle, combined with many good things called Chicken Noodle. If you happen to know bout some chicken noddle that came from European countries, then you shiuld try this one because they are really different.

The noodle that used is basically just the same noodle as usual. It almos has the texture like spaghetti. It’s thick and then combined with some sauce that contains some spices and also chicken meats. It’s really delicious, and you can get it easily during lunch time. 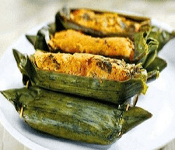 The other food you should taste for your lunch is Pepes. There are so many types of Pepes, starting from the Pepes with vegetables, fish meat, chicken meat, and the other ingredients. It’ll take a little bit more time to process it until eatable.

But don’t worry, usually some stalls on the street seel the Pepes in their display. Youc an just pick whataver you want to eat. And also, don’t forget to combine it with rice, to feel the complete taste of rice and pepes. 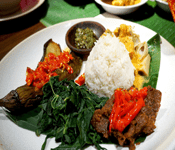 Ah, another famous traditional food  of Indonesia, Nasi Padang. We already talked much about this in previous articles. So here we have the combination of traditional Sumatran meal that everyone can get during lunch.

In the cities, there are some Padang Restaurants available. So, for the people who want to have a good meal for their lunch, they can get one so easily by visiting one of the restuarants in their city. It won’t take long to get one delicious Nasi Padang. 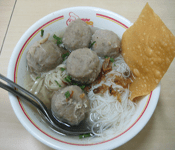 And the simplest one also the best set you can get for your lunch is Bakso. For you who don’t know what Bakso actually is, it’s basically means meatball in English. But not only meatballs, in Indonesia they also combined with the delicious soup and other side dish.

For the fried side dish, there are so many options. People usually go for the Goreng, there is the long version or the flower (short) version. If you order one bowl of Bakso, make sure that you choose the right side dish that you want. It’s better than choose randomly. 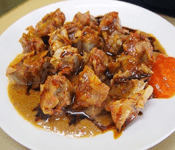 Of course, we can not miss the Siomay. This traditonal food of Bandung is also a food that really fit fro the lunch. Eating it won’t take much of the time, so you can spend your remaining lunch time to do another thing.

With such a low price, you can get one plate of Siomay easily by the sellers who use Siomay wagon. You can easily notice the word Siomay on it. Beside good for lunch, Siomay is also good for breakfast. At least two plates of it can give your energy boost for the day.

Other than those 10 foods, you can also pick this menu that has some other snacks or meals that you can pick for your lunch. So here are the seven of them available :

Yep, that’s our complete list of the foods of typical lunch in Indonesia. Thet have this kind of refreshing taste that really good for the day, espedcially for the people that start to be sleepy during the work break. It’s the most suitable time to consume one of the menus on the list as refresher for you. By doing so, you can have your spirit back in the place, and can be ready for the next work schedule.

17 Activities to Do in Bali That You Should Try