14 Facts About Bali Food You Will Surprise 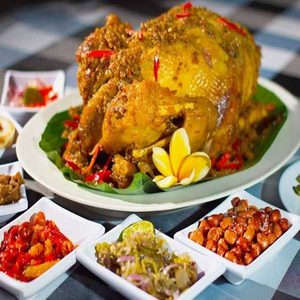 In addition to the famous island of Bali with stunning natural attractions, it is incomplete if you are in Bali and try various Balinese culinary varieties.

Well, for you, culinary love is perfect to try and taste all of these foods. Here they are tastiest best seafood in Jimbaran Bali you must try it.

1. Bali Has Special Chefs or Banjars

Every village in Bali has its own chief cook called be lawa. Be Lawa is responsible for leading a joint cooking ritual starting from compiling a shopping list, determining the portion of dishes, arranging the flow of the cooking process and so on. Be happy from a certain village, you can also be asked to become the chief cook at another place and can be a judge during a cooking competition in Bali. Just for your recommendation are delicious best foods in Jimbaran Bali.

The ingredients used for cooking in traditional Balinese ceremonies are chosen based on Tattwa Darsana or Sila Sasana, who recommend using animal meat from land, water, and air as offerings. This does sound unusual and strange.

In ancient times, turtle meat was often used as a dish for traditional ceremonies. But now, considering turtles are protected animals, the capture of turtles for the sake of traditional ceremonies must go through a permit in the form of a letter signed by religious leaders and related agencies. This is so that there will be no illegal hunting of turtles in the wild.

3. In Bali, there are many gulping pork menus

One of the other facts about Bali food is that people in Bali often use pork in the form of beating or bolster pork in important rituals such as examples of wedding and funeral rituals.

Cooked pork is usually left intact because or is still complete, because Balinese beliefs are said to be, the animals used as offerings must not be cut. Currently, pork bolster dishes are not only found during traditional ceremonies but also in many places to eat in Bali. Hence top and famously delicious food in Bali Indonesia you can reserve.

One of the menus that must be presented during religious and customary ceremonies is lawar. Lawar is a dish in every traditional ceremony or celebration in Bali which is made from minced meat, vegetables, coconut and a number of herbs.

There are several types of lawar, namely real lawar (red and made of blood), white lawar, penyon lawar and green lawar. Very unit and only found on the island of Bali.

5. In Bali, you cannot consume beef

One fact about Bali food is not recommended to consume meat from cattle. There are many versions of the reasons why Hindus are not allowed to eat beef.

One of them is closely related to the teaching to respect ‘mother’, not only biological mothers but also ‘mothers’ milk. Cows as animals whose milk is widely used by humans become animals which they deserve to be respected by not eating meat. And until now cows have become sacred animals for residents in Bali. The following are the most common food in Bali with authentic taste.

6. In Bali the men who cook food

A very unique habit that only exists in Bali. In certain events, those who are required to cook dishes for the ceremony are men.

The men in a village, shoulder to shoulder cooking dishes for the ceremony, while the women got the task of making handicrafts for offerings.

No wonder the men can explain the making of lawar or bolster pigs in detail to curious tourists. And this tradition is still being carried out.

7. Food is a symbol of offerings for Balinese people

The Hindu religious beliefs adopted, made Balinese people believe that food was one of the things offered to the gods. The use of food as an offering to the god is not only done during religious ceremonies but also in daily life.

When visiting Bali, you will often find offerings placed in front of the house or in many places in Bali every day. This is what has become a tradition and regards it as one of the teachings of their religion. The menu that you must try is delicious and popular foods to Eat in Bali.

8. The Balinese food menu is made from bee larvae

In another version of Balinese salad, this one uses bee larvae. Crispy larvae are extracted from beehives by boiling nests, and spices of commonly used lawar mixes and raw young papaya are then added to the mixture, resulting in a mild, sweet, crunchy, spicy salad. Beehives are not commonly found on the market and are increasingly difficult.

As a result, this surprisingly delicious menu of dishes has become a rare delicacy. This food is believed to be a blood pressure-lowering drug and good for body health.

9. The menu of milk satay in Bali

The following facts about Bali food are unique menus of milk satay from cows. This menu is only reserved for Balinese who are Muslim because this menu can only be found in the fasting month or the month of Ramadan.

Satay or satay is a word used to describe every food item prepared and served with a skewer. This type of satay is different from another satay because it is made from white meat, with its elastic texture. Following are menu choices best seafood restaurants in Bali Jimbaran.

If you go to Bali and order some food menus in the restaurant, don’t be surprised if the bill will get a high number.

Because the restaurant tax in Bali is very large, reaching 21%. So before you decide you will eat in an expensive restaurant, find out first the tax costs and also the menu prices do not let that make your wallet pocket conceded.

Another thing you need to know about the facts about Bali food is as follows:

Hopefully, the explanation of the facts about Bali food becomes your recommendation to find out the uniqueness and characteristics of the menu on the island of the Gods.