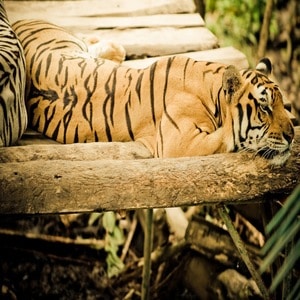 Seeing and knowing that the tiger population that is currently starting to become extinct is really sad and also concerning.

Endemic animals should still be there and can still be protected from various extinctions, including examples of poaching.

However, do you know that at this time the development of the Balinese tiger has suffered extinction?. Hence about the interesting facts about Indonesia Tiger, you have to know.

Since the opening of residential and agricultural land in Bali, since then the life of the Balinese tiger has been declared extinct. Maybe for now you can only see replicas and history.

Therefore, it is very unfortunate, the following will be discussed further about the facts about Bali Tigers you should know:

1. The Bali Tiger is Extinct

Since the 1930s Bali tigers have been declared extinct, this is due to a large number of illegal hunting and forest encroachment into agriculture and settlements.

Plus at that time there was no law governing animals protected so that local residents and invaders were free to kill tigers. And make them as decoration or consume meat. Here are an example of uniqueness and interesting facts of Javan Tigers you will know.

2. Bali Tiger The Smallest Species Among Its Types

Facts about Bali Tigers are the smallest animals or subspecies from various other tiger subspecies. Weight or weight does not exceed 100 kg.

3. The Bali Tiger is an Endemic Animal Island of Bali

The Balinese tiger is one of the endemic animals in Bali because its population only lives and develops on the island.

The Balinese tiger became very popular in its time, because of that many residents were eyeing and hunting for it as a form of protection and also avoided the safety and danger of these animals. Things you need to know about the interesting facts of Sumatra Tiger in Indonesia.

4. The Balinese Tiger Still Relates to the Javan Tiger

Dark lines on the Balinese Tiger tend to be wide and branched where between these lines there are small black spots. The skull of a Balinese tiger can be identified by looking at the differences in the teeth and nose bones, which distinguishes it from other types of subspecies.

5. The Balinese Tiger Began to be Hunted Since The Colonial Era

Facts about Bali Tigers that you must know that tiger hunting has existed since the Dutch colony. Where at that time the invaders began to occupy the island of Bali and began hunting tigers as decoration and hunting activities.

Because that is what makes Balinese endemic animals become extinct and cannot be found until now. The following is about the scope and Sumatran tigers conservation programs and efforts.

6. Many Ornaments Originating From the Body of a Balinese Tiger

The next fact regarding the Balinese tiger is that many of the time the tiger’s body was used as a decoration for display, or used as a collection by irresponsible hunters.

By preserving it using chemicals, in this day and age it certainly violates the law. And can be snared with protected animal protection articles and criminal acts.

7. Bali Tigers Are Hunted For Their Body And Organs To Be Taken

Furthermore, it is also not uncommon for Balinese tiger hunting, body parts, and organs used as food or medicine.

And the fur can be used as a material for making clothes or other decorative materials. Until now, there are still many tiger hunts whose purpose is still the same, therefore a law is protected as protected animals and tigers do indeed include one extinct animal species which is the state’s obligation to remain protected.

Habitat is decreasing and avoiding poaching, quarantine and breeding sites are made in Indonesia, especially in Sumatra. Things to know about the world Sumatran tigers facts and conservation.

8. Bali Tiger is An Animal that Likes Water

One of the facts about Bali’s other Tigers, the Balinese tiger also has the same habits as other tigers. Balinese tigers like water activities, they like to play water when they are young.

Therefore, tigers are also adept at swimming even they are able to survive in the water to keep their body moist and not dehydrated especially in the very hot air.

Tiger species that are not anti-water are different from their relatives, cats that do not like water at all. So that the tiger is able to prey on other animals even in the water.

9. The Bali Tiger Can Capture Its Prey Quickly

In addition to his hind legs, tiger claws are also very strong so that with a single swipe it can destroy the skull of a large bear, very fast and accurate. Tigers often hunt alone, except to catch large animals and then ambush with their herds.

Tigers are also an animal that likes to ambush, so if suddenly crossing with tigers in the forest rarely humans are attacked unless they feel threatened. Usually, tigers are able to bite the neck so that the prey quickly dies and immediately preys on the hunt. Several choices and recommendations for a best place in Indonesia to see Orang Utans.

10. The Balinese Tiger Has a Javanese Tiger-like Pattern

Facts about Bali other tigers are having the same type of pattern as the species brother, the Javan tiger. The lines on the body of each tiger are different. It is like a human fingerprint. With a dark-colored line pattern.

The Balinese tiger has a slightly short and dense orange-colored fur accompanied by fewer dark stripes compared to other tiger subspecies in Indonesia.

The dark line on the Balinese Tiger tends to widen and the branch between these lines, there are small black spots, where the stripes have their own functions, in addition to making the tiger unique and interesting animals.

Apart from that, the facts about Bali other tigers that you can know are:

Some explanations about the facts about Bali Tigers, hopefully, useful in increasing your knowledge about the world of fauna, namely tigers.

14 Must Visit Markets in Bali

14 Facts About Bali Food You Will Surprise