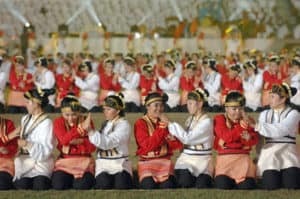 Saman Dance is set by UNESCO as the Intangible Cultural Heritage Presentation Representative List in the 6th Session of the Intergovernmental Committee for the Protection of Cultural Heritage Not the UNESCO objects in Bali, November 24, 2011. Here are the facts about Saman dance that you can learn.

In contrast to some other dance, Saman dance should only be played by young male dancers. This has been around long ago. They will be singing, clapping, clapping their chest and groin to a certain rhythm, accompanied by the body in all directions. It takes concentration and high stamina to play this dance.

However, in further development, this dance is also played by women. Another opinion said this dance is danced less than 10 people, with details of 8 dancers and 2 people as a giver of cue while singing.

On 14 August 2017, MURI set a new record on this Saman dance. If there are 5,054 dancers in 2010 playing Saman dance simultaneously, then this year the number more than doubled, that is 12.272 people. This number exceeds the original plan of only 10,001 people.

In terms of history, Saman Dance has existed since the 13th century and developed by Sheikh Saman. Initially, this dance is used as a medium to spread Islam religion and provide education, advice, to teach about compactness. Saman Dance now has a broader function as entertainment and art show for the wealth in the country. Before the Saman began, the custom leaders appeared to represent the local community. Adat leaders provide useful advice to the players and the audience. The poetry in Saman dance also contains advices and dakwah.

This dance is called Saman because it was created by a Gayo cleric named Syekh Saman in about XIV century AD, from the Gayo highlands. Initially, this dance was just a folk game called Pok Ane. However, then added the accompaniment of poems that contain the praise to Allah SWT, and also accompanied by a combination of the tap of the dancers. At that time, saman dance became one of the da’wah media.

Saman dance is very interesting. Saman dance shows are not only popular in our own country, but also popular in foreign countries such as Australia and Europe. Recently saman dance in the show in Australia to commemorate the great tsunami disaster on December 26, 2006 ago. Therefore, we should be proud of the arts we have, and preserve them from extinction.

Saman Dance is a dance that comes from Gayo tribe, Aceh. Usually this dance is performed to celebrate important events in adat. The poem uses Gayo Language. This dance is also shown to celebrate the birth of Prophet Muhammad SAW.

Usually, saman dance does not require the accompaniment of a musical instrument. This dance is only accompanied by the sound of the dancers and their applause. It is then combined with a chest and groin strike as a counterweight and flung the body in different directions.

This dance is guided by a leader called a sheikh. Because uniformity of formation and timeliness is a must in performing this dance, then the dancers must have a high concentration. They have to practice seriously in order to perform perfectly.

It is said that the first dance saman played by men because this dance “rough” mean mean here is very rarely found movement that requires grace movement because of clapping motion and precision is needed. Saman dance is a dance that requires extraordinary cohesiveness and trust from every dancer and musician.

The costumes used in saman dancers are in the form of Malay clothes, trousers, socks, hats, sashes, belts, songkets and hoods. Then, the veil is relative because some of the dancers are some who use a veil and some are hair in cepol or dikonde upwards. And to make up on the dancers relative saman depends on each team each.

All in all, Saman dance popularity has been spread in all over the world. We as Indonesians should be proud of those facts. It means that Saman dance add the list of cultural heritage in Indonesia.

13 Unique Type of Chicken in Indonesia