13 Unique Type of Chicken in Indonesia

Indonesia is a very rich country. Not only rich in natural resources, Indonesia also has various types of flora and fauna. There are thousands and even millions of animal species that can only be found in Indonesia. One of them is chicken.

Chicken is the most common poultry compared to other types of birds because of its many species in Indonesia. Therefore, it is important for you to know the types of chickens that exist in Indonesia. Here are the list of the chicken. 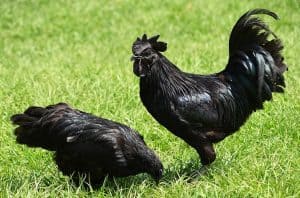 The chicken of cemani is a type of chicken that grows in the area of Magelang and Temanggung, Central Java. However, at this time Cemani chicken has already spread in various regions of Indonesia.

Due to dark black color, many people in Indonesia symbolize this chicken as a devil chicken. However, it is believed that cemani chicken has a special ability to cure many various diseases. That is why this chicken is hunted by the people from various regions in Indonesia. 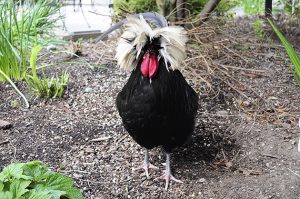 Poland chicken or often also called Black Poland. Despite the name is Poland, it turns out this chicken is not from polish. This hometown of chicken is Russia. They are categorized as a unique chicken because their shape.

The colour is black smooth, while the rooster has a horn-like or V-shaped jaw and bright red color. Behind the cockscomb there is a crest or long crown feathers, bushy and stiff white. The cockscomb of the hen does not appear because it is covered in frizzy crown fur. 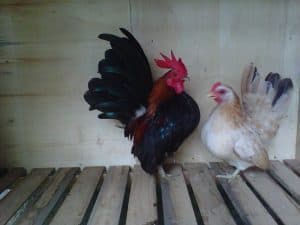 If you used to know kate chicken as the smallest chicken in the world, now the title was taken by chicken serama. Chicken that comes from this neighbor country, known as kate serama, but theserama different from kate, serama is a chicken that has a smaller weight than kate chicken, their weight is only about 8 ounces or 1 kg only. Meanwhile, female chicks are only 5 ounces weight.

This chicken has quite a lot of fans in Indonesia. It is not only because of his small body, but also a unique body shape. The unique of this chicken is the small body. Moreover, the shape of chicken can puff out the chest so it looks dashing.  They look like the letter “S”. 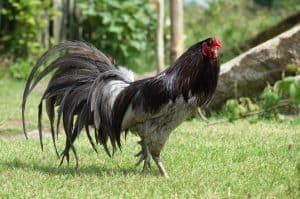 Sumatra Chicken is a native chicken originated and developed in West Sumatra. Therefore, this chicken is named after Sumatra chicken. Characteristic of Sumatran chicken: firm stature and gallant but small in size. Rooster has a small head size but a wide throat. In addition, he has a short beak, solid and black. Little ears are red or black.

It also often used as the pet for the people in Indonesia. Unfortunately, today there are not many people like to farm this type of chicken that cause this chicken becomes rare.

Kukuak balenggek or balenggek rooster is a local chicken in West Sumatra, which comes from the District of Payung Sakaki and Tigo Lurah. The people of Minang usually call the chicken kukuak balenggek with the term balenggek which means a storied rhythm, or baindiak according to local dialect. This is because the rooster rooster kukuak balenggek has a rhythm of the stratum ranging from 3 lenggak to 12 lenggek.

There are even able to crow up to 19 lenggek. In chicken kukuak balenggek voice or cigarette is divided into three parts, namely the front, middle and end or lenggek kokok. Compared to the usual rooster only has a crow consisting of 4 syllables and the last syllable is longer than the previous three syllables. 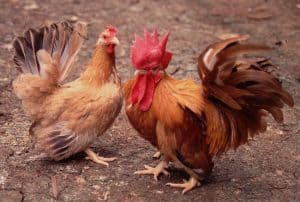 This type of chicken is the most popular type in Indonesia. It usually used as the favorite pet for most of Indonesians since its mini size. 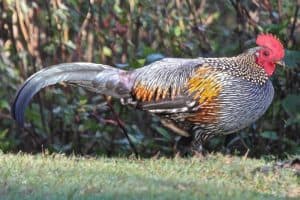 This chicken is medium size, rooster with a length of about 80cm. Female chickens are smaller, with a length of about 38cm. The male forest chicken has neck, neck and black-and-white gray coats with red facial skin, white patches on the ears, brownish yellow beak, and yellow iris eye. A purplish black tail with a long tail feather that is long and curved downwards. The lower side of its body is gray-white and the legs are bright red yellow with a spur.

The gray forest chickens are scattered and endemic in dry, dry tropical forests in central, western and southern India. The female chickens usually incubate between three to five white or reddish white eggs that are harbored by the mains for about three weeks. 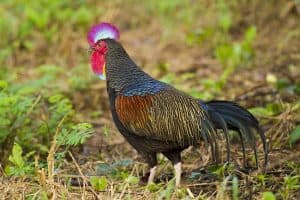 The rooster has a size of about 70 cm long and weighs about 0.7-1.5 kg. The black chestnut hair blends with a glossy green finish with a yellowish tip, long curved tail feathers, and black. Small neck feathers, yellowish red, flat round pervert, single wing and the sound of the crow “ce-ki-krek”.

The female green forest has a characteristic length of about 40 cm, pale yellow feathers, weighs 0,5 – 0,8 kg and egg production 3 – 5 grains / season. This chicken has the beautiful feather. 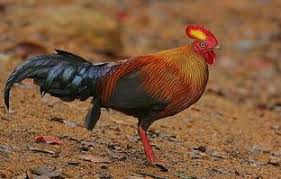 Red jungle fowl is a type of  jungle chicken that spread quite widely, including in Indonesia, China, and India. This type of chicken has 5 sub-species, among others: Gallus-gallus in Sumatra and Sulawesi and Gallus-gallus bankiva on the island of Java and Madura.

While the other three species are located outside of India, in India and Bangladesh there are Gallus murghi, in Myanmar and vietnam there are Gallus spadiceus, and in South China and Hainan there are Gallus jaboullei. The Red Junglefowl (Gallus-gallus bankiva) scattered on the island of Java and Madura have male adult weight 0.7 kg and female 0.4 kg.

Bekisar is a typical animal Kangean Island, Sumenep regency, the type of chicken that became the pride of people who came from east Java. The bekisar is a type of chicken from a mixture between a female chicken with a green forest chicken. The special feature of the most prominent breeder cock is the shape of the neck feather that ends round / oval rather than taper.

Pelung Chicken is a native local chicken that develops in Cianjur and Sukabumi areas of West Java. Its characteristics have a large and sturdy body, when standing upright crop looks prominent. Her legs are long and strong with thick fleshy thighs.

The rooster has the big jaws, erect, jagged and bright red while in the hen does not develop well. It looks like unique and beautiful for a pet at your home.

As the name implies this chicken does have a voice like people who are laughing, his distinctive voice makes this chicken as an aduaan chicken, their sound category is divided into the first 3 sounds laugh gretek, dangdut voice, and slow voice.

However, for those of you who want to keep them to be ornamental animals in this chicken house just for you to choose besides his typical voice chicken will also be the spotlight of many people.

This local chicken comes from Puteran Island, Sumenep Regency, Madura, East Java. The specialty is the sound of the crow that is long enough (landeng) like Pelung chicken. The physical form of Gaok male chicken is big, strapping, and handsome. The size of the comb and the pial is large and red. The yellowish color dominates the feathers, plus a red and black tinge on some parts. The legs are yellow.

After reading those types of chicken, you can conclude that Indonesia really an awesome country. If you are chicken lover, you can take them as one of your pets at home.

16 Type of School in Indonesia You Must Know