Maybe some of us already know about the endangered animals in this world. We can see them in our television channel like National geographic for example, or other channels in local stations. Many of them are from Asia region, especially Indonesia country. In this country you can take a look at the long list of the endangered animals like Sumatran tigers, one horned rhinos, the kasuari bird, and also the animal we’re gonna talk about, the Orangutan.

This orangutan is almost have the same characteristics with the monkeys, only they’re more bigger than them. Plus the hair on all of their body  make them both have really different shape. Monkeys a little tiny ones and aggressive, while Orangutans with their big bush of hair on their body with more calm attitude. Well anyway, we should understand first about the two species of Orangutans.

We distinguish the Orangutans types based on their habitat or location. So there are two types of endangered Orangutans called Borneo and Sumatran Orangutans. 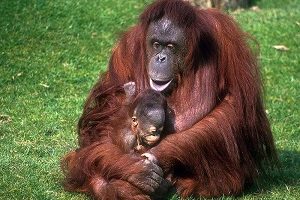 Like you guess, the Orangutans of Borneo live in the deep forest in Borneo island. They actually bigger than Sumatrans. This borneo Orangutans can grow up to 1,5 meter height with 50 to 90 weight. They look more furrish than the Sumatrans, you can see them from far away just by looking at their thick hair.

The male Borneo Orangutan has this thick chin, making his face more bigger than the others. The use them as to increase their sounds, so by then they can group up the other Orangutans when needed in no time. Beside for gathering, the male sounds can be used as the marker for his existence, or maybe to challenge the other male Orangutans to fight.

In 2004, the species of Borneo Orangutans estimated in the number of 54 thousands, and keep decreasing until now. This number is worrying of course, so many of the organizations sympathize with this sad condition. They help the government to maintain the Orangutans habitat, and keep them out from extinction. 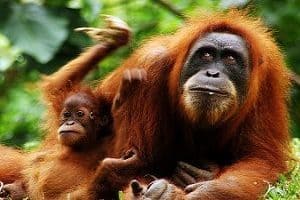 Located in the forest of Sumatra island, there’s a horde of Orangutans that inhabited the area since long time ago. With the open forest policy made by some irresponsible people, the number of Sumatran Orangutans keep decreasing through years. Some of them even burnt alive in several occasions, which is a very sad situation out of all things.

Anyway beside the form which is smaller than Borneos, the Sumatrans Orangutans are likely to eat fruits and insects more than Orangutans in Borneo. The Sumatrans also look smarter, because they can use the nature as the helper for their daily needs. The perfect example is the usage of the branch for hunting insects inside the tree holes. They will sharp the branch first and then start to dig the holes.

This smart move that they’re doing is inspire some people to understand more about them. Like NHNZ for example, they made the show of In The Realm of The Red Ape which showed how smart the Sumatran Orangutan is. The Orangutan used the simple stuff like branch to do anything like reaching the high spot and other else. They haven’t trained of course, it’s their natural habit.

The biggest and the most evil threat don’t come from the animals, but from us humans. Their habitats keep decreasing from year to year. It’s hard to live in such a tight place with no things to discover for eat and fulfill the daily needs. In our 20 years of life, Orangutans have lost 80% of their territories. So by that, many if them finally came around the nearby village looking for foods. The result? Most of them burnt by villagers.

Humans threat them far worse the the actual predators. For example, when the mother orangutan came to the village with her own child, the mother will be killed and the childling will be sold in the black market. This problem of open land policy, conversion, and also the illegal trading make the extinction of Orangutans will come close in near future.

The illegal lodging also has the most important aspect in Orangutans extinction. In the year of 2000, Indonesia lost 2,6 hectares of its forest. The signs of lost can not be traced by any way. So with 5 years passing, they finally discover that the forest has lost lots of hectares within only few years. At least 1,7 hectares forest lost due to the illegal lodging and open land policy.

Usually they “erased” those wide areas to change them into gardens or farms. People in the village usually did that thing, sadly without thinking about the other habitats. Beside those things about policy and demography, the other thing that still be a highest threat is the illegal hunting. You know, there’s Indonesian strict rules about hunting, catching, or trading the wild rare animals, like Orangutan.

The forest police of Indonesia keep this threat to be low as possible by doing some patrols into the wild areas of the forest. Usually they take “action” to the culprit who did those vile things. The culprit will be charged with some serious penalties by the judge. But, even though the rules are pretty clear, many people still do the hunting until this very time.

Like we saw in social medias, many irresponsible people in Indonesia still hunt these poor things and showed them to the world by uploading the pictures of the dead animals. But moments after, they’ve got caught anyway by the police and Indonesian army.

To protect the poor Orangutans, the government took a really serious action, gathering with the other nations and organizations like America, International Conservation, to focus on protecting their habitat in the forest of Sumatra. This program called TFCA, has the potential to highly reduced the decrease of Orangutans and keep them safe from other threats.

They keep increasing the program efectiveness and length for the years in the future, to make the conservation more success than before. The progrem they’ve improved include some stuff like restoring habitat, improving regulations about tropical forest, policies affecting the development of conservation in Sumatra, and improving participation with the basis of local potention.

Beside the government act with other organizations packed in one program called TFCA, there’s another great group called WWF or World Wildlife Fund who has the important role too in this conservation act. WWF do this activity called the heart of Borneo to protect those Orangutans in Borneo’s forest.

The act include all of the people participated and the government to make it more smooth in the action. The focusing the conservation act on the West and Central Borneo. They do it willingly with a hope in their heart, to make the Orangutans far away from extinction. To keep all the rare animals safe and prevent them to reach their ends.

That’s our topic today, the Endangered Orangutans in Indonesia. For ourselves, we can help the government and many other useful organizations to do the shout out about protecting wild animals, like Orangutans. You can do it by writing something about it in your social medias, and do the campaign about protecting Orangutans. With your help, we can make the Orangutans stay with us still.