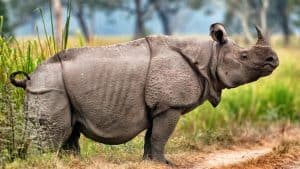 The Javan rhinoceros is one of the rarest animals in the world. The population development has experienced a critical point in the 1960s where only found about 20 rhinos. Since the 1980s until now the population growth is quite stable in the range of 40-60 rhinos, but this number is still risky from extinction.

Ideally, it should be more than 500 rhinos with a wider range of habitats. Currently Javan Rhino living habitat is limited only in Ujung Kulon National Park, the most western tip of Java Island.  (see also: Balinese Wedding Traditions)

In the past Javan rhinoceros not only exist on the island of Java, but spread to mainland Asia ranging from Vietnam to Bengal, India. Large-scale hunting is suspected to be the main cause of depreciation of the population. In Indonesia itself in the 18th century Javan rhino once regarded as a pest that disrupts plantation crops. Even the Dutch colonial government in power at that time had held a contest with a prize of 10 guilders for anyone who managed to kill him.

The scientific name of the Javan Rhinoceros is Rhinoceros sondaicus. The naming was taken from the Greek, “rhino” meaning nose, “ceros” meaning horn. While “sondaicus” refers to the word “Sunda” which is on the island of Java. In English it is called Javan Rhino.
In general, the Javan rhino has the following physical characteristics:

Javan rhinos live in tropical forests that are always green with high rainfall. In Java, these animals have been found in highland forests and lowland forests. In 1939, a German-born botanist, Franz Wilhelm Junghun, once reported seeing a rhino around the summit of Mount Gede. (see also: Bali Facts)
While the Javan Rhinoceros in Sumatera Island is only found in lowland forests. This is predicted because of competition with Sumatran rhinoceros living in the mountains. Now the existence of Javan Rhinoceros found only in lowland forests in the area of Ujung Kulon National Park. 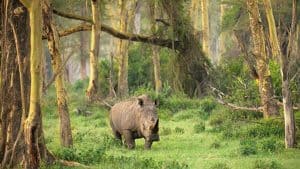 Before entering the 19th century, in addition to Java, Javan rhinoceros was found living in mainland Asia. Several studies have reported the presence of these animals in Bengal, India, Bangladesh, Indochina, Southeast China, the Malay peninsula and Sumatra. (see also: Customs of Indonesia)

At the beginning of the 20th century there were still reports of Javanese Rhinos in Burma, Laos, Cambodia and Vietnam. The last Javan rhinoceros outside Java Island is located in Vietnam’s Cat Tien National Park and is known to have gone extinct in 2011.  (see also: Traditional Market in Indonesia)

In Indonesia, before the 19th century the Javan rhinoceros was confirmed to have lived on the island of Sumatra from Aceh to Lampung. While its presence in the island of Java spread to Central Java. In 1833 they were still found in Wonosobo. Another point that is known to be the habitat of the Javan Rhinoceros are Mount Tangkuban Perahu, Mount Papandayan, Mount Ciremai and Mount Gede Pangrango. Even this animal has been reportedly found in Karawang. The existence of the Javan Rhino outside Ujung Kulon, last recorded in Karangnunggal Tasikmalaya, at that time in 1834 a Dutch shoot the rhino and until now the specimen is stored in the Museum of Zoology, Bogor. (see also: Largest Ethnic Groups of Indonesia)

Currently, the Javan Rhino is found only in Ujung Kulon National Park. Not all national parks become rhino habitat. These animals only live at some point only. Some areas that rhino habitat, among others, in the southern areas of national parks such as Cibandawoh, Cikeusik, Citadahan and Cibunar. And on the northern Ujung Kulon peninsula such as Cigenter, Cikarang, Nyiur, Nyawaan, Cimayang, Citerjun, and Cijengkol. (Read also: Indonesian cultural festival – Indonesian Beliefs and Values)

The population census of the Javan Rhinoceros in Ujung Kulon was first conducted in 1967. It was estimated that there were 21-28 rhinos, a very critical number to survive. Fortunately from year to year the rhino population is always increasing. Until 1975 the number is known to grow to about 45 rhinos. Since the early 80’s until now the population of Javan Rhinoceros in Ujung Kulon is relatively stable. (see also: Hinduism in Bali)

The maximum rate of growth is about 1% per year. It is estimated that Ujung Kulon’s carrying capacity for rhino population ranges around 50 rhinos. For that reason experts advise to open a second habitat for the Javan Rhinoceros. (see also: Volcanoes in Indonesia)
The last monitoring conducted by the Ujung Kulon National Park in December 2014 revealed the number of Javan Rhinoceros that lived there are around 57 rhinos. Reduced from the previous 60 tails, because in the period 2011-2014 there are 4 deaths and one birth. It is alarming that the composition of the sex is not balanced, which consists of 31 male rhinoceros and 26 female rhinos. Though the ideal composition is one male rhino versus 4 female rhinos. (see also: History of Prambanan Temple)

Then, there are several behavior which is commonly done by Rhinoceros in their daily life, as follows:

Javan rhinos are the herbivorous animals, primarily forage foods in the form of shoots or plant buds. Several types of plants that are popular animals include forest kedondong (Spondias pinnata), seals (Dillenia excelsa), sulangkar (Leea sambucina) and tepus (Amomum spp.). The availability of this plant is pretty much in Ujung Kulon National Park. Later known to also eat a type of plant bangban (Donax cannaeformis) which previously was never recorded as rhino feed. In addition to the green, like other animals, rhinos also consume mineral salts contained in soil or water.  (see also: History of Prambanan Temple)

Javan rhinoceros can live about 30-40 years. Each pregnancy usually contains only one child. It is not known exactly how long the Javan Rhino contains, but it is estimated for 15-16 months. Likewise with the range between pregnancies, but estimated about 2-3 years.  (see also: Largest Ethnic Groups of Indonesia).

Javan rhino is a solitary animal or aloof and never found in groups. Even in its natural habitat in Ujung Kulon, its existence is very rare. The evidence of his life is known from traces and hidden cameras. One of his passions is wallowing in water or mud.

Meanwhile, There are threats for the existence of Javan Rhinoceros. Therefore, this species is have status as one of endangered animals in Indonesia. Some of threats are come from natural resources in Indonesia. As follows: 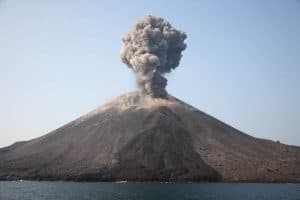 The habitat of Javan rhinoceros that only concentrated in the Ujung Kulon area becomes a separate issue considering the area is very vulnerable to natural disasters.

ated off the coast of Ujung Kulon was erupted and caused a devastating echo and tsunami disaster that devastated the area. The eruption left a small krakatau who is still active and at times can erupt again. (see also: Indonesian Floating Market)

Likewise with the threat of disease outbreaks, if at any time there are outbreaks that attack the rhino is not impossible all the rhinos in Ujung Kulon could be affected. (Read also: Indonesian Air Force – Indonesia Lifestyle)

Invasive plant (Arenga obtusifolia) threatens the population of Javan Rhino through the availability of feed. Langkap is a kind of palm plant that is often used as raw material for making palm sugar. In Ujung Kulon this plant urges other plants to feed rhinoceros. The handling of these threats is done by reducing the population of langkap plants. From some experiments a reduction of 50% of the population could increase the availability of rhino feed. Although only lasted 1-2 years before the plant back again dominate.

Rhinoceros is type of solitary animal which is very difficult to observe. Ujung Kulon National Park’s Monitoring often cant find them when go out to check directly into forest. Therefore, the existence of these animals can be done using camera trap. All of camera trap installed in every place which loved by Rhino the most. The installing of camera trap is in order to control the movement and all of the existence of rhino in daily life. Meanwhile, their favorite places are in foraging and wallowing.

On the other hand, the efforts and cooperation of various parties to conserve Javan Rhinoceros get positive results. One of goof news the new birth of baby Javan rhinoceros in 2015. There are seven baby rhino which captured by camera trap. Therefore, there are 64 Javan Rhinos which still exist in Ujung Kulon National Park. Of course, its sign of good news. Thus, Rhino is one of animals which hard to reproduce. The duration of female Rhino’s pregnancy is take longer than other animals. its take only two or three times during their lifetime.

Currently, the existence of Rhino in Ujung Kulon National Park face threats by  the existence of Arenga Obtusifolia, one of plant that bolock sun which needed by rhino. In order to prevent the growth of this plant, WWF Indonesia developed project to control this situation. Then, in addition to degederation of rhino habitat quality due to the presence of that plant, as well as the phenomenon of climate change then rising sea level. The Government make another places to make new habitat in order to prevent inbreeding happened for Javan rhino.

Those are complete explanation about Javan Rhinoceros Facts in Indonesia.