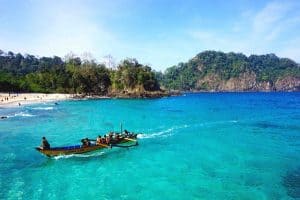 Some of you may think about Yogyakarta, Bandung, or Surabaya if you want to spend some vacations in Java. But, if you want to visit one of beautiful destination place in East Java, you need to consider Banyuwangi as your choice. Located in the east of East Java, It has a direct access of boats to cross to Bali. Isn’t it interesting after spending some mini vacation in Banyuwangi, then continuing your travel to Bali?

Banyuwangi has some promising areas that you can explore with cheap budget such as Red Sand Beach, Watu Dodol Beach, Kawah Ijen, Kalibendo and Lider Waterfall, and many more. But it’s not enough if your visit to Banyuwangi doesn’t spend a single time in Green Bay.

Green Bay is one of beaches that Banyuwangi tourism government could offer to traveler as a unique destination. the beach is named after its water colour that’s bluish to greenish. It is located in Sarongan village, 91 km from downtown. It’s very far but its beauty offers fresh and natural air blowing from one side to other side. You can find other beaches as your travel visit options here Best Beaches in Java Indonesia – Gems You Can Find.

This bay is very accessible with every road vehicle, such as motorcycle, car, jeep, bike, and many others. It’s also accessible from Jember or form Rajegwesi Beach using boats. As the weaves are usually big, some of visitors may be wet when arriving in the bay, so be prepared if you chose to access the bay from Rajegwesi beach.

2. Exotic Destination Compared to Other Beach

Green Bay has unique characteristic because of its greenish water. But do you know why? That’s because Green Bay is built around shallow water flow and below that, greenish algae grows spreading across the beach which alter the colour water to be green.

But that’s not the only thing that makes Green Bay attractive. It has amazingly white smooth sand that you could lay on and feeling relax after your stressful days.

It also has waterfall in the east side of the beach, which people usually use to take a bath after playing around the beach. The local myths say that the waterfall is usually used by fairies in some period of time when they visit earth. Probably if you’re lucky you’ll meet one.

Usually people chose mountain or hill to camp for some nights, but Green Bay can be your alternative to have camps as you can feel the fresh wind at night, spend your time with friends, and having some good vacations.

But remember to ask for permission to local officer as the bay still a natural park and it has potential to have wild animals around the area. While you probably could not see sun rise here, these places could offer you that beautiful scenery in the morning: Best Places to See Sunrise in Indonesia : Hills, Temples, and Gems of Indonesia

Yes, you hear it right! Green Bay is one of the tourism destination alongside Beach Rajekwesi. But people usually skip the Green Bay because it has hard track both by land and sea. But that hard work is worth because once you discover the beach, the beautiful scenery awaits with clean and natural calm that will take your vacation in to another level of happiness.

Meru Betiri offers various kind of scenery, mostly flowers. It has some mammals and birds, specifically deer, luwak, leopard, merak, and many others. For the plantations it offers one of the rarest and most unique flower in the world that can only be found in Indonesia, Raflessia. It also has numerous kind of orchid as well. There’s also some wildlife national park in Indonesia that you should know: 15 Wildlife Park in Indonesia That You Should Visit.

Most of beaches in Indonesia has been built into a permanent tourism site that mostly alter its original design. Government put some new and modern design to attract people. Companies build hotel and guest house around the location. Restaurant is opened here and there to serve tourist after a long day visit. That brings benefits to local people, companies, government, investor, and other actors, but that makes the natural design feels loss.

Moreover, with most tourist visit the place, the amount of trash and other environment issue rise because there’s not enough people to handle the situation. Sometimes tourist is just ignorant to keep their own rubbishes that makes the place worse and worse. But you can find other beaches that as clean as Green Bay Banyuwangi, here: The Best Beaches in Indonesia Near Singapore.

That doesn’t happen in Green Bay Banyuwangi. Local people decide to keep it that way without any intervention from human. This is what makes this place unique. It feels very natural with beautiful scenery without any damage from environmental issue or modernity. While it has quite rough route both by land or sea, yet the natural feeling that this place offers is unbelievable.

Those are some informations around Green Bay in Banyuwangi. It’s one of the finest trip that Banyuwangi has that could be an option to visit compared to other tourism site that could make your vacation worth the time. Green Bay is one of the natural and Eco-friendly tourism that needs to be preserved. It’s the role of all the actors both in Banyuwangi and tourists to keep the site clean and natural.

25 Most Beautiful Lakes in Indonesia – Fascinating