The mosque is a worship place for Muslim all over the world. That’s why mosque assumed as sacred place and people can not be entered.  As well as the construction of mosque quite longer. It include the magnificent manufacture with precision and intricate architecture. On the other hand, the founder of mosque absorb the culture and adapted it into architecture. However, mosque also must can accommodate many people who want to pray.

Meanwhile, Indonesia has the largest Muslim population in the world. Then, we can find Muslim people in every region. As well as the existence of mosque is play an important role. Muslim people always go to the mosque in order to pray or meditation. On the other hand, we can find various mosque ranging from large to small.

In 2016, the number of mosques in Indonesia reached up to 1,169,753 mosques. In addition, most of mosques has an unique both of design or architecture. There are several mosques which influenced by various cultures such as Europe, Middle East, Asia, and others.

On the other hand, Indonesia not only has an unique manufacture, but also mosque with the greatest capacity. Then, some of them already recognized as the largest mosque with enchanting architecture in the world. So, there are several largest mosque in Indonesia. 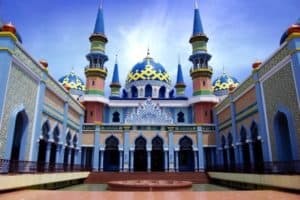 This mosque is standing majestically on the western side of the main city, Tuban. Then, mosque has become an icon of civic pride and also near to one of the important historical sites of Java, namely Sunan Bonang courtyard. Meawhile, the architecture of mosque combines the diverse cultures of various countries like Saudi, Turkey, and India.

In general, the building consists of the main building flanked by four towers at each four corners of the mosque and two buildings porch on the front side. As well as two towers higher than four other towers.

In addition, it uses multicolored light as if to bring the atmosphere of a fairy tale in real life in the city of Tuban. Beside that, there are several heritage which saved in this great mosque such as Holy Qur’an made of leather, Chinese ceramics, heritage, and sarcophagi. 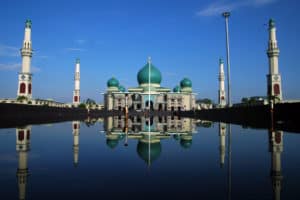 Great Mosque of An-Nur has existed since 1963. However, it was only realized in 1966 when Kaharuddin Nasution become Governor on October 19, 1968.

Then, the architecture of the Great Mosque of An-Nur Riau in Pekanbaru is similar with Taj Mahal, India. The design of architecture was designed by Ir. Roseno with a size of 50 x 50 m, located in a yard that measures 400 x 200 m. Then, it can accommodate up to 4,500 worshipers. Mosque consists of three levels. The upper level is used for prayers, and lower levels for offices and meeting rooms.

On the other hand, Great Mosque of An Nur also has various facilities. Such as education functional from playgrup, kindergarten, elementary, junior high and high school, a comprehensive library and other useful facilities such as halls and meeting rooms, classrooms as well as space for office space. 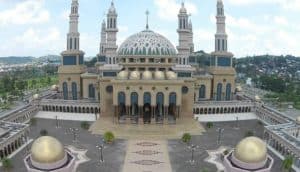 Islamic Center Samarinda located in Teluk Lerong Ulu district, precisely in the city of Samarinda, East Kalimantan. The mosque is the second largest mosque in South-East Asia. and also one of grandest mosque in Indonesia.

On the other hand, it has seven towers with the main tower has approximately 99 meters. The number according to Asmaul Husna. Then, there is a 15 floors building with a height of about 6 meters in each floor. As for the other towers which amounted to 6 pieces and separated. four towers at each corner of the mosque with a height of 70 meters and two others are at the gates with height up to 57 meters. On the other hand, Islamic Center Samarinda can accommodate 10,000 people. 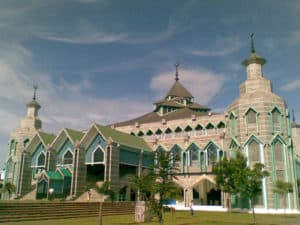 Al-Markaz Al-Islami is one of the most magnificent mosque in Makassar. This mosque was founded in 1994 by General M. Jusuf.  The uniqueness lays on architecture style.

There are a blend of Arabian architecture, Gowa, and Bugis-Makassar. As well as domination of green colors. Meanwhile, It use granite for floor so it makes a big impression soon we enter the entrance. For first wall is using ceramic while in second and third are using granite.

The foundation of the mosque building fitted with 450 strong pole, with a depth of 21 meters. It can accommodate up to 10,000 people and become the largest center of Islamic religious studies in East Indonesia. 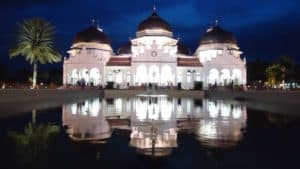 Baiturrahman Grand Mosque is pride of Aceh people. It becomes popular since Tsunami in 2004.

The mosque is one and only building which survived in grand Tsunami which recognized as one of impact from biggest earthquake in Indonesia. Its renovation cost around 20 billion rupiahs. Meanwhile, the funding comes from international aid, including Saudi Charity Campaign. Then, the renovation process was completed on January 15, 2008. Currently, Baiturrahman grand mosque become hubs for Islamic activities for Banda Aceh’s people.

On the other hand, Baiturrahman apparently has a thick history about Aceh. It located in Muhammad Jam street. The building area of approximately 4,000 square meters above area of 31,000 square meters. So, it can accommodate up to 15,000 people for worships. 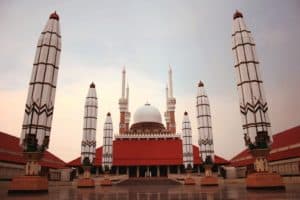 Central Java Grand Mosque is a mosque owned by the province of Central Java province. It located in Semarang and was built from 2001 to 2006. The Great Mosque was inaugurated by Indonesian President Susilo Bambang Yudhoyono on November 14, 2006.

Then, there is a pavilion area with large drum in outside area. Giant drum has a length of 310 cm and 220 cm diameter is replica of drum Pendowo Purworejo. On holidays, the mosque become a place for local people to do sports. There are many activity which indicates that the mosque is not only used for religious rituals, but may have an impact on social activities such as exercise.

On the other hand, the portico area of this mosque has six giant automatic umbrella like the one in the Prophet’s Mosque. While, high respective electric umbrella is 20 meters with a diameter of 14 meters.  Then, it can accommodate up to 15,000 people for do worship. 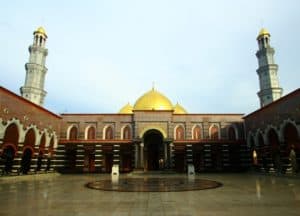 Dian Al-Mahri mosque is better known as Golden Dome Mosque is located in Maruyung Raya street, Depok, West Java. This magnificent mosque can accommodate up to 20,000 worshipers in area of 70 hectares. It was built in April 1999 by a generous philanthropist.

She is a business woman from Banten named Hj Dian Juriah Maimun Al Rashid. She is a wife of Drs H. Maimun Al-Rashid, who bought the land of this area since 1996. On the other hand, the mosque has an area of ​​60 x 120 meters, or about 8,000 square meters. It consists of a main building, hallways outside, shoe room and ablution room.

Meanwhile, this mosque has five domes, one is golden dome and four are small domes around. The entire dome gilded 2 to 3 millimeters thick and crystal mosaic. Then, main dome shape resembles the dome of the Taj Mahal and has a diameter of less than 16 meters, diameter of the middle 20 meters, and 25 meters tall. While four other small dome has a diameter of less than 6 meters, the middle of seven meters, and a height of 8 meters. Moreover, relief decoration on top is made of 18 carat gold. Therefore, this mosque is equivalent as the largest and enchanting mosque in South-East Asia. 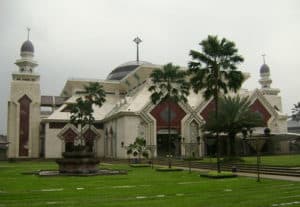 This mosque located in Taman Mini Indonesia Indah (TMII) area. The design of At Tiin is very magnificent so it chosen for most tourist as their spiritual tourism destinations.

Then, the mosque was built in 1997 above a land area up to 70,000 meters. It can accomodate up to 30,000 people in mosque and 2000 people in mosque hall. The name of At Tiin taken from one of the suras of the Qur’an, At-Tin. That is a letter which is a type of fruit. Its very sweet, tasty, and nutritious. On the other hand, the fascinating mosque also equipped with various facilities which can provide comfortable.

Such as recreation rooms, televisions, internet room, library, bedrooms for muezzins, study hall. As well as large parking lot which can accommodate up to 100 motorcycles, 8 buses and 350 cars. In addition, the architecture of this mosque is quietly unique. It lays both of ornament and decoration. As well as the design in indoor or outdoor rooms. 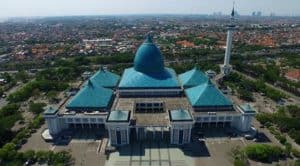 Great Mosque of Al-Akbar is a magnificent mosque with modern architecture.  It located in Pagesangan, Surabaya and was built on August 4, 1995.

Then, it was inaugurated on November 10, 2000 by fourth President of Indonesia, Abdurrahman Wahid. The mosque becomes another icon for spiritual tourism destination. It stood a land area of ​​11.2 hectares with a building area of ​​28,509 square meters.

Then, Al- Akbar mosque can accommodate up to 60,000 people. Meanwhile, the mosque has two floors and is equipped with an elevator and tower. As well as roof consists of one large dome. It supported with four pyramid-shaped domes around. In addition, the entrance consists of 45 main doors. Morever, the design of a dome has leaf structure,  which combination of dark blue and green color that gives the impression of cool and peaceful. Moreover, this mosque has a main building and two other buildings that can penetrate directly into the main building. 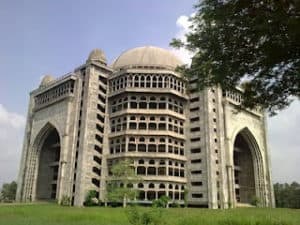 The beginning construction was in April 5, 2000. It located in campus of Al Zaytun area, Indramayu district. Then, it build for almost 6.5 hectares and has seven floors.

Each floor measures up to 99 x 99 meters. Seven floor is the roof of mosque which can accommodate more than 4000 people.

In addition, this mosque has a total height up to 73,125 meters touches the border. People can see the priest in Mihrab (sanctuary). Mihrab itself has a height of 15 meters.

On the other hand, all of construction both of foundation and interior are designed for hundreds and thousands years ago. Its built with  a well-structured of concept, between design, architectures, as well as ornaments.

Moreover, the foundation has earthquake-resistant foundation using Pondation raft. Meanwhile, the mosque capable to accommodate up to 150,000 people for worship. Rahmatan Lil ‘Alamin is the largest mosque compares to mosques in South-East Asia. 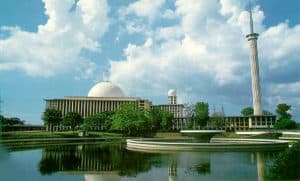 Istiqlal mosque construction takes up to 17 years. In general, the Istiqlal Mosque stands on a land area of ​​9.5 hectares. It includes several building such as  the mosque, parks, parking lots, and the fountain.

Meanwhile, the mosque building itself consists of several parts, including the main house, a preliminary building, giant terrace, towers, and the ground floor. On the other hand, the main floor of the Istiqlal Mosque can accommodate up to 16,000 worshipers. Then, on the right, left, and back there is a five sides of floor that can accommodate up to 61,000 people.

On the main floor of the mosque, there are 12 pillars. It represents the date of birth of Prophet Muhammad SAW. The pillars with 45 diameters are supporting the main dome of the mosque.

On the other hand, Istiqlal has unique architecture. The front of the main floor of the mosque is decorated with marble and calligraphy. While the left and right are lafadz Allah and Muhammad. Then in another room, exactly the middle, there are two sentences of calligraphy.

At the back of the main floor, there are a preliminary building which serves as a liaison upstairs. Preliminary building also functioned to worship, this section can accommodate up to 8,000 worshipers. There are also gigantic terrace which a favorite place for children. The terrace has an area of ​​over 19,000 square meters which also functioned for prayer when the main floor filled with worshipers. Over all, this mosque can accommodate up to 200,000 people and become the largest mosque in Indonesia.

The mosque is representation in order to development of Islam and Muslim, It lays on its architecture, both of ornament or decorations. On the other hand, beautiful mosques can be found throughout the world, as the spread of Islam. many beautiful mosques established in many countries. Mosques looks stunning from the outside, and the views from the inside. Not only beautiful, the capability of mosque also become concerned in order to make Muslim people feeling comfortable when they do worship.