Bali is known as a city for tourism and nightlife activity and also famous for its sunset, so you wouldn’t find many places that offer peace and tranquility in between the chaos of Kuta traffic, even so, you will be surprised to find a quiet Buddhist temples scattered throughout the city. Below will be explained some of those temples that are well known. 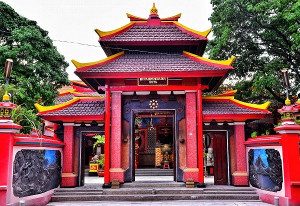 Vihara Dharmayana is inaugurated on February 23, 1980. In that year, the temple also added a special building for Buddhist prayers called Dharmasala building. On August 7, 1982, this pagoda became one of the places of Tenzin Gyatso (14th Dalai Lama) visited on his international tour

The Dharmayana Kuta temple is one of nine Tridharma places of worship that has Tan Hu Cin Jin as the main Shing Bing. This pagoda is located close to Kuta Beach and Ngurah Rai International Airport so it is in a crowded location of traffic. As with most other temples in Bali, this place of worship is not only visited by the Chinese-Indonesian but also the indigenous Balinese who are Buddhist and Hindu, mainly because the adored Kongco has a close relationship with the Kingdom of Mengwi. 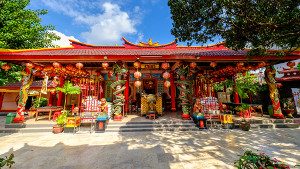 The locals have known the place as Kongco Kuta and established since 1876. It is one of the Buddhist sites in Bali that the 14th Dalai Lama visited Bali in 1982. A unique place of worship under a banyan tree of “four faces of the Buddha” and they also provided sticks of fragrant incense placed on the altar to also add to the spiritual atmosphere of praying in this place. 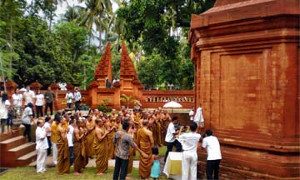 This temple inaugurated on 28 April 2012 and is located in Puja Mandala Complex and can be reached for approximately 15 minutes from Ngurah Rai Airport by motorcycle, car or bus. If you come from the city of Denpasar, then to travel to the Buddha Vihara Guna Nusa Dua then you won’t take too long of a time.

The time required is only about 50 minutes by motorcycle. The beauty of this building is certainly very attractive to visitors, both from local residents and foreigners to enter. Although not everyone can enter this monastery because the Buddhist Monastery is devoted as a place of worship and require serenity and tranquility. 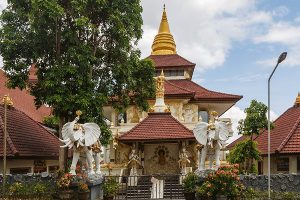 Ling Gwan Kiong is an old Buddhist temple that resided in part of the seaport estate in Singaraja, North Bali. This temple area is located at the local tourist area as the front of this temple directly facing the sea. That’s why so many people who make the temple of T.I.T.D LING GWAN KIONG as a place to take pictures or selfies.

The hallmark of the temple is the presence of a fang shen water turtle, which is kept breeding in the center of the building. Many locals refer to this place as klenteng and the temple dates back to 1873 with relation to the Ching Dynasty, also the temple is a silent testament to the town’s unique history. 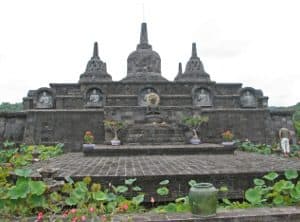 Brahmavihara-Arama began to be established around 1969 and completed in 1970. While in 1973, the place is newly inaugurated as a Buddhist temple. This temple is the largest Buddhist temple in Bali and this monastery is better known as the Banjar Buddhist Temple. The temple also acts as a praying place for Buddhist people during Waisak. This special Buddhist observance is when the monastery place is at its most crowded with monks in attendance.

Brahmavihara-Arama is located in Banjar Tegeha village which belongs to Banjar sub-district, Buleleng district and is about 22 km west of Singaraja or 11 km from Lovina tourist area. From the capital of Denpasar to this monastery takes approximately two hours or about 100 km, through the Denpasar-Bedugul-Singaraja highway. 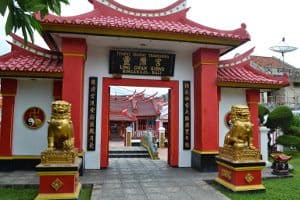 The development of this temple lasted for six years until finally inaugurated in 2012. A celebration of the inauguration of the monastery building was conducted on Wednesday, August 22, 2012. Vihara Satya Dharma is one of the places of Tridharma worship located in the Port of Benoa, Bali.

Though using the term monastery, this place of worship is actually a temple for the three religions (Tridharma), namely Buddhism, Taoism, and Confucianism, as stated on its inauguration inscription. In addition, as well as other temples and monasteries in Bali, this place of worship also shows the existence of an acculturation with Balinese Hindu religion with Padmasana and Tugun Karang pelinggih at the front corner of the yard. This temple is expected to become a place of worship of the sailors who come from various countries and who often stop at the Port of Benoa to unload their cargo 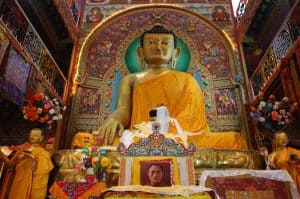 In addition to Cetiya as a place of worship on the third floor, two floors below are used for secretariat together with Gemabudhi and Walubi Bali. The presence of Cetiya named Sakyamuni Buddha received a warm welcome from the people who came to do prayer devotion. It was finally agreed to develop the Sakyamuni Buddhist Cetiya and Buddhist Mother Forum Secretariat (FIB) into Maha Cetiya Sakyamuni Buddha so that it could be performed more widely for the place of devotion and study of Dhamma for Buddhists and sympathizers. 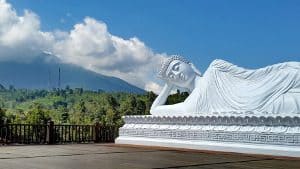 There is a magnificent temple called Vihara Dharma Giri which has been inaugurated in 2007 and where there is a large statue of Sleeping Buddha in Bali that’s built so large and magnificent. This temple is located on Jalan Raya Pupuan, Tabanan, Bali.

Meanwhile, not many people know this vihara place because the main purpose of this monastery was built as a place of worship for Buddhists. But for those of you who want to come just to see the monastery then you are still allowed, as long as you can keep the tranquility because the monastery is a holy place and where the Buddhist are performing the prayer. 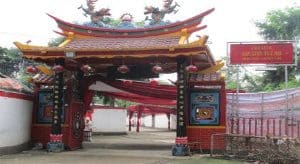 There is a small road in front of it to go directly to the building on the banks of the river surrounded by high-rise buildings. The worshipers of this place come from various faith both from Theravada and from local Hindus and Tridharma people. 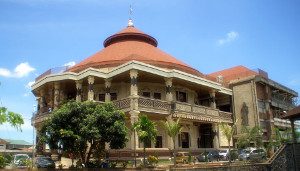 Maitreya sect was born in Bangkok during the Liang Dynasty around the 6th century AD. Many wars occurred during this time until Buddhists expected the arrival of a savior or Maitreya. This is why Chinese culture has considerable influence on Maitreya Buddhism. 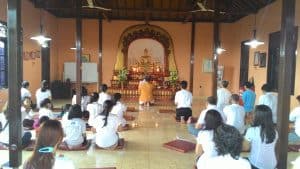 Brahmavihara-Arama is a beautiful monastery and is the largest Buddhist temple in Bali. This place is better known as Banjar Buddhist Temple because of its location in the village of Banjar, Buleleng. This monastery is located in the hilly area of Tegeha Hamlet, Banjar Subdistrict, 22 kilometers west of Singaraja and 11 kilometers from Lovina tourist area.

Meanwhile, from the city of Denpasar, this monastery is about 100 kilometers that can be reached in approximately 2.5 – 3 hours through the Denpasar-Bedugul-Singaraja. 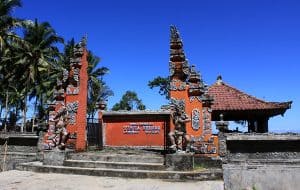 The Buddhist temple in Kalibukbuk is a relic of the 9th / 10th century. In that century Buddhism in Central Java developed during the ancient Mataram period and in the time of the king of the Sindok Empu the influence shifted to East Java. The Sindok Empress is Ciwa, but Tantrayana Buddhism is also given an influence.

Art of culture grows rapid with Empu Sindok that has a great-grandchild named Mahendradatta to which then married to a Balinese king named Warmadewa Udayana. Mahendradatta holds a Gunapriyadharmapatni which is apparently more influential in the field of religious practice than the Udayana king who is a Mahayana Buddhist. 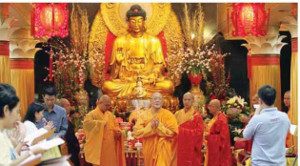 Samyag Darsana temple located in Petandakan village, Buleleng Regency and in 2014 is planned to build the Parinibbana Buddhist Altar. By 2015 the people have completed Dharmasala conservation and in 2016 have moved to the bale kulkul building.

The place is built on a form as well as efforts to foster saddha and bhakti and spirit of Buddhists in the village of Petandakan especially and Kab. Buleleng in general. The construction of this facility aims to complement the existing worship facilities between the Stupa, the Bodhi tree, and the Garden of Buddha Area.

Apart from other Buddhist temple in Bali above, there are other Budhhist temple around Bali which you may want to know. as follows:

The Buddhist temple can be made as a tourist destination due to the massive structure that they’re created in signifying the gods they worshipped. Because of this then many people will want to come and observe the beauty of arts and building in a monastery there. This does happen especially in Bali, as many foreigners will want to come here and Bali can accommodate much religious faith that can be practiced there.