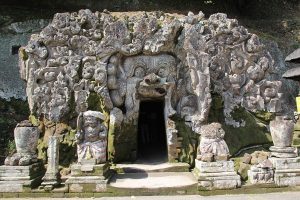 Elephant Cave or famous with Goa Gajah is one of the historical tourist destinations located in Bedulu Village, Blahbatu District, Gianyar Regency.

The distance from Denpasar to Goa Gajah is 27 Km. Goa Gajah as a Living Monument is administratively included in Banjar or Dusun Goa, Bedulu Village, Blahbatuh District, Gianyar Regency.

From the parking lot to the hermitage, tourists must descend the stairs. This place is surrounded by shady green trees, so the atmosphere is very cool and beautiful.

According to officers guarding these attractions, the trees are hundreds of years old. Ubud Elephant Cave tourism complex as a whole can be seen from the stairs. By the time you reach the lower area after descending the stairs, there will be a rushing sound of water flowing from the statue fountain. Rocks of former buildings that were once destroyed by earthquake, are also found around the shower. While Goa Gajah Giayar itself, located not far from the statue’s fountain.

Hindu Temple Goa Gajah has been known since the reign of several kings on the island of Bali, including Sri Dharmawangsa Wardhana Marakata Pangkajastano Tunggadewa (year 1022 AD), Raja Anak Wungsu (1053 AD), and Paduka Sri Maha Guru (1324 AD). The name of the temple itself actually comes from the word “Lwa Gajah”, written by “Mpu Prapanca” in 1365 AD based on the book “Kertha Gama Country”.

The site purbalaka Pura Goa Gajah was built in the 11th century, when at that time still ruled by King “Sri Bedahulu”. During the reign of King Hayam Wuruk in the era of Majapahit wrote that “Lwa Gajah” is located in Bedulu village as a hermitage place “The Bodadyaksa”.

2. The Story behind the name of Goa Gajah

The historical value contained in this cave makes this cave listed in the tentative list, by UNESCO, as a cultural heritage of the world on October 19, 1995. Goa Gajah name allegedly derived from Negarakertagama lontar book compiled by Mpu Prapanca in 1365 AD there is the word Lwa Gajah meaning river elephant. The location of this cave is surrounded by rice fields and small rivers.

These rivers then flow into the Petanu river which is in front of the temple. But some say that the name of elephant cave comes from Ganesha statue that is in the cave. The statues are like elephant trunks. While in Dawan prasati and Pandak Bandung inscription written place hermitage, which is in sanskrit language called Antakunjarapada, which means hermitage that is on the border of Air Gajah region.

Based on writing on the inscription there is a cave hermitage relation with the hermitage Kunjarakunja, India. The hermitage of Kunjarakunja is the residence of Rsi Agastya or now known as Agastya-malai. The environment at the Kaparakunja Retreat is thought to be the concept of naming the Goa Gajah hermitage.

3. The discovery of Elephant Cave

Then Dr. W.F. Stutterhiem began conducting further research in 1925. In 1950 the Archaeological Site of the Indonesian Office through a section of ancient buildings in Bali led by J.L. Krijgman conducted research and excavations in 1954 until 1979. Miraculously, they found an ancient holy water pool with six (6) female statues equipped with a chest shower.

There is a building that holds a statue of Queen Brayut or Hariti Goddess, who initially has a bad character. However, after getting a lesson of Buddhism finally the evil naturally turned into  the person full of affection and lovers of children as seen on the statue. And beside the upper right side of the cave wall, there is the inscription “Kumon” and “Shy Wangsa” written in the letter of the Kediri square, and that means that is still unknown and known by the historian.

According to archaeological research of the art form of sculpture and ancient holy water pools in Goa Gajah is believed and inherited in the 11th century AD.

Goa Gajah is a sacred place as the center of Hindu and Buddhist activities during the reign of Warmadewa dynasty from X-XIV century (400 years). Site status Goa Gajah is now a living monument serves as a place of religious activity / temple. As a place of Gajah Goa cemetery is equipped with pretend that is next to West Goa and equipped with statue of Ganesha and Trilingga.

Goa Gajahwas used by Hindhu priests as a place of hermitage or meditation. Goa Gajah hermitage is believed to be a replica of Kunjarakunja hermitage in South India, then the reliefs carved into the hermitage of Goa Gajah is the natural sculptures of the mountains.

As a place of hermitage, Goa Gajah is equipped with 15 niches that serve as a place of imprisonment by Hindu priests. This niche has a different size, a large niche of four and a small niche of 11.

5. The first construction of Elephant Cave

Elephant Cave is surrounded by rice field area to Petanu river canyon area. The atmosphere is beautiful and green. According to historical records, the tourist attractions of Goa Gajah were first discovered by Dutch scholars, Prof. Gorris and Eting in 1923. Goa is a T-shaped with a statue of Ganesha human-but elephant-headed to the left of the cave.

This statue is revered and believed to be the God of Savior and the Protector of Science. To the right of the cave there is the statue of Trilingga (Shiva, Sada Shiva, and Prama Shiva). In those days there were Hindu Shiva-Buddhist heritage.

Based on the archaeological remains and on the basis of excavation results held in 1955, it can be concluded the function of Goa Gajah as a place of hermitage and monastery for pastors to Shiva priests and Buddhist monks.

Construction began in the 10th or 11th century based on inscriptions inscribed on the eastern wall from the mouth of the cave in the form of writing the letter Kediri Kwadrat. Goa Gajah hermitage is believed to be a replica of Kunjarakunja hermitage in South India, then the reliefs carved into the hermitage of Goa Gajah is the natural sculptures of the mountains.

Those are the history of Elephant cave in Bali. It is recommended for you to visit this place . Visiting Goa Gajah would be a very interesting experience. You could not only enjoy the beauty and atmosphere of this cool and peaceful place,but also get the valuable spiritual and historical knowledge.

The History Cockfighting in Bali – Tradition