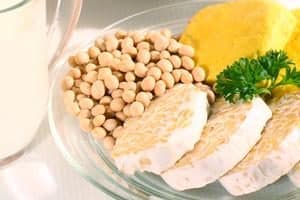 Soybean is a type of legume that is cheap but very rich in protein. It is edible and has a wide arrange of uses. The most common usage for soybean is for making soy milk and tofu where a lot of the soybeans are boiled. But there is another way of preparing soybean that is very popular. The process is fermenting the soybeans. The fermentation of soybeans originated in Indonesia.

Indonesian fermented soybeans is a staple food in Indonesia. The people in Indonesia call it tempe which may be spelled as tempeh. It is believed that tempe originated from the Java island. Tempe is often compared to tofu but those two are different in many ways. Tempe has different texture and nutritional values.

However, tempe is made from the same ingredient as tofu which is soybeans. Tempe is now becoming more famous around countries all over the world. It also serves as a substitute for meat in many vegetarian dishes. This article will tell you all about the traditional Indonesian fermented soybeans. Knowing the history and the process of making tempe may make you appreciate it more.

It is known that tempe has been around Indonesia ever since the early 1800s. At that time, there is a rise of producing tofu in Java by Chinese immigrants. The main ingredient of tofu consists of soy milk. To get the soy milk, soybeans are boiled. Only the milk is needed for tofu and so the soybeans are discarded.

When the soybeans are discarded, white fungus formed from spores. People found out that it is safe to eat the soybeans that are covered with the white fungus. It is thought that the reason for naming it tempe is because of the fermentation process. There is another traditional food with the same sound called tape that is formed through fermentation.

Tempe has high nutritional values. It is rich in fibre, protein, carbohydrate and calories. Tempe provides a good amount of calcium, magnesium, phosphorous and potassium. Another good thing about tempe is that it doesn’t have any sodium or cholesterol in it. It is rich in fatty acids of omega-3 and omega-6 too.

Studies have also shown that fermented soybeans has more health benefit than unfermented soybeans. Tempe can actually raise the iron level of the liver. This is good for people who suffers from iron deficiency.

3. The Process of Making Tempe 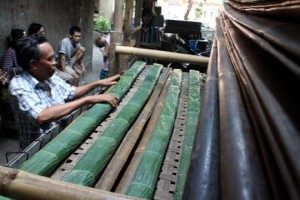 Tempe is now produced in larger amounts due to demands. However, the process is still traditional with little modifications here and there. Soybeans are still boiled until they are cooked. Some people may even mix in wheat or beans to it.

Vinegar and yeast may be added to help with the fermentation process. The soybeans are then spread out and put inside leaves. Banana leaves are commonly used to make tempe.

The reason why banana leaves are the best option is because of the tiny hairs on them. The hair on the leaves help to form mold on the soybeans. The soybeans are then left to ferment for 18 up to 36 hours in room temperature. Once the tempe is done, you can see the yellowish soybeans covered in feathery, white fungus.

Dark coloured mold may form in the tempe. But that should not worry anyone. The dark mold may form when the temperature is low or other affecting condition. The tempe is still good to eat.

For further information, This Tutorial of Tempeh Making Process in easy way. Check this out

4. How Tempe is Sold 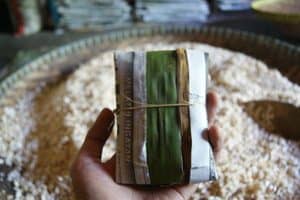 In traditional Indonesian markets, tempe is sold in the form of cakes that are already rolled inside banana leaves. The tempe cakes are rectangular in shape.

They are usually 15 to 20 centimetres long with thickness depending on the person selling them. Tempe is sold in the open air of the market. The cakes are easy to spot because of the green banana leaves.

In the supermarket, tempe is sold in refrigerated places. They are preserved in cold temperature. Instead of being left inside the banana leaves where the tempe is made, the tempe is packed inside an air tight plastic wrap. The length and the thickness may vary.

5. The Flavour of Raw Tempe

It is actually safe to eat tempe in its raw form as long as it is still fresh. The tempe is richer in proteins, vitamins and helps in the process of digestion because the enzyme it releases.

The flavour of raw tempe would most likely be nutty and beany with a slight bitterness to it. Tempe tastes very earthy with soft crunch of the soybeans. But even though tempe can be eaten raw, people like to cook it in different ways.

6. How to Know if Tempe Has Gone Bad 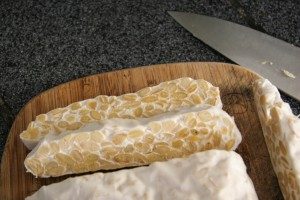 An indication of good tempe is where the soybeans are covered with the white fungus. Occasional black spot on the fuzzy, white fungus is okay. It doesn’t mean that the tempe is rotten.

The smell of tempe should be slightly nutty with a hint of ammonia but not too powerful. The tempe should also be firm and dry.

On the other hand, there are things that should serve as warning signs for when a tempe has gone bad. A bad tempe is often slimy or watery.

Bad tempe also gives off an awful smell so you’ll definitely know that you shouldn’t eat it. Moreover, the tempe would already be soft and mushy. Any odd discolouration on what is supposed to be white fungus would mean that the tempe is spoiled.

Tempe is best stored in the refrigerator. Refrigerated tempe can last around 7 days before going completely rotten. Putting away tempe in the freezer would make it last even longer. Freezing tempe can make it last for more than a month. Even though storing tempe in colder places would help preserve them, there is a crucial factor affecting the age of tempe.

If a tempe is produced inside a place that is hygienic then there is a high chance that the tempe can last for days or even longer. Following the Good Manufacturing Safety procedures would also ensure the quality of the tempe.

It’s a completely different story when a tempe is produced inside an unhygienic place. All kinds of bacteria would affect it. The tempe would only last for a day. 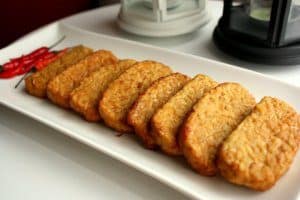 Tempe is cooked and served in varying recipes all over Indonesia. The most common serving of tempe is by deep frying it. The raw tempe is slathered with chopped onions and a little bit of salt. Once it has been marinated for a few minutes, the tempe will be fried in hot oil. The fried tempe will have a golden, crust outside. It is quite soft but still retains the crunchiness of the beans. This is a simple way to consume cooked tempe.

Other ways of cooking tempe is stir frying it with other vegetables such as peas, pepper and broccoli. Tempe can also be covered in flour before frying. The dish is called tempe mendoan. It is a favourite among many people. It can be eaten with rice but it can also be eaten on its own. You can munch on tempe mendoan as snack when you’re not that hungry.

Indonesians also like to cook the slightly rotten tempe. Rotten tempe is said to enhance the flavour of a traditional Javanese dish called sayur lodeh.

Tempe has become a useful alternative for meat to people who are vegetarians. The consistency and the thickness of tempe are suitable to turn it into a mock meat for them.

The tempe can be marinated with Barbecue sauce or ingredients to make it taste more like meat. It can later be eaten with mash potatoes. To add protein more proteins on salad, adding tempe is good for vegetarians.

Tempe can be cooked first according to one’s own preference. The cooked tempe is then cut into smaller pieces and thrown on top of the mixed vegetables of the salad. Adding cashews or sesame seeds can also be added to add more crunch. 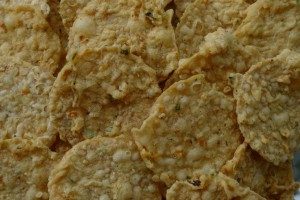 Other than the traditional cooking of tempe, people have also tried to be creative with. Tempe can be molded into patties for sandwiches or burgers. Small pieces of tempe can also be used for pizza topping.

Tempe can also be made into steaks. Just marinade it according to the flavour you like and add some black pepper sauce on top of it. Add fries and a variety of vegetables to make it more filling. Another variety of tempe cooking is turning it into crisps. Tempe crisps are made of very thinly cut tempe with some flour. The crisps come in different flavours too.

The process of making tempe may not seem that complex and complicated. But it’s the simplicity that makes tempe a special traditional food. The plain form of tempe gives people the chance to be creative when cooking it. People from all over the world can enjoy tempe in their own way. As tempe is becoming more popular, it also helps to expose people from other countries about Indonesian cuisines.