Javanese are known as the tribe with the largest population in all of Indonesia. Almost in every island in Indonesia, the Javanese must always exist. Besides being known to have a friendly personality, the Javanese also have a remarkable history of tradition and culture, just like other tribes. This is evidenced for example with the many types of dance, music, traditional houses, and ceremonies that they have. Now, we would like to explain more about the 10 traditional ceremonies of Javanese that make this tribe known around the world. 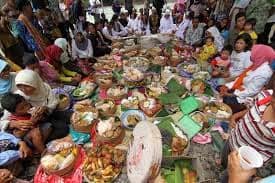 The first Javanese traditional ceremony is kenduren or selametan. This ceremony is conducted for generations as a memorial prayer led by traditional elders or religious leaders.

The existence of acculturation of Islamic and Javanese culture in the 16th century AD made this ceremony suffers a great change, the Hindu / Buddha prayer that was originally used then replaced with Islamic prayer; in addition offerings also became no longer used in this ceremony.

Based on its purpose, this Javanese traditional ceremony is divided into several types including: 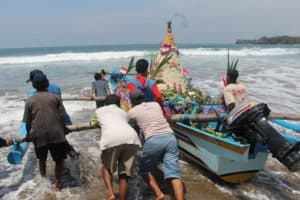 Larung sesaji ceremony is a ceremony held by Javanese living on the north and south coast of Java. The ceremony is held as a manifestation of gratitude for the catch of fish during their fishing and as a request that they always be given safety when in business. Various foodstuffs and animals that have been slaughtered will be offered or drifted to sea every 1 Muharram in this Javanese traditional ceremony. (see also: Volcanoes in Indonesia)

Local people will prepare their best offering for this ceremony as it reflects their gratitude for God’s blessing throughout a year. The offerings will be set in a tall cone shape and it is decorated with some ribbon or color paper. 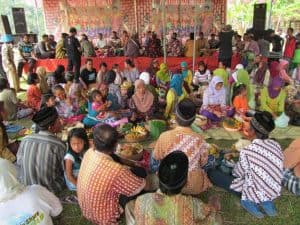 Baritan ceremony is a ceremony held to reject the plague. This tradition comes from the Indramayu area. Baritan word probably comes from the Sundanese language which means “time before sunset” between the hours of 4 p.m to 6 p.m. Baritan means stern, while burit means night, this term then used because it has to do with the time of the ceremony. (see also: History of Prambanan Temple)

Such as cholera, malaria, typhoid, vomiting and dysentery. The exact time is usually on Thursday evening or Friday night. (see also: Largest Ethnic Groups of Indonesia). Members of the community who will carry out the Baritan ceremony make rice cone equipped with side dishes. The rice cone is not a must. That is, if it is not able to provide or make rice cone can be replaced with cakes or fruits only. 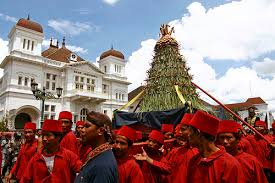 Sekaten is a Javanese traditional ceremony held in seven days as a memorial of the birthday of the Prophet Muhammad. This ceremony is originally come from Surakarta. Based on its origin, the Sekaten term is the name of ceremony that comes from the term Syahadatain, which in Islam is known as the phrase tauhid. (see also: Indonesian Floating Market)

Sekaten ceremony is done by removing the two gamelan devices from the palace keraton, namely Kyai Gunturmadu gamelan and Kyai Guntursari gamelan to be placed in front of Surakarta Grand Mosque. Every year, tourist from all over Indonesia and even from abroad come to Surakarta to witness this beautiful ceremony. 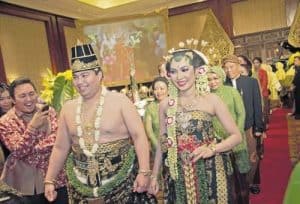 In Javanese traditional marriage is also known as a very unique and sacred marriage ceremony. This marriage tradition is very known for its unique stages that must be passed by the bride and the groom. (See also: Disaster in Indonesia)

Common people may think that these stages are very complicated. But, for the javanese these stages must not be missed because these are very important and has its own meaning.

There are several other Javanese traditions which commonly can be found still held by Javanese people. As follows:

In addition to kenduren ceremony, in Java is also known Grebeg Ceremony. This ceremony is very often held in Solo and Yogyakarta. This ceremony is held 3 times a year, which is 12 Mulud (third month), 1 Sawal (tenth month) and 10 Besar (twelfth month). The purpose of this ceremony to be held is as a form of gratitude of the kingdom towards the gift and blessings of God. (Read also: Javan Hawk – Indonesian Orangutan)

Ruwatan ceremony is a Javanese traditional ceremony performed with the purpose to purify a person of all bad luck, bad fate, and provide salvation in life. The examples of ruwatan ceremonies such as those performed in the Dieng Plateau. Children with dreadlocks who are considered to be the offspring of buto or giant should be able to quickly be purified in order to be free from all distress. (Read also: Indonesian traditional puppets – Festivals in Indonesia)

Tedak siten ceremony is a Javanese traditional ceremony held for babies 8 months old when they start learning to walk. This ceremony in some other areas is also known as a ground-breaking ceremony. The purpose of this ceremony is none other than as an expression of gratitude parents for the health of their children who have started to tread the natural surroundings. (Read also: Indonesian night markets – Indonesian national flower)

A mitoni or tingkepan ceremony is performed when a pregnant woman is 7 months old. The series of events that must be run in mitoni ceremony includes the flower bathing. After that, the mother will be prayed by the elders so that the baby survived until the delivery process is complete. This mitoni ceremony is still preserved by the Javanese wherever they are until right now. (Read also: Christmas in Indonesia – Tana Toraja Death Rituals)

Javanese people who mostly work as farmers also have their own ritual ceremony. Kebo keboan – as the name implies, is a Javanese traditional ceremony performed to reject all reinforcements and calamities on the crops they plant, so the plant can grow well and produce a satisfactory harvest. In this ceremony, 30 people dressed up like buffalo and will be paraded around the village. They will be dressed and walk like a buffalo plowing the fields. (see also: Balinese dance – Why is Indonesia Important)

There are so many Javanese traditions which represented half of Javanese culture. Therefore, Javanese people still holding on to their traditions in addition to keep their culture still exist. They proud because they have so many enchanted and unique traditions which different with other Indonesian Cultures.