10 Kinds of Snake are in Bali – Possible to be Found

In the community especially in Bali there is often an incident, in the house there are snakes. Sometimes the snake is in bed, the cupboard, even in the bathroom, and other places inside the house. Usually, the local people of Bali expels the snake by sprinkling salt around the building (house), but in fact the arrival of snakes occur constantly. Actually it can be monitored with a healthy mind / logic, that a snake is housed in a bush or in trees, but the fact it can be found inside the house. The following is some kinds of snake are in Bali. 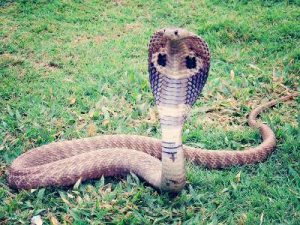 King cobra (king cobra) is known as a snake that eats poisonous snakes, such as Krait and cobra, as well as other snakes such as young python. Strange eating habits justify the scientific name of Ophiophagus hannah, the Greek word for snake-eating. King cobra is a member of the Elapidae family characterized by a fixed hollow fangs used to inject the poison into its prey.

Like some other members of this family, the king cobra is able to stretch the skin of its neck to form a kind of hood when threatened. Despite being long enough, the king cobra is known to be quite agile. This snake is considered one of the deadliest snakes in the world. The average man can die within 15 minutes when exposed to the poison. In Bali, this type of snake is found in the area of Tabanan. 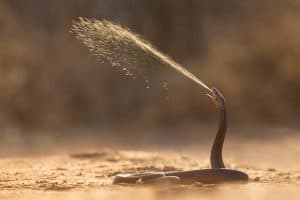 Physically, the spitting cobra is no different from the cobra in general. The body is long & the neck has a wide tassel or flap hood. The main function of the flat hood is to make the body larger when it feels threatened so that the enemies of the cobra are expected to feel fear & then retreat.

The flat veil itself is actually the bones covered by the skin where the bones can be enforced & folded as needed. The hood is also the origin of the name of the type of snake in question where the word “cobra” comes from the Portuguese “cobra capo” meaning “snake hooded” or “hooded serpent”. 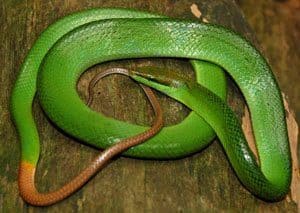 Also known as Sea Sculpture Snake, this snake is a snake often found that has adapted well so it can live in a habitat close to residential residents. This snake can be found in the lowlands only to a height of 500m, in bamboo trees, cultivated areas such as rice fields, plantations, where many piles of wood and sometimes also can be found in the park.

The body of this snake is slim, with a dull triangular head. The dorsal scales are green, the lower part is paler. The top of the snake’s head is green.His lips and around his throat can be white, yellow or pale green. His eyes were orange-yellow. The tail was brown-reddish. 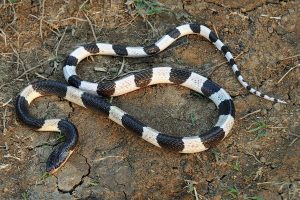 It has no elevated vertebral bone so it does not appear to have a triangular body shape. This snake has a cylindrical body with 19-31 oval-shaped ferns in white base color, the stripe does not surround the body but only on the upper part of its body, its stomach is plain white, the tail is sharp, has 7-9 stripes unlike Snake Auction shaped like a head. This snake seems to prefer to inhabit areas with flat terrain, to be found in forests, plantations and agricultural areas, commonly found at only up to 1200 m height.

This snake is usually not aggressive, especially if it is still early in the morning. They prefer to cover their heads with their tail rather than trying to bite. But this does not mean that the snake is safe to handle, this snake is one of the most venomous snakes in the world whose bites can cause a definite death to the victim. 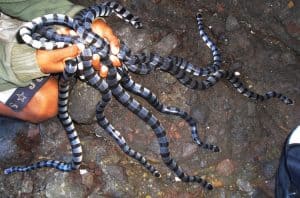 This snake has a ventral scales and cylindrical body shape typical of the land snake, a feature that is not owned by native sea snakes, it helps in exploring the land and in low trees. Just like any other sea serpent, its tail is oar-shaped, which provides rapid movement in the water. Sea Barrier Snake bristles across its entire body, this species of snake has sexual dimorphism, the female has a heavier body and is about a third longer than the male. The head and tail look similar, which serves to confuse predators so as to direct their attacks to its tail, where the wounds caused will not be so serious.

The head is small, slightly different from the body, which is gray-gray with smooth, regular spatial scales. Black dots are the same distance that circles his body and contrasts sharply with bright yellow or cream. The muzzle, upper lip and thick line above the eyes are yellow, but the remaining part of the head is black. 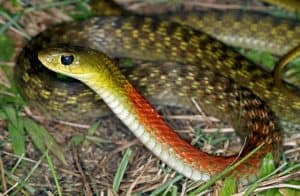 This rear-toed snake was known to be a low-venomous species like the other colubridae (formerly considered colubrid, now natricidae), but it has been known after several bite cases that the snake is venomous and can be life-threatening. With the fact that this snake is often found, thus making it more dangerous Also known as Pudak Bromo Snake, this snake is a species that is widely distributed from lowland and lowland forest to a height of about 1800 meters. This species is known by the red part of the neck resembles a picung fruit.

The snake is active during the day, as most other natricidae are more commonly found on land near small bodies of water, such as ponds, swamps and rivers, but can also be found near human habitation such as gardens and rice fields.

The Bodo pythons are usually found in forests, such as mangroves and rainforests, but can also be found in grasslands, swamps and near rivers up to 900m altitude. This snake usually inhabits the wet rocky areas near the river and the flow of water, large rotting wood, big hole, caves, and places that have many large cracks. He is an advanced climber and swimmer.

The snake is active either day or night, but is more active at night than during the day. This snake is a very strong coil. These ambush snakes vary widely, depending on the size of the snake, from small to large mammals, birds, reptiles and amphibians like frogs, but their favorite warm-blooded prey. This snake is known to prefer a drier habitat than the Batik Panca (Malayopython reticulatus). This allows the two species to coexist in their nearly identical spheres.

Java Javanese Snake is a high venomous elapid snake that is quite commonly found at low altitudes in areas disturbed by human activity to a height of 600m above sea level. Usually this snake will avoid confrontation with humans, but this snake will fight if forced by straightening up, showing “hood” and make a sizzling sound if you feel threatened. This defensive nature is more often performed by adult individuals. If the intruder does not immediately resign, then this cobra snake will spit can to his eyes, bursts can be by the snake is known on target.

This snake can live in areas close to human habitation, the ideal habitat for this snake is very diverse ranging from parks near the city, rural areas and around the gutter. This widespread and dense spread of the species shows the success of this species in adapting to habitats that have been disturbed by human activities. 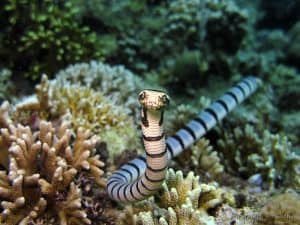 This type of Laticauda colubrina snake is a dangerous animal category because if exposed to its poison (can snake) 1.5 mg alone can be fatal, and it only takes 1-2 minutes to kill the prey. While sea snakes in general can produce can (poison) as much as 10-15 mg. Habitat this snake at a depth of about 5-10 meters below sea level, and surfaces every 5 minutes to breathe.
Habitat is spread over tropical oceans, especially in the Indian Ocean and Pacific Oceans.

Amphibious so that in addition to living in the sea water is also able to move inland as long as the scales on the ventral body. Has a fang that is in front (proteroglypha). The color is black and white stripes. When exposed to sunlight, it will emit blue and purple. The tail is flat like a catfish tail and a small round head. 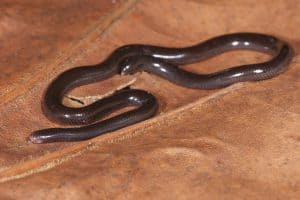 Can be found in a wide variety of habitats, this widespread and small snake is a species that has many populations but is rarely seen, as it spends most of its life digging under the soil and leafy leaves. They can be easily found while digging the ground, turning stones or wood to a height of 1640 meters above sea level. They can also be found after heavy rains occur where they are forced to rise to the surface.

This snake’s prey is an ant and termite larva. When feeling threatened, this snake will try to stick its tail on the ground and shake his body to repel the intruders. Sometimes he will also direct the tip of the tail to try to stab the intruder who produces a puncture that does not hurt at all. The body of this snake is dark brown to black throughout his body. His head was very similar to his body, his eyes very small and looked like black dots.

Those are the kinds of snakes are in Bali. While you stay in the hotel near the beach or garden, be careful of seeing this kind the creature. Don’t be panic when you see this creature. If it is possible, don’t be aggressive if you don’t want to be hurt by this animal.

Kinds of Monkeys are in Bali You will Find