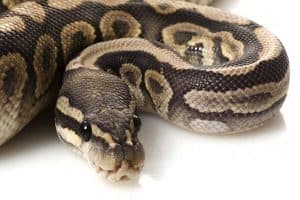 You must already heard about this gigantic snake. This gigantic yet fenomenal snake is called Phyton. Phyton is a type of snake from the Pythonidae tribe that is large and has the longest body size among other snakes. (See Also : Endangered Animals in Indonesia – History of Chinese in Indonesia)

Its largest size is said to exceed 8.5 meters and is the longest snake in the world. Longer than anaconda (Eunectes), the largest and longest snake in South America.  However there are other names of the pythons such as Snake rice fields; Rice-n-etem (Simeulue); Snake petola (Ambon); and in English called reticulated python or often abbreviated as retics. (see also: Javan Leopard Facts – Javan Hawk).

While its previous scientific name is Python reticulatus, it has now changed its genus into Malayopython reticulatus. (See Also : Most Beautiful Fabric in Indonesia – Native Plants of Indonesia) 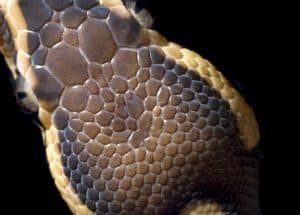 These pythons are easily recognizable because they are generally large. The pyhton family (Pythonidae) is relatively easy to distinguish from other snakes by looking at its dorsal scales of more than 45 rows, and its ventral scales narrower than the width of its lower sides. (see also: Sumatran Tigers – Endangered Sumatran Elephants)

Both spread from Asia to Great Sunda, including Java. P. molurus has different developmental patterns of reticulatus, especially in the presence of large dark V patterns over its head.  The pythons have a pattern of net-shaped circles (reticula, mesh), composed of black, brownish, yellow and white colors along the dorsal side of the body. A thin black line runs overhead from muzzle to nape, resembling the center line that bisects the right and left of the head symmetrically. (See also : Indonesian Women Rights – Merak Bird)

Dorsal scales (backs) are arranged in 70-80 series; The ventral scales (stomach) as much as 297-332 pieces, from the bottom of the neck to the anus; Subkaudal scales (bottom side of the tail) 75-102 pairs. The rostral shield (the scales at the tip of the muzzle) and the four topical supralabial shields have a heat sensor pits (Tweedie 1983). (See also : Indonesian Writers – Sumatran Tigers Conservation) 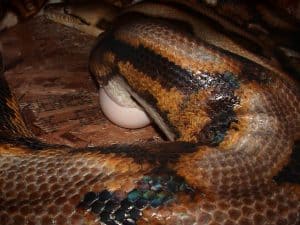 The pythons are included as long-lived snakes, up to 25 years. Female snakes have larger bodies. If the male has begun to mate at a body length of about 7-9 feet, the new female is at a length of about 11 feet. Adult sex is achieved at age between 2-4 years.  (See also : Why is Indonesia Important)

The mating season runs from September to March in Asia. Reduction of the length of daylight and decrease in air temperature are the driving factors that stimulate the breeding season. However, this season may vary from one place to another. Shine et al 1999 found that pythons around Palembang, South Sumatra, lay eggs between September to October. While in the vicinity of Medan, North Sumatra between April-May. (See also : Table Manners in Indonesia)

Both males and females will fast in the breeding season, so body size is important here. Females will even continue the fast until laying eggs, and very likely also until the eggs hatch. The python lays between 10 to about 100 eggs. These eggs are ‘incubated’ at a temperature of 88-90 ° F (31-32 ° C) for 80-90 days, even more than 100 days. Female snakes will circle these eggs while contracting, this muscle movement of contraction causes heat which will increase egg temperature a few degrees above ambient temperature. (See also : Deforestation in Indonesia) 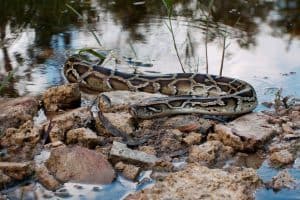 The pythons live in the humid tropical forests. This snake relies on the availability of water, so often found not far from water areas such as rivers, ponds and swamps. The main food is small mammals, birds and other reptiles such as lizards. Small snakes feed on frogs, lizards and fish. (see also: Indonesian Beliefs and Values)

Large snakes reportedly prey on dogs, monkeys, wild pigs, deer, and even ‘lost’ humans waiting for prey. This snake prefers to wait rather than actively hunt, perhaps because of its large size consumes a lot of energy. (See also : Largest Cities in Indonesia)

The prey is paralyzed by twisting it tightly (constricting) until it is out of breath. Some bones in the chest and pelvic glands may be fractured by this. Then after the death, the prey swallowed whole from the head. (see also: Rafflesia Arnoldii Flower)

After eating, especially after swallowing large prey, the snake will fast for several days to several months until he is hungry again. A python that was kept at Regent’s Park in 1926 refused to eat for 23 months, but after that he was normal again. (See also : Unique Facts about Indonesia)

The most recent Phylogenetic research has found astonishing results, that the pythons and the Timorese pythons are closer to the Australasian Python than to the other genuine python genus. So, the pythons and Timorese pythons are included in the new genus, Broghammerus. However, in 2013-2014, scientists conducted DNA studies again until finally the two snakes were included in the new genus again, namely Malayopython. (See also : Hinduism in Bali) 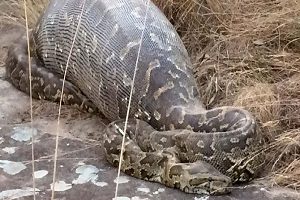 Of course, there are many human casualties caused by the attack of this snake, but the most recent is the story of Salibiro Akbar from West Sulawesi. The man who works as a farmer was killed by snakes pythons while harvesting palm. Snakes that eat Akbar is called a monster by foreign media. ( See also : Traditions in Bali)

The incident occurred when the victim went to his garden to harvest the palms in Salubiro Village. Locals who are looking for Akbar, who do not go home then find a python in a state of enlarged abdominal with the suspicion of preying on Akbar. After that, the residents must skin the snake to remove Akbar from the snake’s stomach. (See also : Ngaben in Bali – Indonesian National Flower)

Local residents suspect that Akbar harvested the palm and then the python attacks him from behing, so the victim is helpless and swallowed by a snake that has four meters long. Apparently, this incident was also in the spotlight of a number of foreign media. Not just simply preach, some of them also ask a number of observers to find out why the snake eat humans. (See also : Bali Tribes – Edelweiss Flower Facts)

TV station from the United States, NBCS News published a report about the fate that befell Akbar. The report is titled, “The body of an Indonesian man is reported to be found in the python body.”. Meanwhile, the British media, The Sun published it under the title “The Indonesian man’s body was swallowed entirely by a 7-meter-long python monster whose stomachs were cut off by frightened villagers.” (See also : Bali Facts – Customs of Indonesia)

Not just spreading warning, this media also inserted video pieces when villagers are cutting the abdomen of the snake. At the beginning of the clip, The Sun warned the readers about the recording that is considered disturbing. The same thing is done by the Australian media, news.com.au. The video snippet was also put into the news, and was titled “The video trail shows the horrible moments of missing people being cut out of the giant python’s body.”(See also : Buddhism in Indonesia)

Finally, that’s it, all you need to know about Python in Indonesia . Okay, enjoy it and have a great day !