Who doesn’t enjoy the sight of waterfalls? The rushing water that make their way down from the cliffs and rocks is a sight not to be missed in Bali. Sure, Bali is known for its night clubs and beaches. But connect yourself with its natural wonders by visiting one of the 13 Most Famous Waterfall in Bali. You can go solo or share the unforgettable experience with your friends and family. 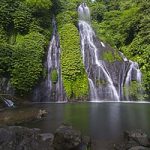 The Banyumala Twin waterfall is most famous for its beauty. It’s quite far as it’s located close to the mountains in northern Bali.

Lush plants and trees surround the two waterfalls. The atmosphere is serene and breath taking. The only sound you’ll hear is the rush of the water flowing down from the rocks.

Take a plunge into the pool at the bottom of the waterfall to make the most of your experience. You can have a bit of privacy here as the place is not crowded with a lot of tourists. 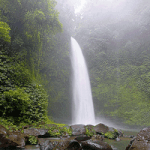 It takes work to get here but the spectacular view is absolutely worth it. NungNung waterfall is located in a village that’s around 45 kilometres away from Denpasar.

Once you reach the village, you will have to pay for a ticket. There’s a car park available if you bring your own vehicle. 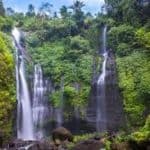 The word sekumpul means ‘a group’ in English. There are in fact 7 waterfalls that you can see from varying altitudes at Sekumpul waterfall.

The journey to the village where this waterfall lies is easy. It’s only a 2 hour drive away from Denpasar. The challenge begins as you make your way up see the waterfall.

It’s muddy, slippery and you have to cross a river. A well planned preparation is a must. You can ask the friendly locals around you for direction in case you ever get lost.

Read more: Activities to Do in Bali 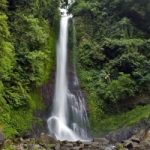 The next most famous waterfall in Bali is the GitGit waterfall. For beginners or those who want something that won’t take too much time then this is the perfect place for you.

However, it’s popularity would mean that it tends to get crowded. Still, the view of the waterfall is a great one.

There are plantations around the waterfall along with some wild monkeys. Cafes and small shops selling arts or souvenirs can be found close to the GitGit waterfall. 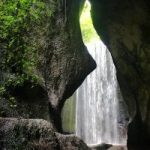 Tukad Cepung waterfall is not often visited by people though it’s still popular. The way to get there can be difficult. Its location is also quite isolated even though it’s in a village.

To reach the waterfall, you must walk down a stair. Once inside, you may feel as if you’re inside a cave. It’s actually tall cliffs surrounding the waterfall. The nature around the waterfall is peaceful and green.

You must take extra precautions if you come during the rainy season. The water level may rise and you need to get out immediately. 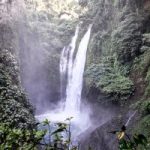 AlingAling waterfall is located in the Sambangan village. Reaching the waterfall can be tiresome.

You have to walk a long distance across the paddy fields. The AlingAling waterfall is 35 metres tall with two streams running down the rocks. You can swim in the pool underneath the waterfall.

Some people have gone down one of the streams since it resembles a waterslide. Before you do so, take your safety into consideration as you might get hurt. But if it’s an adrenaline rush you’re seeking then go right ahead! 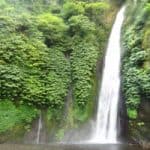 This particular waterfall is famously hailed as the ‘Niagara Falls of Bali’. It’s accessible for both adults and children. Take your family out here for a special visit to Bali’s nature.

The walk down to the waterfall is easy but walking up can get tiring so take it slow. Munduk waterfall is around 15 metres high.

Expect yourself to get a bit sprayed by the water as you make your way around the waterfall. There are restaurants and small cafes where you can take a break or get some things to eat. 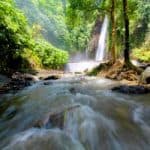 There are no clear signage to guide you to the waterfall so you rely on the sound of the water. There will be a steep stair with a lot of steps that you have to go through to see the waterfall up close.

It’s advised to avoid visiting this place during the rainy season. The water would not look as stunning as usual because it will change to a brownish colour. 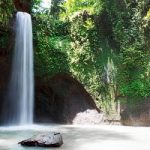 The Tibumana waterfall can be found in Apuan village. This waterfall is also one of the most famous ones in Bali.

There are actually two streams of water that run down the rocks when the amount of water is high. Behind the curtain of fast-moving water, there is actually a cave.

The locals say that they believe it’s a way to reach the temple of one of the Balinese gods, Raja Besakih. Tibumana waterfall offers a serene atmosphere as it’s surrounded with greeneries, wild birds and butterflies. 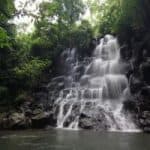 The Kanto Lampo waterfall is gaining so much popularity among tourists due to its easy access. It’s a great place to experience and you can take mesmerising pictures while you’re there.

The water from the waterfall falls through different layers of rocks. This makes for a great view, as if you’ve found a waterfall inside a jungle.

If you’re a daring person, you can walk between the rocks to feel the water fall on you. However, don’t do this for too long as the water pressure is very high. 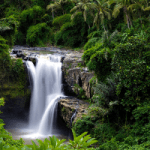 Tegenungan waterfall is one of the waterfalls in Bali that is not located anywhere close with mountains. It’s completely reachable as it’s located in a village in Ubud.

But you still have to walk down hundreds of steps to make it to the waterfall. The water from Tegenungan is clean, fresh and cool.

It makes you want to dive into the pool immediately. Some other things that make Tegenungan waterfall so famous is that it’s closely located near temples and the Ubud Monkey Forest.

Also read: Kinds of Monkeys are in Bali 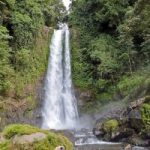 The Yeh Mampeh waterfall is one of the highest waterfall in Bali. It lies in a remote village named Les.

There are signs that will lead you to the waterfall so you don’t have to worry about getting lost. Even though Yeh Mampeh is famous, you won’t really find any crowds there.

To spend more time admiring the beauty of the waterfall, you can actually book a room at the nearby homestay there. You can eat local cuisines and get a great massage at the presence of Yeh Mampeh. 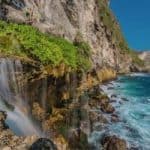 Last but not least is the Peguyangan waterfall in Nusa Penida. This waterfall is unlike the other waterfalls we’ve shown you.

It’s actually short but the cascading water make for a beautiful scenery. The water flows down into the sea. That’s right, it’s located right next to the ocean.

You can take a dip at one of the water pool that acts like an infinity pool but with the ocean as the view. It’s better to get a guide to lead you on the right way to the Peguyangan waterfall.

A good thing to remember is to always be on the lookout for scams as they can be very common in these places. You don’t want to ruin your trip to one of these amazing waterfalls in Bali.

13 Reasons to Invest in Indonesia