Home » Place » Volcano » The List of 10 Mountains in Bali Indonesia

Mounts in Bali as well as volcanoes, the island of Bali in addition as a tourist destination that has a beautiful beach and unique culture, the island of gods also has a row of mountains and also an active volcano. Mountains and volcanoes on the island of Bali are also widely known by local mountain climbers as well as international climbers as a favorite place to hike and trekking when they vacation in Bali. Here is the list of mountains in Bali that you should know.

The mount of Agung Is the highest mountain in Bali with an altitude of 3,031 meters above sea level, Mount Agung is located in the district Rendang, Karangasem district, Bali. Geologically, Mount Agung is an active stratovolcano, and has had a major eruption in the past, the most significant being in 1963. But by 2017 the Great Mountain erupted again. Inevitably, this mount is also attracted the attention of netizens from over the world due to the eruption in 2017, especially for friends who are accustomed to explore Bali as a favorite destination.

Each year Mount Agung is visited by approximately 800 people. In the past year for example, about 800-1000 climbers including locals came to fulfill their curiosity towards Mount Agung. As for the foreign climber is very diverse, ranging from France, Germany, Malaysia, Netherlands, India, Singapore, and China.

Mount Batur is a small stratovolcano in the north-central island of Bali located in Bangli District. Batur has a height of 1.717 meters and has several craters. Mount Batur is located in a large caldera. There are remnants of a terrible eruption in prehistoric times of a volcano that once had a height of more than 4,000 meters.

Batur is a volcano that still remains active to this day and has been recorded erupting more than 20 times in the last two centuries. Major eruptions occurred in 1917, 1926 and 1963 (the same year as the great eruption of Mount Agung), making Mount Batur the most active volcano on the island of Bali. Mount of Batur is a popular place to hike among tourists and become a favorite tourist spot for trekking in Bali. Batur is also very popular for sunrise trekking.

The height of mount Abang is 2,152 meters above sea level. It is the highest point on the Batur caldera rim, the third highest in Bali, located in Bangli and Abang districts located east of Lake Batur. The Mount of Abang is actually the original part of Mount Batur. However, after this volcano which has 4,000 meters height was erupted in prehistoric times, it was left nothing but a large caldera and a small cone. The Abang Mountain are is a popular peak among adventurous mountain climbers, though not difficult to climb, but a very beautiful view of Mt. Batur and Lake Batur can be seen from the top of Abang Mountain. 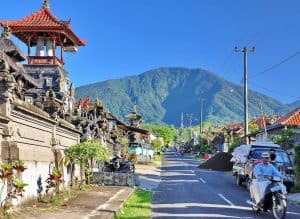 Mount Batukaru also spelled Batukau or Watukaru is the second highest mountain in Bali with an altitude of 2,276 meters, located in Tabanan regency. Batukaru is derived from the Balinese word “Batu / Watu” means “stone”, and “Karu / Kau” means “shell / coconut shell” in Balinese. Batukaru is the highest peak in the Bedugul volcanic area but is inactive until now. Mount Batukaru is also purified by the Balinese Hindu community, and has a shrine on the southern slope of Pura Luhur Batukaru. Batukaru is relatively unpopular for climbers to climb as it is covered with dense forest that limits the view. Batukaru has a large crater, the largest in Bali, but this crater opens at the southern end where the Yeh Mawa river to flow. 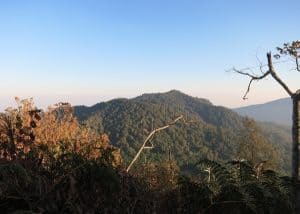 It has 1909 meters height which recommended for trekking. Mount Tapak presents beauty and damage on both sides. The southern slope (beautiful side) stands the famous Eka Karya Botanical Garden. All well maintained, colorful flowers, verdant grass and pine grown in uniform distances. The north side is the grim side. The villa was built until it cleared the Dasong Forest, the growing area of cultivation nearing the peak, as well as all the slopes already encapsulated. Landslides have killed several people on this mountain. This disaster occurred in the rainy season 2011. Near this Lake Buyan there is no less water to reach the residential population almost every year.

Located in the area Bedugul, Mount Chess or more often called Mount Catu, became one of the mountains that are often explored by tourists. Mount Catur is the 4th highest mountain in Bali. By the citizens of Bali, Mount Catur better known as Pucak Mangu. Having a height of 2096 meters above sea level, you can reach the summit of Mount Catur for approximately 2.5 hours. At the peak, you can all travel to Pura Pucak Mangu which is a legacy of the Kingdom of Mengwi.
The peak of Mount Catur is often referred to as the peak of mangu or pucak mangu, this is dikarekan at the top of this mountain there is a temple called pura pucak mangu. Until now this temple is still functioned as a traditional ceremony and also a place of prayer for local residents. 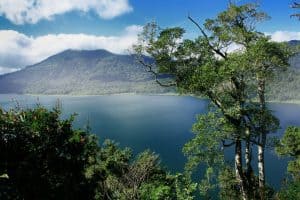 It is located at the south of Lake Tamblingan. Mount of Lesung also becomes one of interesting object for climbing. Although the height is only 1865 meters above the sea level, you can still enjoy the sensation of climbing on this mountain. At some points of this mountain we will find old statues complete with its rituals. This mountain has a large crater. There is a myth that says that at the bottom of the crater live herds of deer. Track to the top of the mountain is a fairly moist vegetation area. Like some mountains before, at the top of Mount Lesung we will also find a temple. This mountain climbing path is Tamblingan village.

Mount Pohen is an inactive stratovolcano in Bedugul area. It is located in the southwest of Bedugul. Based on the data, it has a height of 2.063 meters up above the sea level which makes it the sixth highest mountain in Bali. Mount Pohen, is one of three mountain series in Bedugul area, namely Pohen, Tapak and Lesung This mountain is included in the conservation forest area and is surrounded by Site Geothermal. The weather is so very erratic there is no official path to reach the peak.Vegetasi on Mount Pohen is also very tight. In addition, there are many dangerous animals and insects here. Therefore, this mountain is not recommended for climbing. 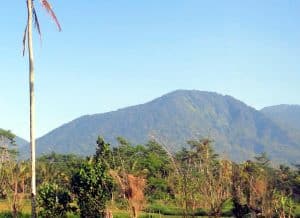 Mount Adeng is one of UNESCO World Heritage because of Subak watering system applied in Angsri Village. Subak watering system itself is quite popular and a characteristic that exists on the island of Bali. In the southern part of the mountain slope there is Pura Pucak Adeng which has the main building in the form of punden staircase that comes from the lava pad. And there are several phalluses at the top.
The temple terrace buildings follow the shape of the mountain body. For the climbing route to Puncak Adeng itself can be through Pura Pucak Adeng located at an altitude of 1200 mdpl and then proceed to Pucak Anyar and follow the path setapakn which is on the right punden.

Mount Sanghyang also called Sengjang or Sengayang is an inactive stratovolcano in the Bedugul volcanic region. Its total height is 2.087 meters above sea level. It is located in Tabanan Regency and becomes the sixth highest mountain in Bali. Sanghyang is almost completely ignored by climbers because of the isolated situation in the northern part of Mount Batukaru, west of Mount Adeng and Mount Pohen, and to the south of Mount Lesung. The last time Sanghyang volcano erupted in 2014. However some tourists still love to visit the slope of this mountain to take some pictures.
Those are the names of Mountain located in Bali. Bali is the pretty perfect island to become the destination since it provides the complete landscape. Whenever you go to Bali, it is recommended to do trekking in one of the mountains in Bali.