15 Most Popular Festival in Indonesia Worth Experiencing

Indonesia are known from its richness of people and cultures. We live in a diverse circumstances with more than 1340 tribes that speaks more than 652 languages. That facts has proven us that this country is wealthy in culture. There are such as Sundanese, Javanese, Betawie, Tengger, Osing, Badui, Maduranese and so on that share the same living spaces with another tribe while living in peace as written in Indonesian motto: “Bhinneka Tunggal Ika” or Unity in Diversity when translated.

Each of its tribe has different custom with unique ceremonial (or festival) that will be held according to their own purposes. Tourists from around the world always fascinated by its festival once they saw it, and keep coming back for more to see another famous festivals in Indonesia from another tribe or region. Mostly they come as photographers who like to capture festive moments, philosophers that like to swim deep into people and cultures, litterateurs who loves Indonesian languages, or simply come because they enjoy and want to experience Indonesian meals, people, nature, and of course culture itself, deeper.

Here, we will talk further about most popular festivals in Indonesia that you should try to attend at least once in your life. 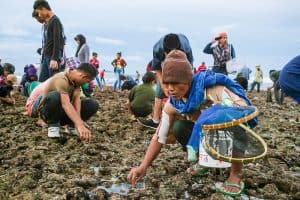 Bau Nyale is a really unique festival because it has a folklore background story which is Putri Mandalika Folklore. This folklore tells us about a life story of Princess Mandalika, a beautiful and righteous woman, who happened to be contested among princess. But unfortunately, something terrible had to happen.

Princess Mandalika decided to make way with oneself because she didn’t want to be fought over them. And now, the appearance of a greenish colored sea worms are believed to be the incarnation of Princess Mandalika herself.

After finished, sea worms that we caught earlier can be consumed as pepes, rempeyek, and other dishes which believed to bring advantages and luck for us who consume it. Besides bau nyale festival, there are lots of other festival in Lombok such as Leather Puppet Sasak Performance, NTB Student Art Performance, and National Festival of Traditional Musician.

Yadnya Kasada is one of the cultural ceremony held by a tribe that has been living in foot of Mount Bromo, Tengger Tribe.

All tribes that lives in foot of mountains from around Indonesia will gather in Mount Bromo to give tribute to Sang HyangWidhi, God Almighty, Roro Anteng, daughter of King Majapahit, and Joko Seger, son of Brahmana. You may want to read about Moral Values in Indonesia

They usually sacrifice several chickens, goat, and vegetables from their fields by throwing it away from the top of the mountain to its crater. This is symbolize of their gratitude and thankfulness of what they had from the Almighty, and they do it annually every 14th day of Kasada month in Hinduism calendar (around June).

Besides seeing their annual ceremony, Mount Bromo also has something nice to offer which is its natural beautiful scenery and sunrise. CNN GO listed Mount Bromo as one of 50 Natural Wonders: The Ultimate List of Scenic Splendor. 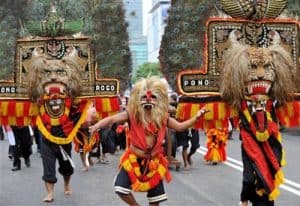 In 2007, UNESCO has recognized Reog as one of the world cultural heritage that deserves to be conserved together. Reog Ponorogo Dance is Indonesian cultural art show that uses big kind of mask made uniquely in Ponorogo.

Now, for every year near Suro month (or Muharam month in Islam), people from Ponorogo, East Java will held Reog Ponorogo Festival. This festival become a 5 days gathering event for reog artists around Indonesia such as Surabaya, Madiun, Malang, Kediri, and other areas to perform the best show of reog and win the President’s Trophy.

They will perform in a big with international standards stages and being judged for their exciting choreography, dancing skills and cohesive staging act. International and national journalists and photographers never missed documenting this majestic festival. 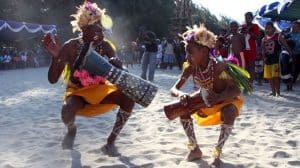 Asmat tribe is one of the tribe in Papua. Since 1980ish they annually held Asmat Cultural Festival to maintain its cultural heritage existence and to share its unique culture to the world as UNESCO already acclaimed them to be one of the UNESCO World Heritage Sites.

This festival regularly held in Oktober. There are several activities to see when you decided to see this festival such as among others featuring dance and music performances, sculpture auctions, carving making demos, boat races, and the election of Asmat ambassadors.

We can also gain new insight about their people and culture more related to spiritual artistic sides of their work and tradition. Then you may want to read about Fascinating Facts about Papua Indonesia 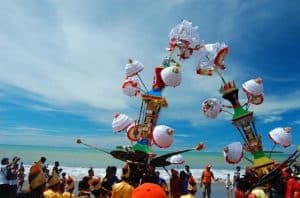 Tabuik is a ceremonial service of Prophet Muhammad SAW’s grandson, Husein bin Ali, that regularly held in Gandoriah Beach, Pariaman. A lot of people come to celebrate this festival every 10th Muharam in Islamic calendar.

Tabuik Festival is symbolized by a horse with human head and wings called “buraq” and “tabut” or wooden coffin. This buraq is symbolized with wooden coffin on its back because there is that one story that tell us as if buraq has helped to deliver Husein’s body to the hereafter. And Pariaman people ordinarily make some artificial buraq art to remember this story on Tabuik festival. 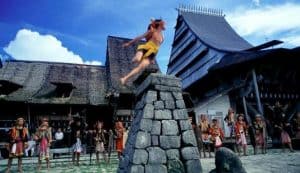 Nias culture are famous for its ancient megaliths history and culture that still managed to be guarded and preserved. One of them is jumping a very high stone that this tradition even printed earlier in Indonesian banknote. 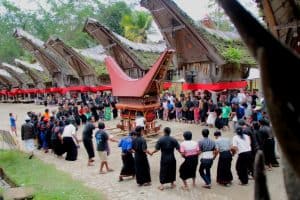 Rambu Solo is actually a death ceremonial feast that famous for its expensiveness. Held between August and October, this feast will spend moths full of rituals. You may want to read about Tana Toraja Death Rituals

The most unique one is when the executioner cutting down 25-100 buffalos with only one cut.

Once its failed, we have to do it all over again from the beginning and adding more buffalos to the rituals. We will be served many various meals from Toraja to try afterwards. 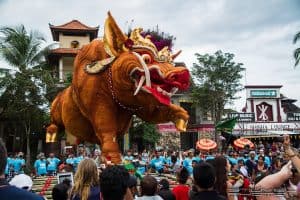 Ogoh-ogoh festival is held a day before Nyepi Day for Hinduism people. They will make parade around their level of areas starts from family, district, city, to provincial level carrying “ogoh-ogoh” as a symbolized of Hinduism negative sides of being human. You may want to read about Cultural Norms in Bali

They will spread tawur rice and spreading incense smoke or torch while making some noises along the streets. And this becomes another charm of Bali to see. Besides, there are still other festival in Bali Island you curious to know about : 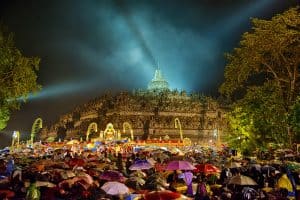 In the morning, thousands of monk will be collecting meals to be made as an offerings and in the afternoon they will be walking to the temple bringing up the meals while reciting the holy prayer with all of the Hindu people. You may want to read about Largest Temple in Indonesia

Then, in the night time tourist will be able to attend the lovely and eminent lampion flying rituals together. And after that, Hindu people will continue to prayer until dawn and sunrises to finish the series of rituals. A lot of international tourists love to attend and get a really nice shots and insights from this festival.

Another Festival in Indonesia

After reading 15 Most Popular Festival in Indonesia, which ones of those Indonesian cultural festival that get your attention or the most unique for you? If you have fully interested in people and their cultural behavior, you have to come visit and see them yourself.

Beside what I explained, here i give you reog performance in South Korea, check this out,

We bet you won’t regret your decision to travel because aside from its richness in culture, Indonesian people are also famous for their kindness and friendliness.

So, what are we waiting for? Experience Indonesia’s beauty and get lost in them!