Indonesia is an archipelagic country which composed of thousand islands, 2/3 parts of Indonesia are waters area. No wonder that Indonesia is rich with marine life, Indonesia has so many beautiful coral reefs area as as a place for the fish to live. However the population of Indonesian fish is getting rare. Below are the list of Indonesian distinctive fishes which are getting rare in Indonesia. 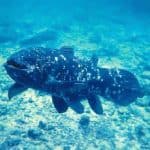 Coelacanth is identified to have approximately 120 species. this ancient fish have been declared extinct since fifty sixty five million years ago.

Surprisingly this fish was found alive in 1938. The local fisherman found this fish in the Comoros Island.  Not only that, this fish was caught in the fishing net in the Manado Tua waters, North Sulawesi.

Due to its excellency, the local people called this fish as “sea king fish”. This fish is categorized as an ancient fish in North Sulawesi. 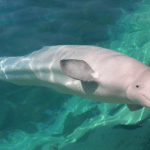 The species of this ancient fish can only be fund in 3 locations which is Mekong River, Irawady River, and Mahakam River.

This ancient fish is ranked first as the rarest fish in Indonesia. It is said that there are only fifty of Orcaella brevirostis in Mahakam River, the data is take based on the research that is conducted in 2007.

Not only in Indonesia, the population of this fish in either Mekong or Irrawady Rivers are becoming extinct. This fish is also called as freshwater dolphin because its shape looks like dolphins; it has a relatively flat muzzle shape. 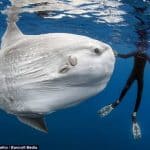 Sun Fish or Mola-Mola Ramsayi is very photogenic so this ancient fish is a popular fish among the photographers, divers, and jug drivers.

However you cannot see Mola-Mola fish anytime, this fish can only be seen on July until September. This ancient fish lives in tropical and sub-tropical seas.

The adult sun fish are very heavy, it ca weigh one to two tons and its length can reach one meter long. This ancient fish is unique because it has no fin on the tail part. Instead, this fish has clavus to connect the dorsal fin and the abdominal fin. 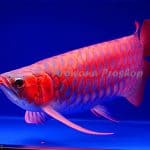 Asian arwana fish is categorized as a rare fish species, it even considered as an endangered species in 2004 by the IUCN. The population of this fish is continue to decreasing because its habitat is destroyed and this species are getting traded. Asian arwana fish has silverish color and it is nominated as Southeast Asian native fish.

This fish is divided into four variants based on its color; the colors are  green, red, gold with red tail and gold. Asian green colored fish are found in Indonesia, Thailand, Malaysia, Vietnam and Myanmar. 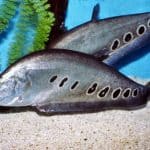 Lopis fish is very popular in Indonesia. Indonesian local people call this fish Belida fish because the species of this fish live in Belida River in South Sumatera area.

You can find this species at other regions such as Java, Kalimantan, Sumatra and the Malay peninsula.

As we know, many rivers in Indonesia are damaged today so that the population of this fish is rare as well. Belida fish is a type of fish from the turtle fish backbone (Notoppteridae). The seeds of Belida fish are cultivated by Mandyanain Freshwater Cultivation Center, South Kalimantan until 2005. 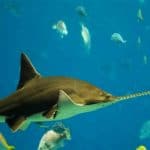 Sentani shark is a popular shark from Papua. It is named after Sentani because the population lives in Sentani Lake, Papua. This endemic shark has teeth shaped like saw.

The foreigners called this fish as  “Largetooth Jawfish” which means large toothed sharks. Same like the other fishes mentioned above, Sentani Shark is also rare.

IUCN categorized Sentani Shark as an endangered animals. Due to habitat depletion and illegal hunting, the population of this shark is rare. 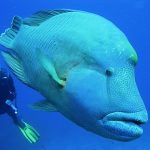 Research conducted by IUCN 2005 in North Sulawesi, NTT, Bali and Raja Ampat, shows that this fish were getting so much pressure (targeted to be catch) so that its population decreased and very rare.

Napoleon was included in the IUCN (Endangered / Endangered) red list in 2004 and the CITES II appendix in 2005. 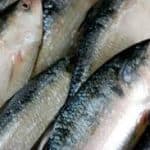 This ancient fish comes from Riau especially in Bengkalis District. According to the researchers, the population of this fish decreased and this fish is endangered to extinct.

Besides in Bengkalis, this fish can also be found in Sarawak Malaysia, Mekong River Vietnam, China, Bangladesh to the Arabian Sea. This fish has a unique lifestyle.

As migratory fish,  big fish are in the sea. But when spawning, these fish move to the estuary. After the age of 30 days, these fish will go to the sea and back to the estuary as their mother did. Fish terubuk also include hermaphrodite type. After six months, all the fish begin to change into females.

Indonesia is very rich with marine biodiversity however nowadays the waters in Indonesia are polluted, contaminated, and destroyed. Those are the main reasons why the fishes listed above are getting rare. Besides, fishes are also targeted for trading purposes. Indonesian local government has been trying several ways to conservate the remaining speciess so they will not be extinct.