Many people are hoping that Indonesia’s traditional sport will go mainstream worldwide. It’d make every Indonesian proud if one day their original game of the country is regularly contested in world stages like soccer or basketball. Thus, it can become the momentum to introduce Indonesian sport while also trying to preserve it.

below is the list of traditional sports in Indonesia: 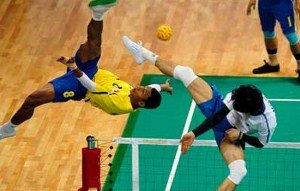 This is a sport that’s played in a way like playing football and volleyball but is done on the badminton court. This sport originated from the time of the Sultanate of Malacca (1402-1511). The number of players in a game is three for each team.

Footballers takraw should not touch the ball by hand, and should only use their feet so that the glimpses of the movements in the game sepak takraw are similar to martial arts movements. This sport has long been ‘contested’ or claimed by various countries ranging from Malaysia, Laos, Philippines, to Thailand. Although strong evidence from historians can prove that sepak takraw is a traditional sport originating from South Sulawesi, it would be meaningless if we as the people of Indonesia do not defend it and preserve it. 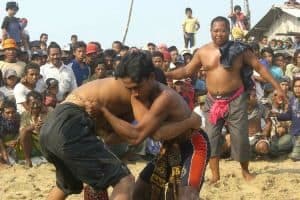 Pathol is a traditional wrestling sport originating from Sarang District, Rembang Regency, Central Java. It is said that the game Pathol has existed since the time of Majapahit, which was originally a contest event to find the best knights that could keep the port of Tuban which at that time was crowded by pirates and rogues soldiers.

Pathol movements are then adapted and developed by youth and local communities until it eventually grows into a sport that is popular and even made into traditional art. Pathol wrestling is generally held on the coast and often held every minute or in the full moon and on special days 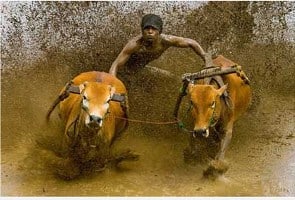 Karapan Sapi is a cow race sport originating from Madura. In this one game, a pair of cows is exercised by pulling some kind of wooden wagon through the 100-meter track. Cow jockeys only need to stand on wooden carts and control the rate of their cows so as not to shake uncontrollably. But do not be mistaken that jockeys karapan cow is a simple job because it takes practice and special skills.

Karapan sapi has now become a party of people’s folk who can draw thousands of visitors from local and abroad. Every end of September or October they even held the biggest cow karapan game that competed for the rotating trophy of the President. Unfortunately behind this festivity are often found violations of participants who often treat their cows with cruelty to run faster. This habit is of course very deviated from the original value and should be followed up firmly by the organizers. 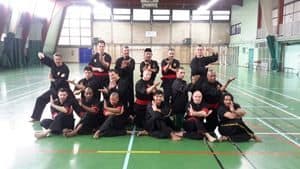 Indonesia Pencak Silat is part of the culture of Indonesian society that has developed since colonial time. Pencak silat is rooted in Malay culture and has been widely known in various countries such as Malaysia, Brunei, and Singapore. Pencak silat in Indonesia is not just one kind only. Many sports version of pencak silat that develops in accordance with the cultural values of local communities.

For example, martial arts of Cimande type which is said to begin from the story of a woman who witnessed the fight between the tiger and the ape, and then imitates the movement of the two animals.

There is also a type of silat derived from the realm of Minang, created by Datuk Suri Diraja from Pariangan Tanah Datar in the XI century. The parent organization of pencak silat in Indonesia today is the Indonesian Pencak Silat Association (IPSI). 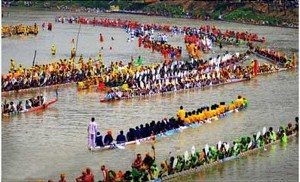 Pacu Jalur is a type of traditional rowing boat sport that comes from Riau. Boat race on the Riverway has a length of about 25-40 meters with a boat crew of 40 to 60 people. Initially, the track post was organized in villages along the Kuantan River to commemorate the big day of Islam such as the Prophet Muhammad’s Mawlid, Idul Fitri, or Muharram’s new year.

Nowadays, the Pacu Jalur event has entered into the national tourism calendar, every year on 23-26 August they held the event festival in the series of Indonesia’s independence commemoration (17 August). The place is usually held in the Batang Kuantan River which in ancient times was a symbol of social identity because only the nobles were transported through the river flow. 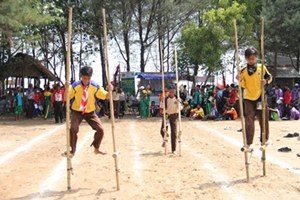 Stretches or stilts are poles or sticks that a person uses to stand a certain distance above the ground. Walking stilts are stilts furnished with ladders for standing, or straps to be attached to the legs, for walking purposes while rising above the height of the ground.

In Indonesia, stilts are usually contested in activities such as Indonesia’s independence commemoration. Aside from being a means of entertainment, engrang competitions also train the strength of the human body as well as in ancient times functioned to avoid from inundating water in flood land or beach areas. 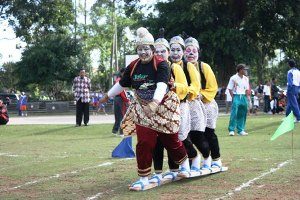 Clogs are one of the traditional games. The material is made of long wood like ice skate that has been smoothed and given a few slippers on it, usually for 2-3 people. They play clogs usually in groups or teams, each team competing to get to the finish line. This game tests agility, leadership, cooperation, creativity, insight, and honesty.

“Clogs” is actually a traditional game of children in West Sumatra. Children from West Sumatra born into the mid-1970s, often and regularly play these long clogs or spindles. Clogs long or often called pumped galuak in West Sumatra is a rippling series of long rubber strap board. A pair of ‘clogs’ has at least three pairs of sandals or played by three children. 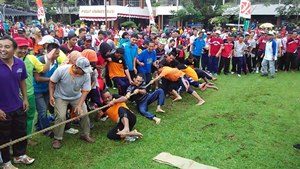 War of tug is one of the traditional sports or games that are quite popular on the 17 August celebration. The tug-of-war game involves two teams, with 5 or more participants. Two teams competed from two opposite sides and all the participants held tight to a rope. In the middle, there is a line border. Each team attempted to pull the ropes as hard as possible so the opposing team crossed the line. Teams who go beyond the passing line limits are declared defeated.

The game tactics lie in player placement, tensile strength and foot support on the ground. Generally, the player with the greatest strength is placed at the end of the rope, in order to hold the end of the rope while defending or stomping on withdrawal. 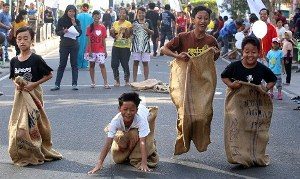 Sack Racing is a sport as well as a game that is also popular on the 17th of August. A number of participants are required to put their entire body into the sack and then race themselves to the finish line by jumping, those who finish first declare a winner. Although often criticized because it is considered to encourage the spirit of unhealthy competition, sack racing still held in some regions as a means to draw crowds and practice togetherness. 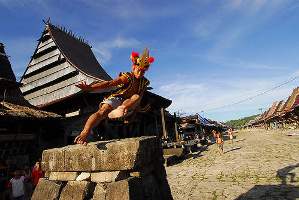 Rock jumping is a sport that is born from the traditions and culture of society on Nias Island. In the past tribes on the island of Nias often fought because of provoked revenge, land borders, or the problem of slavery. Each village then fortified its territory with rock or bamboo as high as 2 meters. Therefore, the stone jump tradition was born and performed as a preparation for the war.

Usually, before the tradition of the stone jump, they opened it with typical Nias war dances. Now the stone jump tradition becomes the ritual and cultural symbol of Nias society. The Nias youth who successfully perform this tradition will be considered mature and physically suitable to be married.

Rock jumping attractions not only give pride to a young Nias, but also to their families. Families whose children have succeeded in rock jumping will throw a party by slaughtering some livestock.

There are several other traditional sports in Indonesia which is still exist and played by Indonesian youth, as follows:

11. Tarung Derajat: Tarung Degrees is a martial art created by Achmad Drajat. He developed the technique through his experience of every street fight in the 1960s in Bandung. Tarung Degrees is officially recognized as a national sport and is used as a basic training by the Army.

12. Galah Asin: Galah Asin in regions are also called galasin or gobak sodor. The traditional sport of this Galah Asin is a kind of game area from Indonesia. This game is a group game consisting of two groups, where each team consists of 3 – 5 people. The game’s core is to block an opponent from passing the line to the last line back and forth and to win all the group members must complete the process back and forth in a predetermined field area.

13. Geudeu-geudeu: This is one of the traditional martial arts of the people of Pidie Jaya. This martial art is like wrestling played by men. One team consists of 3 people. Usually, geudeu-geudeu competes between villages, held after each has done rice harvest. As a martial art, geudeu-geudeu is a hard sport, geude-geude fighters must have strong physical and mental endurance, hold the opponent’s body and punch them thoroughly. In addition, geudeu-geude fighter is also required patience and fortitude. This is where emotions are processed. If the fighting emotion is unstable, it can lead to death.

14. Gasing: Gasing is a toy that can rotate on the shaft and balance at a point. Gasing is the oldest toy found in various archaeological sites and still recognizable. In addition to children’s toys and adults, gasing is also used for gambling and fate predictions.

15. Congklak: Congklak is a traditional game known by various names throughout Indonesia. Usually, in the game, a kind of clam shell is used as a congklak seed and if one can’t find it then they sometimes used seeds from plants and small stones.

The many traditional sports that exist in Indonesia took years of evolution and acceptance as the normal way to compete against each other and thus need to preserve as a legacy that will be practice for many generations to come. Hence will define the truly unique identity of Indonesia.