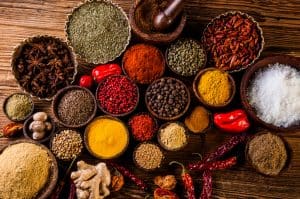 Indonesia has various kind of traditional food that you can find from Sumatra to Papua. Each of them has specific seasoning that makes its taste very different from other food. Each province also has different taste depending on their social cultural background. For example, Sumatra Province is famous for its spicy foods and Yogyakarta is famous for its sweet and light snack.

Those taste lies on the ingredient that’s used, especially seasoning. Indonesian seasoning is famously known as rich because Indonesian food often use various kind of herbs and spices to make their foods has rich flavour.

There are many kinds of seasoning ingredient from Indonesia. These are the highlights:

This is pretty common ingredient used in Indonesian food. Most of it use onion and garlic as the basic ingredient as it brings scent odour when it’s fried with cooking oil. They also make the food more tasteful.

Some of Indonesian food uses fried onion to give it crunchier taste by strew it on top of the ready-to-serve food such as Soto, Nasi Goreng (Fried Rice), and Bubur Ayam (Porridge).

Indonesian food often uses turmeric as their seasoning ingredient because of its taste and colour. Turmeric is usually used to make Soto, the brown colour of the Soto comes from Turmeric and specific ingredient design to Soto. However, Indonesian food still add turmeric to make it more tasteful.

Aside from only being seasoning ingredient, turmeric has multiple benefits for human body. Scientist believes that turmeric can heal cancer, digestion problem, and natural antibiotic.

Indonesia has two kind of ginger. The first one is red ginger that’s usually used to make herbal drink. Then, there’s usual ginger or white ginger that Indonesian people use as seasoning ingredient. You can find ginger easily on traditional market or minimarket. They also provide the powder version of ginger (factory product).

This ingredient is usually used in fish and meat based food as the odour of ginger helps to lose the fishy smell. It also could enhance the taste in the food.

Tamarind is commonly used in giving sour taste in specific food such as Indonesian Soup, Semur, and Sayur Asem (Sour Soup). You can find this easily on traditional market. To use this ingredient on your food to add some sourness, you just need to soak it on warm water and squeeze the Tamarind until it separates from its shell.

It has shape like a dried fruit, rounded, flat, wrinkled, and black. It’s commonly used in traditional cuisine. It has specific odour and people sell it dry in order to be able to save it for a long time.

Indonesian people doesn’t only use Cut cherry as seasoning ingredient, but also as traditional herbal drink as well. They process this cherry either by cut it into pieces, chopped it up, or shred it. Nowadays there’s instant Cut cherry drink that’s sold in supermarket. Both original and processed cut cherry have the same taste.

Cut cherry can be used to heal sore throat. Its natural antibiotic is very well-known in Indonesia. Moreover, people start to chew one or two cut cherry in a day and your body will get warmer and better.

It has long and delicate shape. The way to use this ingredient is just by chopping and throw it in the cuisine. Turmeric leaf has ability to give fragrance to your cuisine and get rid of fishy odour.

Having the same purpose as Turmeric leaf, Lime life can make Indonesian cuisine based on fish and meat to be fresher and less fishy. They are usually chopped into pieces and blend with other ingredient in the cooking process.

It looks like a rice: long, small, and wispy. Cumin seeds give your food spicy and hot aroma. It also can enhance its taste as well as Turmeric and Tamarind. Some Indonesian foods use it to enhance its taste such as Kari, Chicken Opor, and Gulai. This seed also has other benefit such as reducing stomach ache and antiseptic.

It may look like stone in the surface, but it actually a seasoning ingredient. If you break its skin, there’s black fruit inside. The fruit is often used to be additional seasoning to Indonesian soup. Pangium Edule needs to be processed first before using it because its raw fruit contains hydrogen cyanide that’s dangerous for human body.

This is how to process Pangium Edule so that it can be used as seasoning ingredient: First, wash the fruit until it’s certainly clean then boil it for an hour. After that, keep it in a pan with sprinkling ashes below the pan. Inside the pan cover the fruit with layer of ashes and leave it within 15 days. After that, clean the fruit and it’s ready to use.

It may be very complicated but the result is worth it to be used in the cuisine.

Star Anise is seasoning ingredient commonly used in Indonesian, Chinese, and Indian cuisine. It has brown star-like shape with little seed inside it. There’s also powder product in order to give easier utilization.

We can generally find clove in Indonesian soup. Since it has specific and unique odour, it’s usually used as natural fragrance for a food. Clove can also be found in Nastar, a special cookie that Indonesian people usually serve in big holiday such as Christmas and Eid al-Fitr.

With modern technology, there are many instant product in the market. Most of Indonesian food that uses Candle nut is soup, such as Soto. This is one of original spices in Indonesia that makes it different from other cuisine in the world.

Talking about Indonesian seasoning ingredient it’s not fair if chili isn’t mentioned. Most of Indonesian food uses chili to make it spicy. There are many kinds of chili that Indonesian farmer produce. From not spicy one to very spicy one.

This seed has its powder version and seed version. It has the same purpose as clove and cinnamon, to give fragrance to the cuisine. Other than that, Coriander seeds has benefits to ease your digestion system. It’s commonly used in various kind of Indonesian food or almost all cuisine from Indonesia uses coriander seeds alongside with onion and garlic as basic seasoning ingredient

The triple combo of Indonesian leaf for seasoning ingredient: Turmeric, Lime, and Bay Leaf. All of them has the same purpose: to make the cuisine fresher and make the cuisine more sweet-scented. Most of Indonesian food, especially soup, use this as additional seasoning. It’s also believed that this leaf can reduce the risk of suffering from diabetes and heart attack.

7 Best Time And Place To Surf in Indonesia