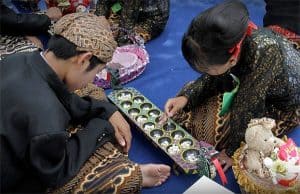 Indonesia has various kind of traditional games. It derives from generation to generation to teach children respect, togetherness, and kindness. Each of traditional game in Indonesia has its own philosophy. For example, Lompat Tali (Rope Jumping) teaches Indonesian children that life is full of challenge. Once you accomplish a level in rope jumping, another challenge awaits to test your limit.

This is the effective method that Indonesian people use to teach their children life lesson since children likes to play. There is also unique traditional game originally coming from Indonesia. It’s called Congklak, a board based game using stone to put it on each hole on the board. It’s one of the most difficult traditional game in Indonesia since it requires strategy and calculation to make a move. However, this game is very popular among Indonesian children.

Congklak was first brought by Arabian merchant when they first come to Indonesia since they also has similar board game like Congklak. Most of the time, this game is commonly plated by girls since boys in Indonesia prefer to play kiting and football.

Back in the time where Indonesia consisted as kingdoms, royal society played this game on board using plant seeds they could gather from the garden. While peasant can dig a hole in the ground and use stones to understudy the plant seeds.

There are two types of Congklak board nowadays. Wooden based and plastic based Congklak. Its difference is only on its board type. However, wooden based Congklak is sold more expensive than its plastic counterpart since it feels more classic and original. Nonetheless, the rules of playing this game is the same from the beginning.

Congklak is usually played by two up to four people. It needs a board consists of seven holes facing each other and one additional hole in each tip. In total there are 16 holes in the board. It also needs around 98 plant seeds or stones. In each hole, seven seeds/stones are thrown except the two big hole in the tip.

Each players needs to circle the seeds until there are no more seeds on the 14 holes. The player who has more seeds in their hole is the winner, which means you need to calculate where your seeds will end. If your seed ends in your opponent hole, your turn will end and your opponent will start their turn. You will get your turn to play if your opponent land its last seed on your hole.

It can be a bit strategic since you can predict where your seed will end. If it ends on your opponent hole, you can take over their board and win the game.

When the player move the seeds from one hole to another, it will force its motor sense to work. Thus, It will train its eyes, nerve, and brain to connect to each other to respond to the outside world. Moreover, it trains its physical ability since it involves the coordination from eyes and hands.

Since Congklak needs strategy to win, it will train children to think about what next move they want to do in order to benefits enemy’s board. It challenge their brain to respond to the challenge offered by the enemy. Thus, it trains children’s brain to solve the problem they face.

This activity is very good for children since in the golden age, it’s recommended to train their ability to think and respond to simple problem in order to prepare them later in live. Congklak is one of the good method to train them since it offers various kind of problem solving activity that can be beneficial for the children in the future.

Believe it or not, this unique traditional game can teach about honesty within human soul. This is because whenever a player gets a turn, they will put their seeds on every hole. However your enemy will not watch you closely all the time. This step is where your honesty is tested.

You suppose to put one seed in one hole and keep doing that until your hand is empty, but you may put two or more seeds to make your seed doesn’t end up in your opponent hole. But that’s an act of cheating and you’ll probably ruin the whole game for doing that.

That’s why this game also teach honesty and fairness since it’s also about questioning yourself whether or not you honest to yourself about your game strategy.

6. Congklak Can Enhance your Patience

Since one turn on the game can be very long depending on how good your opponent is, this game can challenge your patience and at the same time enhance your patience to another level.

When the game is over, none of the player will dispute because of the result. They usually tend to accept whatever the result is and move on to play another exciting game. Children usually don’t care about the winner since playing a game with their friends what makes them happy.

7. This Traditional Games Teaches You How to Follow the Rules

There’s rule in Congklak about turns, putting and taking the seeds, and calculating the seeds. Since Congklak has strict rule, both of the player need to follow it. If they don’t, most of the time the game will turn badly and end up in both of player have argument about fair, trust, and honesty.

This teach children to follow the rule everywhere, at least if you don’t like the rule, try to respect it. Because if you can respect the rules of simple game like Congklak, it won’t be easy to follow the rules in the society. This game is perfect example to teach children how to respect a rule and how to be respectful person to other people belief.

8. The Oldest Game in the World

Like it has been mentioned in the beginning, Congklak is originally from Arab country and Africa. Since they have similar gameplay like its Indonesian counterpart. However, this game was brought in Indonesia by their merchant. This game is also popular in the Philippines under the name of Sungka.

According to archaeologist from National Geographic, this game approximately has been around in the world since 7000-5000 B.C. It’s believed that it was originated from Middle Eastern ancient society, then it spread its wing to Africa and Asia later on.

Congklak might be popular in Java. But it’s also popular in Sulawesi and other region as well and they serve in different purpose as well. In Java region, this game has purpose to entertain people by reciprocal relation between two friend rather than creating rivalry.

However in Sulawesi, this game is believed cursed and it is only played whenever there’s deceased family members. Thus playing this game in public space and outside mourning time will be considered as taboo.

Nowadays, this game is almost extinct as new technology arises among the children. They are more interested in video game rather than traditional game and activity outside the house. This is concerning because this game will only be a memory in the future. While, Congklak is no longer attractive in the eye of children. Perhaps, it’ll only end up in the museum on day as one of the rarest game in Indonesia.