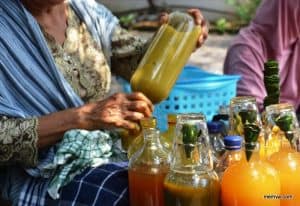 As a country with abundant result in nature, it is not such a surprised if Indonesia has many nutritious medicinal plants.

Hence, no wonder it’s been long time since the Indonesian people use medicinal plants as a treatment to medicate the health problems.

The elderly even the kids love to drink it. In addition to efficacious, jamu is chosen because it has a very minimal side effect.

According to the Old Javanese linguist, the term of “jamu” came from the two ancient Javanese word abbreviations namely “Djampi” and “Oesodo”. Djampi means healing using medicinal herbs or prayers and ajian-ajian. Meanwhile Oesodo means health. In the Middle Ages (15-16 AD), the term oesodo was rarely used. In contrast with the term of “jampi” that was increasingly popular among the palace. Then, the term of “jamu” was introduced to the public by a traditional “healer” or in Indonesian language called tabib or dukun.

The evidence that jamu has existed since ancient times could be found in the relief of Borobudur Temple during the Hindu-Buddhist era in 722 AD. The relief depicts the habit of mixing and drinking herbal medicine to maintain the health. Another history fact is the discovery of the Madhawapura inscription from the Hindu-Majapahit Hindu as drawn that there was profession of “peracik jamu” (someone who make jamu formula) who called Acaraki.

Historically there was a book which contains the proceduresand the types of traditional medicine that exist in Indonesia in the term of 991-1016 AD. The formulation of drugs and the extraction of plants were written on the lontar (palm) leaves. Some of these documents have been translated into Indonesian and foreign languages. In the time of the kingdoms in Indonesia, knowledge of natural drug medications has also been recorded, for example Bab kawruh Jampi Jawi by Surakarta palace which was published in 1858 and consisted of 1734 herbal formulations.

The ancestors of that era have noticed the health of the body and also the beauty of the thousands of recipes written in the book which is a formula for the beauty of women. The Book of Primbon Jampi Jawi was a written reference for the oldest jamu for beauty originating from the Mataram Kingdom (right now is Ngayogyakarta Hadiningrat).

A scientific study of jamu was performed by Rumphius, A German botanist who worked for VOC in early 1775 AD. At that time he did research on various varieties of plants in Ambon. From the research was born a very spectacular book in the field of herbs, namely ‘Herbarium Amboinesis’. The publication of the book gives its own enthusiasm for the rise of a new understanding of Indonesian herbal medicine which is known as jamu.

After a little bit time, a scientific research for herbs was done by the herbal medicine research center at the Bogor Botanical Gardens. It gave birth to a work of “The Book of Child and Adult Medicine”, compiled by E. Van Bent. The rapid development of herbal or herbal plants continued to occur. Various kinds of seminars and discussions were conducted to restore the calm community’s understanding of herbs to the correct understanding.

The first seminar about herbs and jamu took place in Solo in 1940, followed by the establishment of the Indonesian Jamu Committee in 1944. In 1966, a seminar on herbal medicine was held again. In 1981, a book entitled “The Use of Medicinal Plants” was established to support the domestic herbal medicine industry.

For the people of Java and Madura, traditional herbs medicine is more widely known as jamu. The term of jamu comes from the Javanese language which means traditional medicine derived from plants. Currently the term herbal medicine has been adopted into Bahasa Indonesia with the same meaning.

Jamu gendong is one type of herbal medicine that is sold without label, prepared fresh from plant material, without preservatives and sold widely in the stalls. Jamu gendong can also be prepared instantly for those who order it. The seller then takes it door to door. The term gendong itself means carrying something with your back. Herbal preparations are put into bottles, and the bottle is placed into a bamboo or rattan basket and carried with the back using a long, wide cloth called a selendang (scarf). Up to now, you could even find jamu gendong in big cities of Indonesia.

In ancient times, jamu was processed by boiling or simmering (boiled jamu). Traditional tools usually used were household appliances such as, Lumpang (small iron mortar), pipisan (iron tray to grind the herbs), grated, caulk (clay pot), etc. You can meet the various simple tools around you. But nowadays, you don’t need to process raw herbs. Jamu has been widely circulated and produced by leading herbal manufacturers with very modern equipment.

Then, herbal medicine is transformed into a more contemporary drink. In some places, herbs are used as beverages that can be served with at least milkshakes or fruit juice in some hangout space. In fact, in metropolitan city like Jakarta, you can find a cafe that specializes in selling jamu, but in a more modern design.

Those are the history of jamu in Indonesia. By knowing jamu transformation today, this is certainly very good for the sustainability of herbal medicine in Indonesia. No matter what, the heritage of the ancestors must be preserved. As a millennial generation, it’s time to keep jamu out of extinction. So, don’t forget to always drink jamu!

The Brief History of Indonesian music

The Brief History of Indonesian Art