Home » History » The Growth of Technology in Indonesia (Opportunity and Challenge)

The Growth of Technology in Indonesia (Opportunity and Challenge) 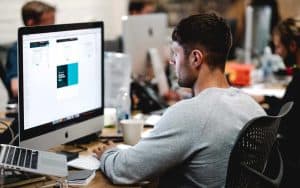 The world has now entered the era of industrial technology 4.0. Everyone in the world now lives virtually and digitally in so-called internet. Most of every aspect in the world now is connected to computer and data base. It’s no wonder now that people rely too much on internet connection nowadays than 10 years ago.

Technology has changed human lifestyle and it will keep changing it in the future. There are pro and cons surrounding the topic. Nonetheless, people will keep follow what’s trending and technology leads human to another level of living style.

Indonesia as a big nation also has to respond this phenomena. Scholars, government, entrepreneurs, and society work together to react positively to this new era of digitalization. But before this era stomps Indonesian society to react fast, there has been a long journey before Indonesia joins in the ocean of digital society. Here are the summaries and some histories around it:

1. It begins with Industrial Revolution

Industrial revolution in 1760 brought huge impact to the development of our world. Indonesia probably hadn’t discovered yet at the time. But European people competed each other to invent technologies in order to help daily production and communication at the time. In this era, people invented vehicles, sewer machine, bicycle, telegraph and telephone, and so on. The first wave of Industrial revolution would bring impact to the future.

2. Then It Continues in World War (Early 20th Century)

Both World War I and II had also brought huge impact to technological advancement. The first computer was found by Alan Turing during World War II to decode Nazi’s secret letter and helped end the war. Military technology was also advanced to respond the hollow situation back in the day.

In World War, they also invented vaccination to prevent virus and bacterial infection in war time. This technology helped to reduce the number of death caused by smallpox and polio. Not only World War, had Cold War also helped the advancement of aerospace technology because most of the countries compete to reach space at that time.

4. The Rise of Television

Industrial Revolution 2.0 affected the development of technology in Indonesia. This phenomena was marked with the rise of television. People begins to watch news and shows on TV back in the day since they use audio visual technology.

In Indonesia, the first television channel is government’s channel (TVRI). It is established in August 17th, 1962. At that time, only few people had access to television because its price was high. That’s why most people visit other people’s place to only be able to watch TV. There are also more stories about Indonesian television that might be interesting to you.

5. The First Satellite in Indonesia

Because of high demand of clear broadcasting across the country, RRI (Government’s Television Organisation), spreads its broadcast to some big cities in Indonesia, such as Yogyakarta, Medan, Makassar, etc. Then between 1963 and 1976, Indonesia launched its first satellite called Palapa to make the broadcast clearer and more accessible.

Not long after that, private television started to grow in respond to political agenda performed by TVRI. Since then, some new channel offers various television shows that can be experienced by Indonesian people.

6. Introduction of Internet in Indonesia

Indonesia was introduced to internet in late 20th century, between 1980s and 1990s. But it got popular by 1990s where people started to use email and Friendster. The first Internet provider in Indonesia was Indo.Net. Then alongside with the development of telephone and Wi-Fi, people start to install internet in the workplace in order to ease their work. Usually it’s used to make business email, then it grows to more marketing focused in the future

Internet in Indonesia has been growing since then. Introduction of social media and video platform pushes faster internet focused for the society. Then Indonesia developed its internet from 2G to 3G in the first decade of 21st century. Just a few years ago, Indonesia advanced its internet technology to 4G responding to the idea of industrial revolution 4.0. 4G provides fastest internet speeds nowadays, allowing people to surf everywhere around the internet.

Introduction to 4G leads to more and more digitalized lifestyle such as online shopping, online study, and online game. Everything is now touched by internet. It also opens many opportunities for job vacancy yet it also brings big challenge to the nation stability. But, there are several rules that Indonesian people must obey when accessing internet.

Internet and its complexity brings new way of life for Indonesian people. Internet makes everyone can access whatever they want to do because it connects a computer to all of the computer in the world. Indonesian people are able to know what happens right now in Europe or in Africa. You also can check other effects of Globalization in Indonesia

Globalization connects everyone without a barrier, which is why there’s danger when someone surfs in social media. Security and privacy are probably the most important thing that should be aware of when someone digs on internet since every personal information is submitted in internet’s data base and that identity could be used in the wrong way by irresponsible actors.

9. What Are the Opportunities Then?

Industrial Revolution 4.0 changes the world from traditional and manual method in to digitalized form. It creates new opportunities in investment and economy as digitalized economy is a new thing introduced in Indonesia nowadays. Many start-ups and unicorn grow in Indonesia serving in different method and works in order to respond this new phenomenon.

The appearance of digitalized trade is also a respond from Indonesia to Industrial Revolution 4.0. New method to pay order from internet, emergence of digitalized transportation services also create new opportunity for Indonesian society to grow and survive in this new era. Nonetheless, Indonesia still has some unique jobs that don’t require internet.

Since everything now is digitalized, Indonesian society is expected to challenge it by creating opportunity to create economic benefits that contribute to the country’s prosperity.

10. What about the Challenge?

The Challenge in this open and transparent digitalized social life can be dangerous for some people who doesn’t understand how it works. Security and privacy is the main issue that usually sparks if it comes to internet. People submit their personal identity to a website or social media willingly and if social media doesn’t secure their user’s data very well, it could be used to dangerous agenda for example black campaign or hate speech.

There’s also the threat of cryptocurrency, a system that set a currency in digital platform. The currency can be very unstable that can even affect real life currency which will lead to unstable economy. There’s also a taxation system that’s hard to track because the money is in digitalized form. For some people, that can be manipulated easily and get out from taxation responsibility for their company.

It is a responsibility for the government to secure their people’s online identity and also to literate them with the system. There has to be a program from the government to create a platform where people can undertand the risk and consequence if they go surfing on the internet.

3rd Indonesian President, B.J. Habibie says that someone who masters technology will rule the world someday. That citation is true if we see in our daily live nowadays. Big Tech Companies invent newer and newer product to adapt and respond to the internet of things phenomena. But Indonesia has to be wise in choosing its steps to respond to this phenomena, if they doesn’t, it could be dangerous for nation’s security and stability. Nonetheless, Those are brief history about technological development in Indonesia. I takes some times but Indonesia now has incredible advanced technology to compete with big countries.

10 Facts of The Eastern Island in Indonesia, Papua