Papua is the most eastern part of Indonesia. It is extremely rich in culture and natural resources. Most of their nature still lies untouched and play a huge part in their lifestyle. You can see this through their food. Their cuisines are tightly woven with their surrounding nature.

These 13 Traditional Food in Papua Indonesia will tell you the kind of food that they usually eat. You will see that most of their food contain sago from the sago trees that are grown all over the region. But there are so much more that you should know about which you will find here. 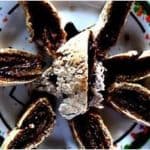 As for the one in Papua, sago is the main ingredient for it. Sago is grinded until is soft and then fried.

After that, it is mixed with some brown sugar which makes it sweet. This traditional food actually originated from Fakfak regency in Papua. 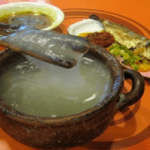 This next traditional food from Papua is called as Papeda. It uses sago as its main component as well. However, the sago is made into a porridge consistency.

The dish is transparent and sticky like glue. The taste of this dish is bland because you will need to eat it with other kinds of dish.

Papeda is usually eaten with a fish soup. You eat Papeda with a a bamboo stick to roll it up. You don’t have to chew Papeda, you can just swallow it instantly. Chewing will only make it all sticky in your mouth. 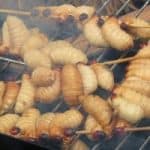 Sago grub satay is a dish commonly found in Papua. It may take certain kind of people to like this dish as it’s quite different than others.

The sago grubs are collected from the sago trees. They must be the kind of trees that are already old and weathered.

The sago grubs are then placed on bamboo sticks to be roasted or grilled. This food is often eaten by the people in Papua as snacks. 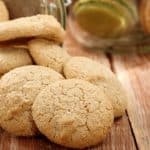 Bagea cake is small and tough. What makes it traditional to Papua is the sago and the walnut. The taste of this cake is like no other.

As mentioned before, the cake is quite hard so if you’re not accustomed to eating it, you might struggle a bit. There’s a hint of cinnamon and clove in its flavour.

People often eat this with tea or coffee. Bagea cake is often packed in dried leaves. However, they also come in boxes so that people can take them home as souvenirs. 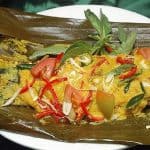 Ikan Bungkus literally means wrapped fish. In this dish, a fish is cooked inside a taro leaf. They don’t leave out the special herbs and spices from Papua though.

The most prominent taste from this food is its saltiness. The salt is an important part of it because it helps to get rid of any sap that is released from the taro leaf.

The fish is grilled slowly with a small fire. It may take some time for the fish to fully cooked. Once it’s done, the wrapped fish is then served to people while it is warm. 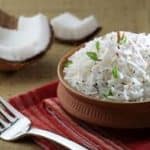 Aunu Senebre is mostly made with anchovies. The anchovies are fried with rice and then mixed with taro leaves that are already cut up into smaller pieces.

The taro leaves make this dish tasty. Grated coconut is added too. For some people, this dish might feel a bit too dry.

But they can just eat it with Papeda. The chewy texture of Papeda will balance out any dryness from this dish. It’s also a great way to eat two traditional Papua dishes at once. 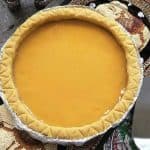 This cake is similar to the milk pies that are sold in Bali. But Lontar cake is made in a different way. The cake is molded using a ceramic plate. The size of the cake is determined by it.

If the ceramic plate is huge, then the cake would also be big. Other than that, this cake is often served during special occasions such as Christmas or Eid. 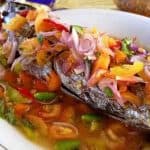 This is another traditional dish that contains fish. It originated from Manokwari, a town in West Papua.

The fish that is used in this dish is the mackarel tuna. What makes this dish special is the chili that comes with it. It can only be eaten in Papua.

Unlike other grilled fish in Indonesia, it’s not slathered in sweet soy sauce. The fish is very spicy from the chili. 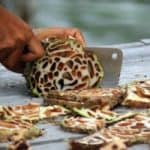 No, this dish is not about an actual ant’s nest. The name actually refers to a kind of plant that can only be found in the forest of Papua.

It’s an extremely unique plant that resembles the intricacies of an ant’s nest, thus the name. This traditional food is often in high demand by people outside of Papua because of its many healthy properties. It is usually used as medicine in Papua. There are also cakes that are made of the ant’s nest. 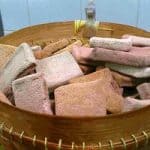 Those who live in Papua often make this traditional food to eat for themselves. So it can be hard to find it in sold in shops. It is also best eaten while it is hot.

The sago are molded into rectangles and then roasted with fire. The colour of the sago slabs are usually brownish red.

The slabs are very hard so it can be quite difficult to bite it. This food last for a long time because it doesn’t contain water that could attract microbes or mold. 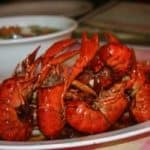 The name is odd but there’s a reason for it. This traditional food contains a huge prawn with claws that resemble crabs’ claws. So a prawn must have cheated with a crab to create this massive prawn.

The meat of this prawn is soft and sweet, similar to that of a lobster. It is often served with all kinds of sauces in Papua. It’s a very fulfilling dish and you can eat it in any way you want. 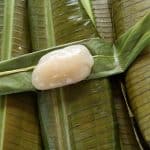 Saksak is basically sago dumplings. The texture is slippery and jelly-like. The ingredients are sugar, tapioca and mashed bananas.

They are mixed together and wrapped up in banana leaves. Then, they are steamed for a couple of minutes and served when ready.

Saksak is not that sweet. The only sweetness will come from the bananas as the sago doesn’t offer a striking flavour. 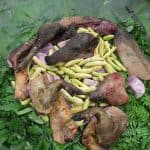 The main part of the traditional Mumu dish is the meat. Other than that, so many vegetables, spices and salt are added.

They never leave out the coconut milk, of course. All of those things are then wrapped neatly inside banana leaves. Then, they are placed inside a ground oven that are heated with very hot stones. People then eat this food with their hands. They share the food with family and friends.

In case you ever visit Papua, you should definitely try out all this food. It will be an unforgettable experience to savour the food while surrounded by the beauty of Papua’s nature. You’ll create a deep connection with the communities through their food as well.

30 Facts About Importance of Bali Indonesia