The History of West Papua Indonesia 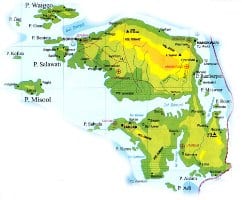 The history of West Papua or formerly known as Irian Jaya before Indonesian independence is less discussed in national history books for elementary to middle school, so many do not know it.

The history of western Papua in relation to the part of the Unitary State of the Republic of Indonesia is very unique. Although Papua is “somewhat late” that is recognized by the international community as part of NKRI, but actually, from the beginning, the people of Papua have been a “big family” of people who inhabit the archipelago who later joined and formed the State of Indonesia.

In the time of the kingdom in the archipelago, the Government of Sriwijaya Kingdom recorded ever sending the original birds of Papua, then called Janggi to the Kingdom of China. From some past names given to this Papua, it is clear that since this region is known in history, there has been a very close relationship between this region with other regions in the archipelago at that time.

Another name for Papua in the past is “Samudranta”, which indicates that Papua has been known by Sansekerta users who live in the Indonesian archipelago, both in geopolitical and socio-economic terms. And the culture in a broad sense.

The researcher writes that in the first century AD Hindu and Indian influences had spread throughout the archipelago at that time and were not limited to Java and Sumatra alone but also spread to the east including Papua. Perhaps the so-called “Pulau Ujung Samudranta” is the island of Nieuw Guinea.

Apparently, Indian sailors have come here, as evidenced by the records of the Indians who call Irian the Samudranta, which means the island at the edge of the ocean. There’s a great chance they’ve set sail in this area.

If it is connected with the Sriwijaya Kingdom it is likely that the naming was given by the maritime kingdom, which is an indication that the island of Irian has also been under the control of his power.

In the 13th century, a Chinese traveler named Chau Yu Kua wrote that in the Indonesian Archipelago there is an area called Tung-ki which is part of a country in Maluku. Tung-ki is the Chinese name for Janggi or Irian.

During the Majapahit Empire (1293 – 1520), the Kertagama Book of State written by Mpu Prapanca also explicitly mentions the territory of Papua as part of the Majapahit Kingdom.

After the arrival of the Europeans, in 1660, an agreement was reached between Tidore and Ternate under the auspices of the Dutch East Indies Government which stated that all the territory of Papua was in the territory of the Tidore Sultanate. This agreement shows that initially the Dutch Government actually recognized Papua as part of the population in the archipelago.

Thus, the regions of Indonesia is comprised of the regions who were once colonized by the dutch then Papua became the province that joins Indonesia soon after Independence.

The Papua conflict is a conflict in the territory of Papua, Indonesia. Beginning in 1961, the Dutch desire to form a state of West Papua free from Indonesia, This Dutch aggressive move prompted President Soekarno to get closer to the communist countries, especially the Soviet Union.

Sukarno’s attitude of getting close with communist sow fear for the Netherlands and then President of the United States John F Kennedy. Because if that is allowed then Indonesia is very likely to be the largest communist country in Southeast Asia.

This fear then made the Dutch to take the attitude to submit the issue of Papua to the UN. From and through the United Nations, the Netherlands took an attitude to get out of Papua and did not take, seize and colonize Papua.

Then Papua was handed over to Indonesia provided that it was possible to give Papuans the opportunity to decide their own position or referendum (People’s Determination / PERPERA). Through PERPERA in 1969, the people of Papua choose to stay within the Republic of Indonesia.

The Inauguration of West Papua as A province

West Papua is an Indonesian province located on the western tip of Papua Island. Its capital is Manokwari. The name of this province was previously called West Irian Jaya stipulated in Law Number 45 The year 1999. Based on Government Regulation No. 24 of 2007 dated April 18, 2007, the name of the province was changed to West Papua. West Papua and Papua are provinces that have special autonomy status.

This province of West Papua although has been made a separate province, but still get special treatment as the another province. The province also has its own Election Commission and holds elections for the first time on 5 April 2004.

Papua, the richest and largest island is indeed often getting the underdeveloped stereotype of his own country. Identifying Papua with their backwardness may be based on our ignorance and the image that the media portrayed so far about them.

Since 2014, the Indonesian government really wants Papua to change so that it accelerated its economy by improving the welfare of its people and to do that by building the road that will connect many parts of Papua.

The process of prosperity should begin with the development of adequate infrastructure as well. The planned Trans Papua Toll has 4,425 kilometers (KM), and the currently connected road has reached 3,767 KM or about 88%.

Not only for the sake of infrastructure, but this toll road also has beautiful views.

On the other hand, in Papua especially the city of Jayapura there is also a large economic center and has many modern shopping centers located there.

The mall is a shopping center in which many tenants such as Hypermart, J.CO, Matahari Department Store, Cinema XXI, KFC and also McDonald’s existed here. In addition, if we walk in Jayapura then it is not that difficult to find for the conditional requirement of the current modernization era.

Moreover, there are International class of hotel exists in Papua. The names of hotels such as Swiss-Bell, Aston, and The Horizon may prove popular for traveling lovers. Yes, do not just think to wander there in Papua and then you will only find the forest or live in cheap huts.

Thus, in fact actually the hotels with the best facilities also already exist in Papua. And the current development of other hotels is still ongoing. This makes Papua even one of the most expensive tourist destinations in Indonesia due to the development and exoticism provided by the region.

Ob Anggen School is a model of modern and international educational institutions founded in the region of Papua. Ob Anggen School was established in 2007, originally intended for Early Childhood Education or kindergarten level, here the teacher directly comes from America and the language of instruction is English.

Nowadays, Ob Anggen School also has kindergarten and elementary school. Therefore, when talking about education in Papua, then actually in Papua they’re not that really behind compared to other regions. They, even more, have the equivalent of a facilitated expensive schools that can be proud of.

Do you know names like Boas Salosa, Fredi Numberi and Ari Sihasale from the land of Papua? They are Papuan children who have gained national and even international gold medal.

Boas Salosa is a national team player who brings prestige to the national team name on the international scene and is also the Captain of the national football team, Fredi Numberi has been lined up as a fishery and marine minister in the era of the leadership of President SBY and Ari sihasale who is a young filmmaker by producing quality films in the country.

These are just a handful of Papuan portraits that have been transformed into an increasingly developed one. The difference is, there is much pristine nature, while in other islands have touchable development. Despite many issues about living costs and limitations, gradually more people will be interested in living in Papua than to live in Java and this opinion has been shared by current President Jokowi in that he had poured trillions of rupiah to help advance development of west Papua

History of Chinese in Indonesia