Home » Food and Beverage » 10 Local Types of Durians in Indonesia

10 Local Types of Durians in Indonesia

Not everyone likes durians. For some people, durian is not a delicious fruit to eat. However, some people also think that durian is the best fruit in the world. Although some people do not like the smell, but not a few people like it. Even some others are crazy about the sweetness produced by the fruit with the characteristic of this spiked skin. Durian is a type of fruit that is very much in demand in Indonesia. Here are the types of durians in Indonesia.

Durian Si Mimang is a fruit originating from Banjarnegara, Central Java. This durian has the characteristic of its skin that seems deflated. If you open it, it will find durian fruit that has a thickness of about 2-3 centimeters from the seeds. In addition, the fruit from the very sweet and legit Durian Mimang had won the 2nd place in the durian contest in Southeast Asia.

Durian Si Mimang has an oval shape and is small, about 15 centimeters in diameter. Has an attractive color line from the outside, greenish yellow. This durian gives a fluffy sweet taste, the texture is rather fibrous, thick thick, with little moisture and a little taste of alcohol.

This Durian comes from Cimanggu, Bogor, West Java, which is a durian fruit that has an elliptical green brown shape with a thickness of about 0.5-1 cm. The torso is large, pointed, rare and slightly bent.

The fruit is thick, dry, fatty, sweet with a smooth texture and the aroma is quite sharp. Unfortunately, this type of durian fruit is not resistant to borer pests and root rot. Durian is called durian matahari because the color of the flesh is golden yellow like sunlight (matahari). Sun Durian is famous for its sweet taste with not too sharp aroma. 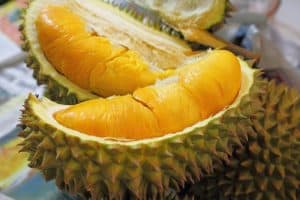 This one durian is the most famous type of durian in Indonesia. Even for one seed with a meat dressing on it, it is sold at a price that is quite expensive if it is cured in Rupiah. This native fruit of Borneo has a characteristic meat that is quite large with a sweet taste and also smells nice when opened.

In addition, another characteristic is that the shape is not full round, but slightly oblong with irregularity. If you are ready for picking, Durian Montong can weigh about 13 kilograms. 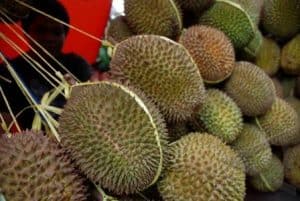 It is said that Durian Petruk is a combination of Durian Montong with Durim Candimulyo, because of its oval shape and its semi-sweet and bitter taste when felt. Durian which has the Latin name Durio Zybethinus Kultivar Petruk also has a sharp aroma like Durian Montong.

Original durian fruit from Jepara, Central Java, this is one of the best durian seeds that is popular with durian farmers. This is because the flesh is not soft and thick, and the seeds are small.

Candimulyo or known as another Candy Durianis a type of durian originating from Magelang, Central Java. His trademark is quite large and the seeds in the fruit are small. An unbalanced thing isn’t it?

Ajimah Durian is also known as Durian Bung Karno or Durian Sukarno. This is because this type of one is very popular with the first Indonesian president. Durian originating from Ciomas, Bogor, has the characteristic of large and rare thorns, and its skin is slightly grayish green.

The meat inside is light yellow and feels dry, and has a fibrous texture. Although dominated by sweet colors, but there is a bit bitter that will be felt on the tongue when you eat it. 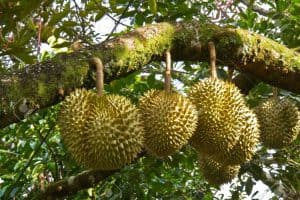 Durian salopa is recognized as having good quality, but not as popular as other types of superior durian. Tasikmalaya is a center for durian production in West Java. Durian production centers in Tasikmalaya are distributed in three sub-districts, namely Salopa District, Jatiwaras District and Cikatomas District. 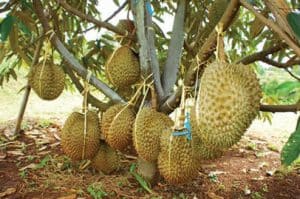 If you want to buy Durian Montong, then you have to know really what it is. Because you can buy the wrong seller who said that the durian he sold was Durian Montong. This is because there is one type of durian that has similarities with Durian Montong Kalimantan, namely Durian Bawor originating from Banyuwangi, East Java.

This kind of durian has characteristics similar to Kalimantan’s Durian Montong, namely its sweet and thick fruit and its relatively small seeds. Durian Bawor itself also has 2 other types, they are Durian Bhinneka Bawor which is the result of the Four Legged Durian Bawor.

Durian Si Dodol comes from Karang Intan, South Kalimantan. The advantage of this type of durian is that it is resistant to fusarium attacks and fruit borers. It is called dodol because its tecture almost same with dodol (sweet traditional cake  in Indonesia)

The size of the fruit is small with a weight between 1.5 – 2.5 kg. The fruit skin is yellowish green with tight, blunt and cone spines. The flesh is thick enough, yellow, smooth, sweet, fatty and slightly soft and with small seeds. 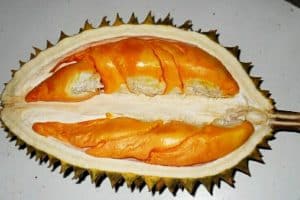 Lay durian is a type of durian originating from the hillsides in the interior of Central Kalimantan. The distinctive feature of this fruit is that it has the color of a slightly pale orange with sweet taste like sweet potatoes, but it is less legit and the meat is thick and has little alcohol in it. The smell is also not so stinging.

In addition to Central Kalimantan, Durian Lay can also be found in East Kalimantan. This one fruit is also bred in Queensland, Australia.

Those are the types of durian in Indonesia. All of them are local crop of Indonesia that could compete to other durians come from other country in Asia.

10 Local Types of Rambutan in Indonesia