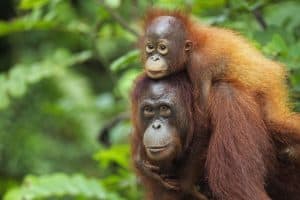 Indonesia is rich in interesting and unique fauna life. One of them is a forest person, so funny and also adorable to see the cleverness and physicality of forest people. Its appeal and life are worth exploring and should be preserved as a rare animal asset.

The breeding of forest people is currently in a critical stage, its natural habitat is that the forest has begun to have encroached for the needs of the factory and also the settlement. So important and reasons why orangutans are endangered in Indonesia.

Because of their minimal habitat, it is necessary to have a rehabilitation center or temporary shelter for forest people who experience trauma or life away from the forest. Because if their population becomes extinct, the next generation will be very difficult to find and see the physical people of the forest. Well, here is some best place in Indonesia to see people who can visit anytime:

Tanjung Puting National Park is a national park in Central Kalimantan. It is one of the best places in Indonesia to see the Bornean Orangutan.

In Tanjung Puting National Park (TNTP) we can see orangutans at conservation camps at certain hours according to the schedule determined by the national park. One of the most famous camps is Camp Leakey. One of the things interesting facts about Indonesian orangutans. At this camp, we can see the orangutans being fed by the officers. This feeding activity is often called feeding time. Funny isn’t it!.

At Bukit Lawang, visitors can see orangutans by jungle trekking. There is one rule that visitors must adhere to if they meet orangutans during trekking. Visitors are not permitted to feed orangutans. Because they already have their own meal schedule.

In addition to Tanjung Puting, other places you can visit to see Bornean Orangutans in their natural habitat are Kutai National Park.

This national park is in the province of East Kalimantan. The spot that visitors can visit in the Kutai National Park area is the Prevab Forest. Unlike Tanjung Puting, in Kutai National Park there is no special area for conservation. Orangutans are allowed to live in the wild without human intervention and you can see their wild and interesting life. Hence interesting facts about Sumatran orangutan that you should know.

Still from Kalimantan, besides Tanjung Puting and Kutai National Park, another place where you can see orangutans in their native habitat is in the Betung Kerihun National Park. The location of this national park is in the province of West Kalimantan, bordering Sarawak, Malaysia.

Visitors who want to see wild orangutans in this national park will usually be guided by local residents. This place has become an attraction as the best place in Indonesia to see orangutans.

Here you can see the baby playing, besides that you can also watch other wildlife directly. A very interesting and also fun place to enjoy the lives of the forest people there, you can participate in providing baby food for the forest people and accompanying them to play.

Ragunan Zoo is a zoo located in Ragunan, Pasar Minggu, South Jakarta, Indonesia. The zoo was founded in 1864. In it, there are various collections consisting of species and specimens and one of them contains forest people. In this place, you can visit and just see and find out about forest species.

Ticket prices are quite cheap, but you cannot touch the forest people in this zoo. Just research and see the funny behavior. You should know the top interesting facts about orangutans in Indonesia.

Another zoo that presents fauna tourism like forest people is Surabaya zoo. The location is in the center of Surabaya, this place becomes a tourist attraction for people to see and watch some animal attractions. Orangutans that live in Surabaya animal park cannot be touched especially for taking pictures together. So, only history and life can be traced there.

Another example of the best place in Indonesia to see orangutans is a Safari park located in the city of Bogor precisely in Cisarua. You can find forest people in their habitat by car around the artificial forest or you can touch and also take pictures with them.

Once the importance of guarding orangutans and endangered orangutans in Indonesia threats and conservation. Safari Park entrance tickets are quite expensive but can satisfy your desire to be able to play and see funny and adorable forest people.

Prigen Safari Park is the widest safari park in Asia, which is located on the slopes of Mount Arjuno, District Prigen, Pasuruan Regency, East Java. Is a zoo that presents fauna life like orangutans.

In this place, you can interact with orangutans directly, either take pictures or play. A very wide place and also a cool scenery is perfect for traveling with family while looking and seeing the fauna.

Taman Safari Bali is the best place in Indonesia for orangutans. A very wide place is made almost similar to the atmosphere in Africa. This place is an attraction for foreign tourists to spend vacation time with family. Some examples Indonesia orangutan habitats and conservation.

In Safari Park Bali many species and also specimens in it include originating from Africa and several other countries. Indeed, the entry fee is quite expensive, but the facilities that can be felt are also very satisfying. One of the cute and packaging fauna is an orangutan, you can play and also take pictures with them.

Some of the best places in Indonesia to see other orangutans are:

Such is the explanation of the 13 best place in Indonesia to see orangutans. Hopefully become knowledge and also a reference for your trip with your beloved family. See you again in the next article.