Home » Fauna » 10 Reasons Why Orangutans Are Endangered in Indonesia

10 Reasons Why Orangutans Are Endangered in Indonesia 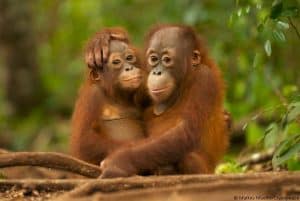 Orangutans are the only great apes in Asia and can only be found on the islands of Borneo and Sumatra. Other great apes are gorillas, chimpanzees and bonobos live in Africa. Orangutans are divided into 2 species namely Pongo pygmaeus who live in Kalimantan and Pongo abelii in Sumatra.

Deforestation is a massive reduction of forests. These forests are cleared, for example, to be used for palm planting, transmigration land for settlement, forest fire and illegal logging. As a result, the forests that are home to orangutans are increasingly depleted and threaten the survival of these animals. Moreover, the forest where they live has been cut, often for oil palm plantations. This condition triggers more hunting and therefore the animal trade. More forests lost to oil palm, easier to get orangutans.

Baby orangutans are often kidnapped from their mothers for sale again as pets. this kidnapping of infant orangutans generally involves the killing of its mother, so that every single kidnapped baby kid, one adult mother dies.

A few years ago, a Taiwanese television show featured a baby person as a pet. Suddenly, the demand for orangutans soars. Up to 2,000 baby orangutans are captured and sent to Taiwan for pet trade. Researchers estimate that more than 6,000 orangutan mothers are killed and 4,000 babies are caught dead to supply 2,000 pets, as only about one-third of those arrested survive.

Many orangutans are hunted by humans, because it enters the territory of the plantation of a citizen or company and steals its food so that it is considered a pest by humans. In addition, orangutans are hunted for their skulls for sale at a high price. Hunters are not specifically looking for orangutans, focusing on meat. But if orangutans are found, they are brought for sale as pets. Maintaining great apes is also seen as a “status symbol” among rich classes.

Female orangutans are adults when they are 10-12 years old, while males are said to be adults when they are 8 years old. Orangutans that live freely in nature begin pregnant and give birth to the first baby when aged 9-12 years, the condition is different from the first pet orangutans usually at the age of 7-8 years. Species of female orangutans experienced a period of pregnancy for 9 months. Female orangutans can give birth 2 to 4 times with a birth distance of 3-5 years and even more than 5 years. This primate breeding is long or requires a longer time when compared to other primates.

Forest and land fires not only threaten human life, but also animals and plants in the fire area. Wildlife that is easily threatened by forest fires and exposed to smoke is the Sumatran tiger and elephant. Fires have also caused the Sumatran elephant roaming route to change. Changes in elephant roaming routes can be fatal. Elephants will take routes that penetrate into the settlements of citizens that can cause conflicts.

In Kalimantan and Sumatra, illegal logging is still common. When trees are cut down, they not only make the ecosystem disturbed, but also the lives of orangutans are disturbed. Orangutans are also increasingly being killed when their forest habitat is cleared so that they are pushed down into the fields and plantations of citizens. Meet orangutans in places like that, frightened or angry citizens then kill. Orangutans multiply very slowly. The study says that a population will probably go extinct even if only one reproductive female per 100 adults is annihilated each year.

The number of orangutans is estimated to decline mainly due to the loss and fragmentation of orang-utan habitat due to forest conversion into plantation areas, plantations, mining and other infrastructure development. The narrowness of forested areas that are habitat of orangutans is driven by forest conversion activities into plantation and plantation areas, forest loss in logging areas is not as large as in these two types of areas. Of course this decline in orangutan population needs to be controlled.

The future Climate change is expected to be a serious threat to the conservation of orangutans, especially in the aspect of the availability of food sources due to disruption of the system of inflorescence and tree fruits that are the source of feed because of the rise in temperature and rainfall.

Another threat is the loss and destruction of habitat due to forest fires triggered by the symptoms of climate change. The 1997/1998 forest fire known to be triggered by the El Nina phenomenon has triggered the burning of millions of hectares of forest, including orangutan habitat and caused significant numbers of orangutans casualties. The phenomenon of climate change in that period of year was also known to have influenced the pattern of flowering and forest tree deformation in Kayan Mentarang National Park of East Kalimantan, which influenced the life of various species of animals.

About 60% of orangutan foods are fruits such as durian, jackfruit, lychees, mangoes and figs, while the rest are leaflets, insects, soil, tree bark and sometimes eggs and small vertebrates. They also not only get water from fruits but also from tree holes. The threat to the orangutan population is the loss of forest habitat into oil palm plantations, mining, road clearing, legal and illegal logging, forest fires and hunting. With these threats, they will automatically lose their source of food in the forest.

Those are the reasons why orangutans are endangered in Indonesia. Not only government, but also Indonesian people should support orangutan conservation to preserve the orangutan poplation in Indonesia.

30 Facts About Indonesian Lifestyle That Are Very Unique