The Brief History of Indonesian Art 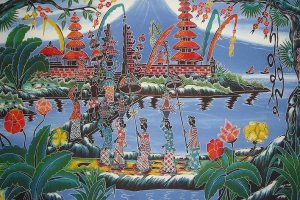 Studying Indonesian art means studying Indonesian culture to know how Indonesian people see the world and how the history of life of the nation of Indonesia itself. Art has many branches, namely musical art, fine art, literature, and performing art.

All branches of art can be used for understanding how the owner perception or principal in seeing the world. Even, through the artwork, you could now what is something that trending in that era, so you can learn the history. Here, we would explain about history of Indonesian art.

The best art legacies in this era were broken stone tools, such as; cutlery, pounder and ax. The tools at work were made of stone, bones, and horns. Most of the tools that used in Paleolithic are not found in today’s tools, but the tools at that time had already had the good art. It could be signed from the symmetry pattern on the tools. There were also two cultural arts, Pacitan and Ngandong. In Pacitan there were found hand stones and small sharp tones. While in Ngandong, there were found the tools made of long bones tapered like needles, spoons, karpan from the ray tail.

The people in Mesolithic era inhabited the shack houses that were located near the seashore. The objects that found were handheld stones and stone food giver. The sense of art in this era was expressed through the decoration of the things in the form of straight scars that were parallel like the eye scratches. The important work at in this era was the paintings on stone walls especially in the eastern part of Indonesia.

In Neolithic, humans being had little bit developed. The people in this era were living in a group and in a settlement. They also had been familiar with farming, raising, and weaving. Due to their knowledge at agriculture and maritime, it birth some of work arts such as  pottery, wooden fabrics, wood and stone combination, stone arrowheads, mortar and pestle, beads, fine pickaxe, ornament of shell and bean seeds.

Relatively important cultural heritage was the memorials of menhir, ancestral seats, altars on the top of terraced buildings, crates and sarcophagi and statues, and figures carved out from the large monolith stones. While in the bronze era, the important art heritages that had been found were the basic skills of the ancestors in metal smelting and blacksmith.

In this periodical time, Indonesia started to dare in contact with various foreign worlds entering through the ports spread in all the part of nations. There were also assimilation and adaptation of Indian culture through Hindus and Buddha beliefs. The marriage between the foreign traders and local people of Indonesia bore the various complex cultures.

In the Hindu-Buddhist era, many kingdoms established, ranging from small kingdoms to large empires. Almost all kingdoms have inheritance in the form of inscriptions. Some of them had the unique cultural styles. The Establishment of temples, monuments, rock artifacts, clothing, jewelry, instrumental weapons, music, dances and pastor’s behavior were other forms of the art relics.

The first Islamic Kingdom that emerged in Sumatra gave the influence toward the art development of Indonesia. However, the art development in Indonesia was focused into the Islamization process in Java. It could be seen from the role of 9 wali who tried to widespread Islam to Javanese people through the cultural art. The form of cultural art such as gamelan musical instrument, shadow puppets, and ketoprak still exists till today.

This period was championed by Raden Shaleh, the son of a nobleman who painted the style of writing pattern towards modern art-based. One of his artworks was a painting between life and death.

This period lasted in around 1878. Indie Mooi is a painter who painted naturalistic object and only visually pleasing but poor of creativity. This was because they were in a fierce battle between Napoleon in Europe. One of his paintings that famous was Thai girl.

At this time, Indonesian artists fought for the identity of Indonesian art. At this time founded an organization called PERSAGI (Persatuan Experts Indonesia). It was aimed of developing painting among the nation of Indonesia by giving freedom in the shedding of the soul and heart without any setting rules on the technical used.

Japan took part in the development of art in Indonesia through a group of painting which founded by Keimin Bunka Shidoso as propaganda forming to the empire of East Asia. Ten, the 4 figures of Indonesia consisted of Ir Soekarno, Moh. Hatta, Ki Hajar Dewantara, KH Mas Mansyur also formed an organization named PUTRA (Center for People’s Manpower) which was dissolved by Japan in 1994.

After the independence day of Indonesia, some art flows were born in this era. Some famous painters in Java and Bali gave the different color in the art development of Indonesia. Basuku Abdullah, Afandi were the names of great people in the development of art in Indonesia. There were also with other many arts that began to penetrate in various sectors. Performances, dramas, operas, and music (dangdut) has become a major commodity to attract the people’s attention.

To support the development of art, at this time was also formed various organizations in the field of art, such as SIM (Young Indonesian Artist), Taman Siswa, Painters of the People who then joined the third organization ASRI (Akademi Seni Rupa Indonesia).

Started to spread their existence, Indonesia inaugurated many art education to give birth for talented artists such as ASRI, Guru Gambar, Balai Perguruan Tinggi ITB, and many others. This era began in 1974 with the emergence of new groups of young artists. This era was the beginning of the originator of various kinds of art in Indonesia as like today.

The Brief History of Scouting in Indonesia