In Indonesia, it’s not so surprising that you can find other natural places in here beside the modern places that usually crowded with people. Some islands like Papua or Borneo certainly has wide areas of them, that mostly consist of tropical rainforest. 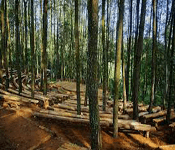 The first one is the Pine Forest called Mangunan, that is located around the area of Yogyakarta city. It’s actually 23 km from there. You can go here safely by using some vehicles like motor cycle, cars, or maybe bus that you rent from the city.

In here, the place is basically already preserved for the tourist. So, the management built this place to be as cozy as possible by providing wooden benches and also tables. The visitors can also enjoy calmping in here, which is a must do thing in here. 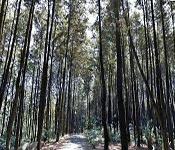 Next one is Mount Pancar Forest. As you know already, this forest is located around the area of Mount Pancar, Sentul. It’s not to far from the city of Yogayakarta above, so if you still have some stamina, cheking this place after visiting Mangunan would be great.

The forest is safe enough for visitors, even though they are still completely natural. You cn see the difference between this and the forest above. In here, the visitors would rather enjoy taking exotic views of the forest than resting or relaxing. 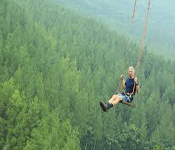 The Lodge Maribaya is actually famous for its Keraton Cliff, which is usually used for taking pictures by many photographers. But, the forest under it can not be missed. The Lodge Maribaya also has one forest that looks very cool.

The weather in here is pretty cold, just like the other pine forests in Central Java areas. Lodge Maribaya can give you another amazing view of a pine forest. Don’t forget to hop on Skytree, the best photo spot. 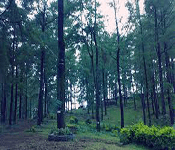 We switch to another island now. An island locate just beside Borneo, called Sulawesi. In this island, there’s one pine forest calld Malino Forest. This forest located right in the area of Gowa, Sulawesi, with the alias name of Tinggimoncing Pine Forest.

As you can see on the picture, the road to go here surely isn’t so wide. So be sure to pick the right vehicle to come here. Motor cycle would be the best one. Beside having an amazing view of the pine trees, the calming weather there is also very relaxing. 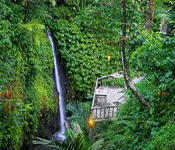 We will go to the Java again, to the Central Java province. Surely you’ve known that there’s a city there called Semarang. Actually in Semarang, there are some forests that worth remembering. But surely anyone would remember the name of Kayon Forest.

Just like the other pine forests, you can always find pine tress everywhere on the spot. But there’s one thing to notice in here. In the specific spot, there’s this tree that has a very unique benchy form. So you can use it as a bench for you to sit. 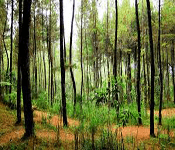 Magelang city is not only known for having such a beautiful heritage items like Borobudur temples or the other temples that located on its area. But, you can see another thing that is also interesting that combined with the nature.

The venue is called Kragilan Pine Forest. The forest is very unique because, there’s twin roads that connecting one way to another right in the middle of the forest. So, if you’re in the middle of it, you can capture some of the best pictures in here. 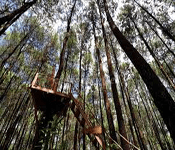 The next pine forest is located in East Java, in Madiun city to be specific. Many people knew about this place because of the feeds at social medias like Facebook or Instagram. The place is surely instagrammable, but what can you have here other than that.

In Nongko Jajar, there are several good items to try like playing chess in the middle of the forest, or picking Cocholate fruits right from the trees. Once, the place called Nongko Ijo because of the existence of endemic fruits in this location that called as Nongko. 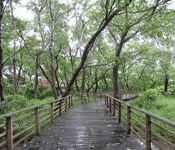 Many people come here to enjoy the view of it of course, but not for that alone. People really interested in the monkeys that inhabit the forest. They inderectly help the management to spread the mangrove seed all around the place. 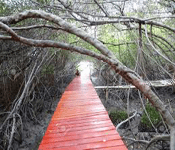 The next mangrove forest is actually located in a place called Rembang. If you don’t know where Rembang is, it’s located right in the province of Central Java. The place is usually filled by the tourists during the weekend.

Not only that, during the long holidays like this, the numbers of visitors will keep increasing until the holiday is gone. Many people love it because it’s a bit hard to find a mangrove forest that looks as beautiful as this forest in Central Java. 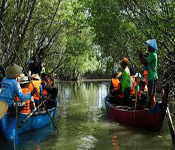 Tapak Tugurejo is also one of the mangrove forests of Central Java, presicely located in Semarang city. You can find this forest in the Tugurejo area near the northern beach of Semarang. This forest is very useful to prevent abration.

Many people will come to this place especially during the evening, to capture the images of beautiful sunset from this spot. You can reach this place by renting the traditional vehicle called Andong or Delman, which is very affordable. 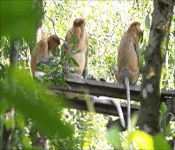 The next mangrove forest is Tarakan Forest, which is located on the area of Borneo island. To be specific, the Tarakan forest exists in the area of Tarakan, East Borneo. It has about 21 hectares wide covered with so many kinds of mangrove.

Not only the tourists, some times you can find some reseachers that checking the place oftenly. It;s pretty normal, because there’s also mangrove research on the area, with the purpose to maintain the condition of the forest. 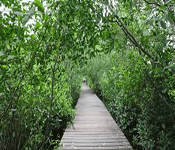 The 12th attraction on this list is very family friendly. Located in the Sumatra island, in North Sumatra, the place is having two kinds of attraction in the same location, the beach and the mangrove forest.

So, visitors can enjoy two attractions at one price. Surely it’s a good deal, right?  After enjoying the green wide mangrove forest, they can also do some things on the beach like playing sand castle or any other water sports.

Aside from those 12 forests mentioned on the explanations above, we also have the three mangrove forests left for you to visit. All of them located in the Java island, which is always been a very accesable place that has some forests to offer as best jungles in Indonesia.

So that is our list of the best jungles in Indonesia. For you who want to do the adventure like Tarzan, or other fiction character who always dwells on the jungle, you can also try to visit the conservations in Indonesia.

Beside it’s safe, the conservations can introduce you to the new animals taht you haven’t known before. So, it’s advisable to visit the forest attractions above or the conservations available in your nearest area than having a challenging yet dangerous adventure of jungle trip when you’re not really ready yet. Maybe you need some training first if you want to really feel how challenging it is to be live on your own on the wild.