14 Facts About The Endangered Javan Rhino 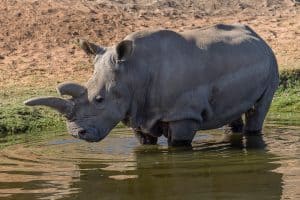 Indonesian native animals are indeed many types, but the increasing age of the earth and the development of technology.

So one by one these endemic animals become extinct over time.

The result of animal extinction is caused by human and natural behavior, such as poaching, animal exploitation and forest encroachment into gardens and settlements.

One of the extinct animals native to the island of Java, the Rhinoceros. Hence the top Sumatran Rhinoceros facts about the characteristics.

This animal has become extinct due to the horn and its body parts are used as consumption of some people, which are sold in illegal markets. It is very sad and unfortunate that to this day animal trade is still happening. Therefore, this time we will discuss the facts about the endangered Javan rhino which can be known from the following explanation:

Rhino animals are well known for their food which consists of plants, grass, leaves, fruit, also vegetables. The wisdom of these mammals consuming herbivorous food makes animal Javan rhinos interesting to learn about their life as well as their breeding. Interesting fact because rhinos are good at sorting out healthy and unhealthy foods. Life of Javan Rhinoceros facts habitats and conservation.

Rhinos have a rhinoceros body length of about 3 meters, about 1.5 meters high. His legs look short compared to his big body. Because of its unique body shape, rhinos can only move back and forth. This body shape is also useful for adding strength as he runs attacking with his horn. Javan rhinos have no predators except hunters. So naturally, there is no predator as an enemy.

3. The Javan rhino is able to run very fast

The fact about the endangered Javan Rhino is that although rhinos are short-legged and heavy-bodied, the rhinoceros can run around 50 km/hour.

Even motorbikes are able to be defeated by this Javan rhino in speed. So, make no mistake even though it looks heavy, and large rhinos become the fastest animals among other animals such as buffalo, cows and so on. The following are the best places for wildlife Indonesia that you should know.

4. Rhinos do not only exist in Java

Although called Javan Rhinos, this animal does not only live on Java. The Javan rhino was once found throughout Southeast Asia, India and China. However, the population has diminished due to hunting, disease, loss of forest in residence, and other problems.

Javan rhinos are endangered mammals. In Ujung Kulon National Park on the island of Java, there are only about 40-50 rhinos. In the Cat Tien National Park, Vietnam, there were only about 8 rhinos in 2007. So the development of rhinos was very large, but now only on Java and Sumatra.

5. Javan rhinos are afraid of humans

Furthermore, the facts about the endangered Javan Rhino are rhinos avoiding humans in their interactions with nature.

This is because there are many rhino hunts and things done by humans. Javan rhinos usually avoid humans. That is why researchers rarely research Javan Rhinos directly. Because it is very rare, researchers are afraid of disturbing the living environment of these rhinos.

To study the behavior of the Javan Rhinos, researchers usually use cameras. The researchers also examined the dung of these rare animals to find out their health and the life of rhinos in their environment. Unique things that you must know are the interesting facts of Sumatran Rhinoceros.

This wallowing hobby is to maintain body temperature and prevent diseases and parasites on the skin. The Javan rhino does not dig its own mud puddle.

He prefers to use other animals. The pool of the findings then enlarged using the horn. It’s interesting, isn’t it? The cute rhinoceros pattern is also adorable.

7. Rhinos are very protective in caring for their children

Rhinos will become very fierce and aggressive if their children are disturbed by other animals. Although rhinos do not have predators, for young children, many predators will hunt them. The calm of rhinos is disturbed when their children feel insecure.

Therefore, be careful if you visit the zoo and want to see this animal, do not disturb the peace of the child. Here are a few the facts about Indonesia natural resources.

8. Become an extinct animal after tigers and elephants

The facts about the endangered Javan Rhino, the rhinoceros being an almost extinct animal in Indonesia. His life began to be the target of illegal hunters who wanted to use their horns as medicine and so on.

Not to mention the native habitat of rhinos in the forest began to erode encroachment, forest fires, evictions for plantations and settlements make these animals disappear slowly.

Therefore, the importance of captivity as a place of rehabilitation also breeds a new generation of rhinos. Because if it becomes extinct, the next generation will not be able to find this animal again.

Of course, you understand, isn’t it, if rhinoceros has unusually strong skin thickness. Her skin has a thickness of about 1.5-5 cm. The skin layer is formed from a thick layer of collagen.

Despite having thick skin, the skin is quite sensitive. Especially sensitive to sunlight and insect bites. No wonder if his skin is injured, rhinos often wallow in the mud.

This is an attempt to protect sensitive skin, usually, these large-bodied animals smear their own body with mud. Some variety and  types of Monkeys are in Indonesia you have to know.

Rhinos have 1 or 2 horns in the middle of the forehead. If there are 2 horns, one of them is in front of the other horn or not side by side.

The horn can grow to a size of 1 meter. The horn is different from the one with the only bone core. Keratin is the main constituent of a horn. So that the horn looks more like a human nail completely composed of keratin.

Many believe that crushed rhino horn is believed to cure fever and aphrodisiac effects. However, given the species that are becoming rare, traditional treatments using rhinoceros horn trigger conflict. Because that is what makes many people hunt the rhinoceros.

To find out more about the uniqueness and facts about the endangered Javan Rhino that you can know, namely:

Therefore, it is fitting that we can preserve the life of this endangered animal. And continue to urge not to hunt wildly and keep the forest sustainable. Hopefully, an explanation of the facts about the endangered Javan Rhino will be of benefit to you all.