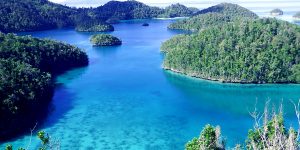 Speaking about Indonesia, of course, there is a lot of uniqueness, diversity, culture, customs, natural wealth, buildings, and so on.

As a country rich in resources, it is not surprising that Indonesia’s natural wealth has become the target of many countries, for example, PT. Freeport Indonesia.

Natural resources when used properly and not excessively will certainly last a long time and certainly can be enjoyed until later the next generation.

Indonesia’s natural resources which make Indonesia a supplier of world natural resources, types of exports from nature have been sold to many foreign countries. One example of natural resources being exported in the forestry sector such as rattan, teak, in the marine sector is sold a lot of shrimp, lobster, snapper and many others.

The following will explain the facts about Indonesia other natural resources, which are certainly very useful and interesting:

1. Indonesia is Rich in Sea Resources

Indonesia’s marine wealth is famous for its results such as fish, pearls, shrimp, coral reefs and many others. Some of the proceeds are exported to world countries, some are sold domestically. The proceeds from selling to the country are one advantage in the form of foreign exchange.

One example of facts about Indonesia natural resources is coffee. Coffee is a favorite beverage in the world. And coffee that is recognized as the best coffee because of its delicious taste and the most expensive coffee is civet coffee.

Brazil may be the largest coffee producing country, while Indonesia is in third place. But the example of civet coffee, the coffee produced with dirt by this civet is originally from Indonesia. Although expensive, phenomenal coffee is sought after especially by coffee lovers.

3. Indonesia Has Rare Animals That Are Komodo

Now the popularity of Komodo dragons, especially after being chosen to be one of the 7 wonders of the world increasingly global. Komodo is an endemic animal typical of East Nusa Tenggara, and appropriately this animal becomes an animal that is being nominated by the state and also the people of Indonesia.

4. Indonesia is Rich in Gold Mines

The best quality gold mine in the world is in Papua. Gold production almost reached 40 kilos. This gold mine production is managed by a large company, PT. Freeport and Indonesia.

With the existence of this mining company, the good impact for Papu people is the human resources used in hiring employees in the mine production process. Until now gold production is still ongoing. This is a fact about Indonesia’s natural resources that must be maintained.

ERTAMINA, this state-owned company has started competing in the global market. And become one of the gas producing companies for Indonesia.

6. Indonesia is Rich in Coal Mining

One of the facts about Indonesia natural resources is coal. The largest coal mine, which is coal which is also no less valuable in the world, turns out that the biggest place is also from Indonesia.

From various international media, it is stated that Indonesia has the largest source of coal mines in the world. Potential has been managed by PT. Bukit Asam, and become one of the largest companies.

7. Indonesia Is Rich in Agricultural Products

The best soil fertility is in Indonesia. There is no doubt about the very fertile quality of our land. Almost all the land in our country can be planted with any plants.

Like crops, rice, sugar cane, fruits and so on. There are some agricultural products that are exported abroad as one of the country’s foreign exchange earners. However, there are some farms that are imported to cover the shortcomings of our country, because post-harvest fails due to nature. Facts about Indonesia natural resources that generate a lot of benefits for the community.

8. Indonesia is Rich in Forests

Indonesia’s tropical forests are the largest forest in the world, even all countries in the world call Indonesia the world’s largest lungs.

The forest is located on the islands of Sumatra, Kalimantan, and Sulawesi. This earth is very dependent on this tropical forest to maintain the climate balance because the Amazon rainforest is not strong enough to balance the Earth’s climate and preserve the natural environment and humans.

9. Indonesia Is Famous For Beautiful Tourism

Another example of the facts about Indonesia natural resources is interesting and beautiful tourism. The largest exotic tourist attraction in the world such as the Borobudur temple is one of the largest Buddhist temples in the world. Komodo Island is located in a strait between the island of Flores in East Nusa Tenggara (NTT) and Sumbawa in West Nusa Tenggara (NTB).

On Komodo Island, there is the largest lizard in the world, the Komodo lizard (Varanus komodoensis). This island is one of the most beautiful islands in the World. Then the island of Bali is the best tourist island in the world.

The island of Indonesia has the largest number of islands in the world which according to satellite imagery studies amounted to 18,306 islands, the island of which was named was 7,870 while those that had not been given a name numbered 9634 islands.

Where each island has unique characteristics and culture that is interesting and unique to explore if you want to vacation you don’t need to be far away. Just explore the island in Indonesia which is definitely interesting and exotic.

Another example from the facts about Indonesia natural resources is as follows:

These are some of the facts about Indonesia natural resources in Indonesia. Hopefully, you can increase your insight to find out about this rich country, the beloved country of Indonesia.